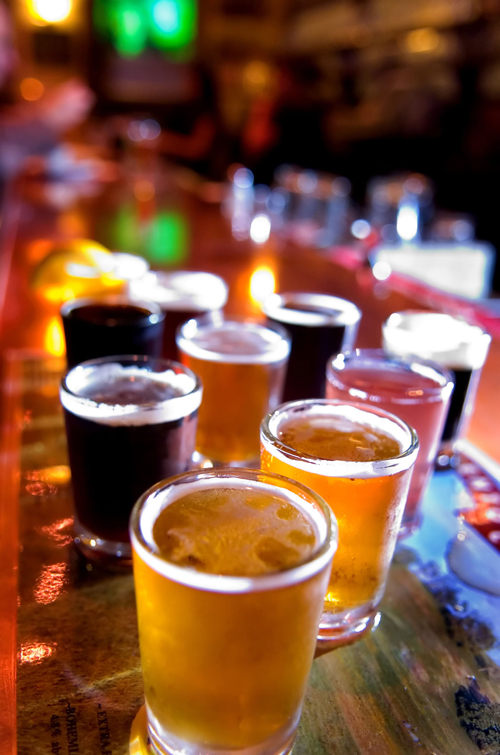 Bay Area researchers probing the brain for genetic factors behind alcoholism found one more piece in the complex puzzle of the condition, according to a study published this week in a leading neurology journal.
Scientists with a research center run by the University of California-San Francisco found that a genetic variation, which produces lower-than-normal levels of the feel-good brain chemical dopamine, were strongly linked to impulsivity - one of the hallmarks of alcoholism.
"That's the major finding of this study," said Dr. Howard Fields, a neurologist and one of the study authors.
Fields works at the Ernest Gallo Clinic and Research Center, focused on the biological basis of alcohol and substance abuse. The article was published Wednesday in the Journal of Neuroscience.
"With this gene variation, you have almost double the chances of being impulsive," Fields said.
Dopamine is a neurotransmitter that induces pleasurable feelings, and is sometimes called "the courier of addiction," since many disorders, such as alcoholism and narcotics abuse, are linked to a powerful urge to create a "dopamine rush" by imbibing or injecting.
With this finding, neurologists can keep refining their targets for developing drugs that might ultimately help alcoholics kick the habit, Field said.
"There won't be a pill that can cure alcoholism," Fields predicted. "But there will be a pill you can take that, in combination with psycho-social strategies (like Alcoholics Anonymous programs), will make alcoholism much more manageable."
But Stanton Peele, a New Jersey-based social psychologist and author of the 2007 book, "Addiction Proof Your Child," among several other books on addiction, noted that researchers have long sought in vain for an effective treatment for alcoholism and have few tools in their arsenal.
The paucity, he believes, is because value systems, not biological factors that lend themselves to medical treatment, largely determine why some people drink so heavily as to disrupt their lives.
"Values - both as taught to kids and as young people mature - are the main preventatives to and antidotes for addiction," Peele said.
He pointed to the fact that a 2006 survey on substance abuse from the Department of Health and Human Services shows that heavy alcohol use among U.S. adults decreases with age, from 15.6 percent of 18-to-25 year-olds to 1.6 percent aged 65 or older.
Heavy drinking is defined as five or more drinks in one setting on at least five occasions during the past month.
Genetics can't explain that rate of decline, Peele said, but changing values can. As people leave behind the excesses of youth and settle down to raise families and launch careers, meeting those responsibilities takes precedence over succumbing to an urge to let loose, he said.
Fields, the neurologist, responded that, "It's always a combination of genetics, your (present) situation and your previous life history. These things are not mutually exclusive," he said.
"That's why some behavioral programs, like Alcoholics Anonymous, can be very successful," Fields continued. "Because they change your situation, they change your peer group."
But for others addicted to alcohol, he said, that's not enough, and they slip back into old destructive habits. The study published this week added to hopes that stimulating dopamine production in alcoholics might prove effective in ending their cravings, at least for those with a deficit in dopamine levels.
The researchers used magnetic resonance imaging to scan the brains of 19 study participants, who had an average age of 29. Nine reported they had been alcoholics, but no longer drank, a group the study authors called "abstinent alcoholics." The other 10 reported no history of substance abuse.
Of the 19, roughly half had a genetic variation that led to lower rates of dopamine production, compared with the other participants.
About one-third of the U.S. population has this genetic variation, added Charlotte Boettinger, a behavioral neuroscientist and lead researcher of the study. The brain scans found that those with the genetic variant had nearly double the rates of impulsive behavior, measured by asking participants to choose between receiving a sum of money - in one test it was US$80 - immediately, or waiting a month to receive US$100. Those requesting the immediate payment were deemed impulsive.
A number of studies report that a majority of alcoholics exhibit impulsive behavior.
"We found a genetic link to important decision-making behavior," said Boettinger. "I'm hopeful that (this study) adds data to the argument that there are brain mechanisms that contribute to alcoholism," Boettinger said.