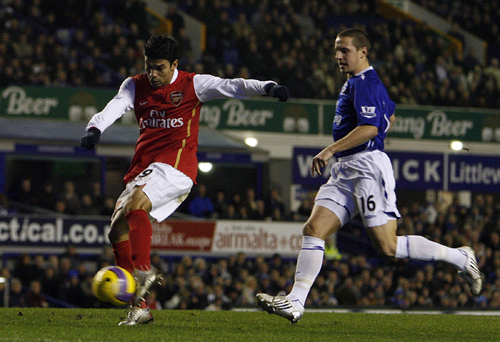 Arsenal will start 2008 as leaders of the Premier League after coming from behind to beat Everton 4-1 in a controversial encounter at Goodison Park on Saturday.
A stunning four-goal second half performance by Arsene Wenger's side sent the London club two points clear of Manchester United.
Australia international Tim Cahill had sent Everton into a first-half lead before Eduardo's first two Premier League goals put Arsenal in control.
Substitutes Emmanuel Adebayor and Tomas Rosicky scored in the closing stages to round off a stunning victory.
But both sides finished with 10 men after Arsenal's Nicklas Bendtner and Everton's Mikel Artera were dismissed in separate incidents towards the end.
Wenger believes his side's fightback shows they have the character to win the title.
"We are there and we believe we can do it," Wenger said. "It's always better to only rely on your own results and you can afford that when you are top.
"To come here, be 1-0 down at half-time and win 4-1 shows the outstanding desire and hunger in the team.
"Everton made a real battle of it but we were outstanding physically and took advantage of their mistakes."
Furious Everton boss David Moyes insisted Bendtner's foul on Andy Johnson was more worthy of a red card than Arteta's elbow on Cesc Fabregas.
"You can come and look at Andy Johnson's shin and see if that deserved the same card that Mikel got for Fabregas's broken jaw...at least I assume that's what he's got from the way he rolled about," Moyes said.
"I thought we were better than Arsenal and the better team lost. We gave them a really tough game and they probably can't believe they've come away with a 4-1 win."
The visitors kicked off as if unaware that United had lost. Arsenal's title challenge has been built on fluent, attractive, free-flowing action yet Wenger's side looked a shadow of themselves as the hosts quickly stamped their authority.
And they had still not tested home keeper Tim Howard when Kolo Toure hit the ground clutching his face in the 16th minute, the Ivory Coast star suggesting he had been struck by something thrown from the crowd.
Toure was able to continue after treatment but his recovery failed to prevent Arsenal from falling behind after failing to clear Arteta's 19th minute corner.
The Spanish winger's floated set-piece struck Bendtner on the knee but the big Dane was unable to clear the ball allowing Yakubu to strike from close range.
Cahill, who was standing next to Yakubu, celebrated as though he had scored although television replays appeared to show that the Nigerian hot-shot had got the final touch.
After the goalless stalemate against Portsmouth three days earlier, Wenger's men were looking to avoid an unwanted statistic.
Not since April had they failed to score in back-to-back Premier League outings yet French boss Wenger opted to relegate Emmanuel Adebayor, scorer of 10 top-flight goals this term, to the bench. As it was, Yakubu posed problems for the visitors' defense.
But having looked well on course to clock up a seventh win in eight games, Everton undid all their early hard work by conceding twice inside the opening 15 minutes of the second half against a rejuvenated Arsenal.
A long punt from Gael Clichy, which Phil Jagielka failed to cut out, found Eduardo lurking on the edge of the area and the 24-year-old showed great composure to beat Howard - Arsenal's 800th goal under Wenger.
Everton should have regained the lead in the 57th minute but Yakubu, unmarked on the edge of the six-yard area, headed Joleon Lescott's cross wide.
It proved a costly miss as Arsenal recovered from that scare to take the lead in controversial circumstances.
Eduardo again got the better of Jagielka before producing another clinical finish although Everton players protested that the Brazilian had used his arm in the build up to the goal.
Nevertheless, referee Martin Atkinson was unmoved and Arsenal's lead stood.
Arsenal finished with 10 men when Bendtner rounded off a game to forget by getting himself dismissed for an ugly 74th minute challenge on Everton substitute Johnson.
Even that failed to blunt the Gunners as Adebayor capitalized on a defensive howler by Joseph Yobo to walk the ball into the net 11 minutes from time.
Arteta was red carded in the 84th minute after catching Fabregas with his elbow before Rosicky topped a crushing victory with a stoppage time goal.