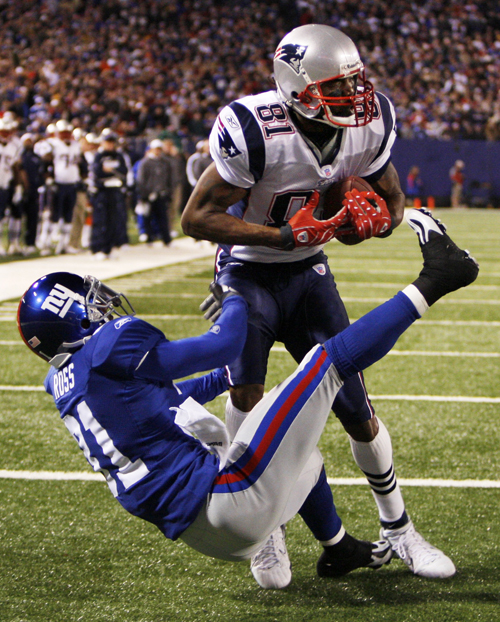 Tom Brady and Randy Moss set records and the New England Patriots put themselves among the greatest sport legends in American history Saturday by completing an undefeated season.
Brady threw two touchdown passes to Moss, giving each an all-time one-season scoring mark, and the Patriots finished the National Football League's first perfect season since 1972 with a 38-35 victory over the New York Giants.
"We're going to enjoy this. It only happens once every 35 years," Brady said. "We will enjoy it and then we will get back to work."
The Patriots finished 16-0 and rewrote the NFL record book in the process, completing the first undefeated NFL regular season since the Miami Dolphins went 14-0 in 1972, six years before the league adopted a 16-game schedule.
Miami has completed the only perfect championship run with two playoff triumphs and a Super Bowl crown. The Chicago Bears had gone undefeated in 1934 and 1942 but lost the NFL title game each time.
"Going undefeated in the regular season is a remarkable achievement," said Don Shula, who coached Miami's 1972 champions. "If they go on to complete an undefeated season, I'll be the first to congratulate them."
The Patriots will bid for a 19-0 title run, needing two home playoff victories in January and a triumph in the Super Bowl on February 3.
"To accomplish 16-0, that's phenomenal," Moss said. "It's something we can hang our hat on and enjoy.
"Being a historic season, we can enjoy it for no more than 48 hours. It's the playoffs. Anything can happen. If you lose you're out. No more than 48 hours. Then we get to the nitty gritty and get down to the playoffs."
The title quest also remains foremost in the mind of Patriots coach Bill Belichick, whose Patriots seek a fourth Super Bowl triumph in seven seasons.
"That was some way to finish the season," Belichick said. "They came through the way they have all season. I'm happy. To be able to win them all is great.
"We've got more work coming up. We'll take some time to enjoy what we've accomplished but pretty soon we'll have to turn the page."
The Patriots claimed a 19th consecutive regular-season victory, breaking the NFL record they set in 2003-2004. New England's last regular-season loss came on December 10, 2006, when Miami beat the Patriots 21-0.
New England also set an NFL season record with 589 total points, breaking the old mark of 556 set by Minnesota in 1998.
The Giants jumped ahead 28-16 but Brady connected with Moss on a 65-yard touchdown with 11:06 remaining that gave New England the lead for good and set a pair of NFL records.
Brady's touchdown pass was his 50th of the season, breaking the one-season record set in 2004 by Indianapolis quarterback Peyton Manning.
Brady, who completed 32-of-42 passes for 356 yards, had earlier matched the old mark with a 4-yard touchdown pass to Moss on the first play of the second quarter.
"It was a lot of hard work," Brady said. "I'm proud of this team and the way they responded when we were down. We were down 12 in the third quarter. Now we're 16-0. I just hope we can continue to play this kind of football."
The second touchdown catch for Moss was his 23rd, surpassing the one-season record set by Jerry Rice in 1987. It came one play after Brady was short on a pass to a wide-open Moss.
"I threw a bad ball to him. I just didn't get enough on it," Brady said. "I tried to redeem myself on the next play. It was a good one to go ahead one. For me and my team, that was a big touchdown. It doesn't get any better than that.
"What I'm most proud of is playing a playoff team on the road and we were down and coming back and finding a way to win. We've played some tough games. We really rallied back and showed some mental toughness and character."
Moss joked about cutting the ball in half since each man made history on the play but Brady was content to let his favorite deep threat have the souvenir.
"He's got the ball," Brady said. "I've got my jersey and plenty of memories."
The Giants, who finished 10-6, will visit Tampa Bay next weekend. The Patriots have a bye in the first round before a home game in two weeks.
"It's a bit of relief. We can rest our bodies a little bit," Brady said.
Laurence Maroney's two-point conversion run after the historic Brady toss to Moss gave New England had a 31-28 lead with 11:06 remaining and Maroney boosted the New England lead to 38-28 on a 5-yard touchdown run with 4:36 to play.
But the Giants answered with 64 seconds remaining when Eli Manning threw a 3-yard touchdown pass to Plaxico Burress.
Needing to recover an onside kick to reclaim possession and attempt to score a tying field goal, the Giants were undone when New England's Mike Vrabel recovered the kickoff and the Patriots ran out the clock, then celebrated.
"I'm proud of how we responded in the second half," Brady said. "We didn't play that well in the first half but we made the plays when we needed to."
Manning went 22-of-32 for 251 yards and four touchdowns as the Giants stung the Patriots with the most points against New England all season.