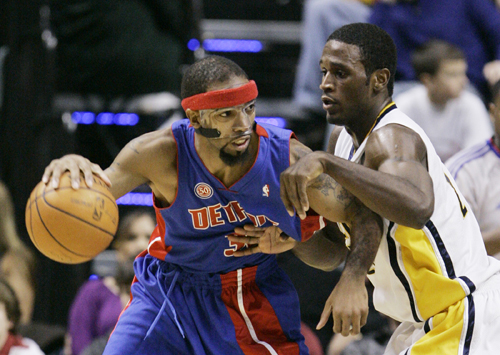 Detroit Free Press
INDIANAPOLIS, Indiana
It wasn't the easy blowout win the Detroit Pistons enjoyed in their first meeting with the Indiana Pacers on Friday.
To win the sequel Saturday, they had to call on their rarely used skills of executing down the stretch. Besides one blip, they did just that, winning their eighth in a row, 98-92.
"We haven't played a game like this in a while," said shooting guard Richard Hamilton, who led with 24 points. "It's fun just to take our time, execute, get to where we want to get to and make the shot."
The Pistons (23-7) held a two-point lead with 1:45 left in the game before out scoring the Pacers, 7-3, down the stretch.
Point guard Chauncey Billups, who scored 17 points and had seven assists and three steals, started things by circling around Marquis Daniels for a lay-up to put the Pistons up, 93-89, with 1:13 left. Then Rasheed Wallace (10 points, 10 rebounds) reached out and plucked the ball from guard Kareem Rush on the perimeter, the last of 14 turnovers for the Pacers.
Billups dribbled the shot clock down before he drove into the lane, while Hamilton popped out beyond the three-point line. Billups found him, and Hamilton knocked down the open three. The Pistons led, 96-89, with 45 seconds to go.
"There's nothing drawn up, that's just us playing together for such a long time," Hamilton said. "I knew when he drove, don't get buried in the corner - pop up. And he found me."
It appeared all but over, but Pacers forward Mike Dunleavy hit a three with 8.8 seconds left to cut the lead to four.
The Pistons then made an uncharacteristic turnover at an even more uncharacteristic time.
Billups threw a no-look bounce pass behind him to Tayshaun Prince. Problem was, Prince (10 points) was no longer in that spot, and the ball bounced over the half-court line, resulting in an over-and-back call.
"I was almost like shocked, like everybody else," coach Flip Saunders said. "I think the only person who was more shocked than him was Tay. Tay was standing right there open for 10 seconds and Chauncey was dribbling all around. I think he thought at that time, he's not going to give it up."
It didn't end up hurting, though. The Pacers missed their final three attempt, and the Pistons completed the back-to-back sweep.
"They are a tough team to beat," Pacers coach Jim O' Brien said. " Certainly we had some good looks. But I would assume after watching the tape, Detroit had something to do with shutting us down."
The Pacers played without starting point guard Jamaal Tinsley. Center Jermaine O'Neal led with 20 points and 11 rebounds. Pistons forward Jason Maxiell scored 12 off the bench.
Point guard Rodney Stuckey played 17 minutes, including crucial time in the tight second half. He scored seven of his nine points in the third quarter, when he looked aggressively for shots. Five of those points game during a 9-0 Pistons run.
"He did some good things," Saunders said, "and he made some mistakes. But that's how you learn."
In other NBA action: Dallas 97, Atlanta 84; Orlando 104, Charlotte 95; Washington 96, Miami 74; New Orleans 86, Cleveland 76; Houston 91, Toronto 79; New Jersey 97, Milwaukee 95; Boston 104, Utah 98; Seattle 109, Minnesota 90.