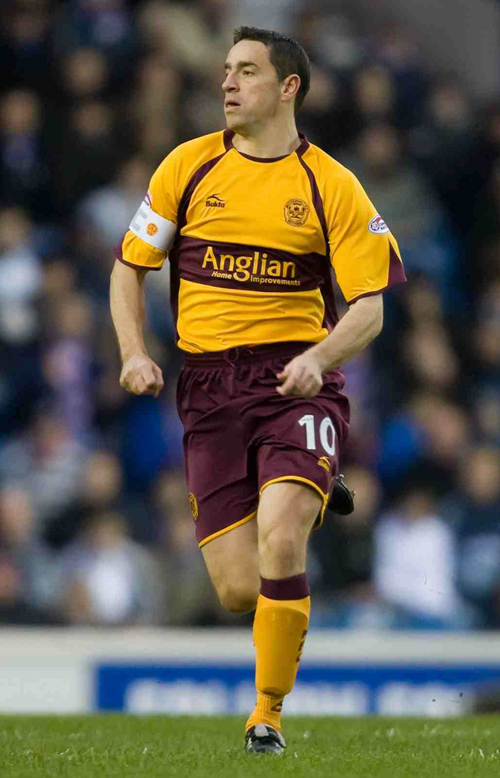 Phil O'Donnell, captain of Scottish Premier League club Motherwell, died Saturday after collapsing during a match.
The 35-year-old midfielder fell to the ground at Fir Park just as he was about to be substituted against Dundee United.
The player was carried from the field on a stretcher and taken by ambulance to a nearby hospital, but the club later announced the death of O'Donnell, who played once for Scotland.
"This is an unspeakable tragedy for Phil's family," Motherwell owner John Boyle said in a statement. "Everyone at Motherwell is shocked to the core and we are sure that everyone involved in Scottish football will feel the same.
"Phil was not only an inspirational player for Motherwell and club captain, but was an inspirational person. All of us at Motherwell are thinking of his wife Eileen and their four children."
O'Donnell, who also started his career at Motherwell before stints with Celtic and Sheffield Wednesday, was about to be replaced by substitute Marc Fitzpatrick but collapsed before he could leave the field.
He was treated on the field for about five minutes before Fitzpatrick came on in the 78th minute of a match that Motherwell won 5-3 to strengthen its hold on third place.
O'Donnell's nephew David Clarkson, who had scored twice for Motherwell, was substituted a few moments later because he was upset by the incident.
Seizure
Motherwell said that its medical staff and that of Dundee United believed that O'Donnell had suffered a seizure, but could not give any more detail.
Chairman Bill Dickie said there would be a post-mortem to determine the cause.
"I don't want to say anything more than how devastated everyone at the club is for his wife and his young children," Motherwell manager Mark McGhee said. "That's what we are all feeling tonight. Nothing else matters."
O'Donnell scored for Motherwell in its 4-3 victory over Dundee United in the 1991 Scottish Cup final.
Former Scotland manager Craig Brown, who gave O'Donnell his only international appearance, said it was "very, very sad news."
"I think everyone in the game will acknowledge what a wonderful player he was and an outstanding gentleman and I would expect to have a minute's applause at every ground in Scotland at the next fixture," Brown told Sky Sports News.
O'Donnell came on as a substitute for Scotland in a World Cup qualifier against Switzerland in 1993.
Cameroon midfielder Marc-Vivien Foe collapsed and died at the 2003 Confederations Cup in France, prompting FIFA to demand a general medical checkup and thorough cardiovascular tests on all players ahead of last year's World Cup in Germany.
Medical improvements have not stopped such incidents, though.
Sevilla midfielder Antonio Puerta died in August following his collapse on the field during a Spanish league match, dying from a weakness of the right ventricle.
Hapoel Beersheba striker Chaswe Nsofwa died of heart failure while training in Israel the same month, and a player from lowly English side Walsall, 16-year-old Anton Reid, died after collapsing in training, also in August.