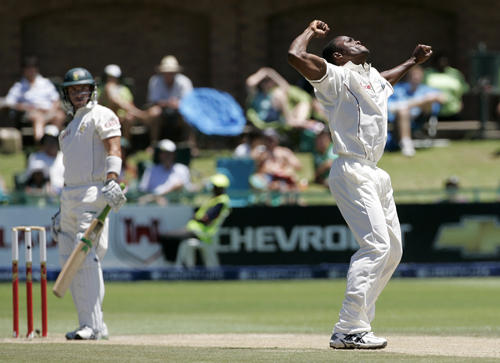 West Indies captain Chris Gayle said his team's 128-run win in the first test against South Africa on Saturday was the highlight of his career.
West Indies dismissed South Africa, who were chasing a target of 389, for 260 to win with a day to spare.
The result marked West Indies's first win in the 10 tests they have played in South Africa.
"It's not the series, but it's a win and it feels really good," Gayle, who was leading West Indies in a test for the first time, told a news conference.
"Beating South Africa in four days on home soil is tremendous, it's my best match so far."
Gayle played down the value his contribution as captain might have had for his team.
"There were a lot of young players involved, and it was pleasing to see the way they operated under pressure," Gayle said.
"Leadership is important, but every player needs an opportunity and I think sometimes people expect too much from players too soon."
South African Graeme Smith accepted that his team had been outplayed.
"We let ourselves down in the first innings with the ball and with the bat," Smith said. "We allowed them to get to a first-innings total (408) that was always going to make it difficult for us to come back from, and then we didn't bat well (to be dismissed for 195).
"We didn't get our basics right, and we didn't adapt to the pitch well enough which seems to be a theme with us here.
"The West Indies showed a lot more determination, and they deserve their win."
The second of the three tests starts in Cape Town on January 2.