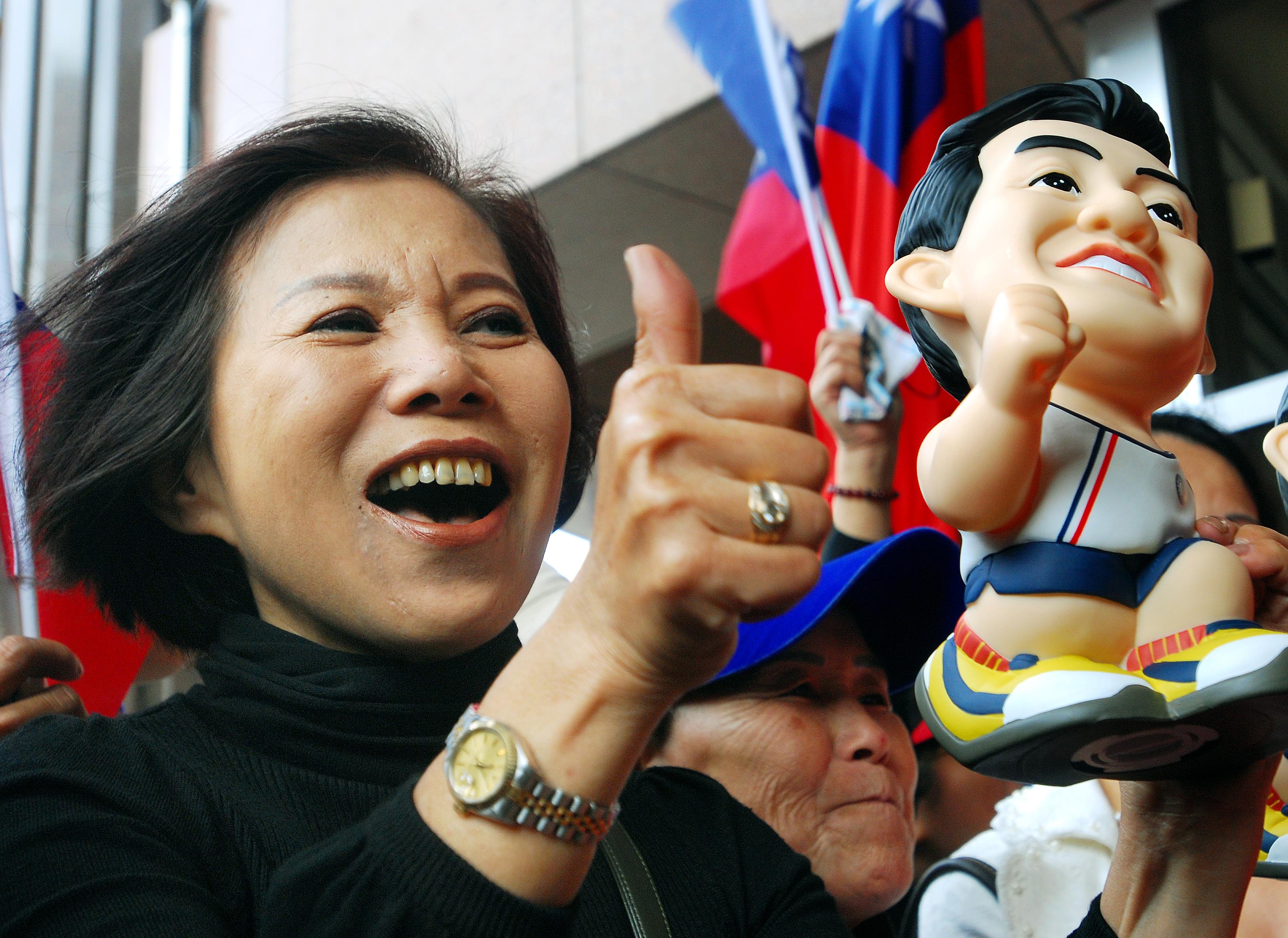 A panel at the Taiwan High Court cleared opposition presidential candidate Ma Ying-jeou (馬英九) of corruption yesterday in a high-profile ruling that frees him to stand in the March 22 presidential election.
Ma, who is the standard bearer for the former governing Kuomintang that favors closer ties with China in the 2008 presidential election, could have been barred from running for president if he had been convicted of corruption and breach of trust.
The High Court panel of judges said Ma was not guilty on grounds that it categorized the special allowances budgeted to him during his tenure as Taipei mayor between 1998 and 2006 as "substantial subsidies" for public functions and was of the view that the mayor had full authority to decide how the money should be used.
In light of the fact that the allowance was a fixed sum and that no supplemental payment was allowed to cover any additional expenses, Ma's decision to deposit part of the allowance to a personal account did not amount to a "criminal act," the verdict stated. Instead, it could be argued that Ma's decision should be viewed in terms of moral, political and administrative responsibility, the judges stated.
"Since Ma used informal notes to draw on the fund and used all of it for public purposes and he did not make any illegal profit, his use of the money was in line with the stated purpose of the fund and does not constitute a crime," the verdict read.
Ma was accused of misusing some NT$11 million in special allowances during his two-term mayoralty from 1998 to 2006. Taipei prosecutor Hou Kuan-jen indicted him on 13 February this year, leading Ma to make a precipitate announcement the same day of his plans to run for the presidency.
The Taipei District Court exonerated Ma in August as the judges ruled that Ma had no intention to embezzle the funds, which Ma described in the beginning as public funds, but later said was a personal subsidy.
The High Court judges upheld the district court opinion that Ma had no intention to make illegal gains when he deposited the remainder of the allowances to his personal account.
Furthermore, he even spent more than the sum of money he collected from the allowances on charity donations, the High Court judges found, reiterating the view that there was no proof that Ma had pocketed the money.
High Court spokesperson Wen Yuao-yuan told reporters the panel of three judges found that "Ma had donated some NT$51 million to various charity groups during his tenure as mayor, while the special allowances he claimed totaled only NT$15 million."
The judges also rejected the prosecution's argument that Ma may have embezzled the funds as he was able to remit NT$200,000 every month to his wife Chou Mei-ching (周美青), though his salary as a mayor was at most NT$150,000 per month.
The High Court verdict stated that Ma would have been capable of remitting that sum to his wife each month because, according to their information, Ma may have been earning as much NT$250,000 per month as mayor. In addition, Ma has huge sums deposited in three bank accounts, the verdict revealed.
The High Court also rejected the prosecution's request to determine whether Ma's use of the fund to take care of a dog was a violation of the law. The court ordered that the prosecutors should launch a separate probe into that matter.
The High Court said in its ruling that the prosecution may appeal the verdict.
However even if the prosecution files an appeal with the Supreme Court, it is unlikely that the a verdict could be reached before the March presidential election, political observers said, indicating that Ma has practically secured a place in the election.
The 57-year-old favorite of pan-blue supporters is now free to press forward with his ideas of closer ties with rival China and an improved Taiwanese economy in the run-up to the presidential election.
Yu Wen, a former city government employee who was also indicted in the case on charges related to 'borrowing' invoices to cover reimbursements to Ma from the fund, was sentenced to one-year in prison for document forgery.