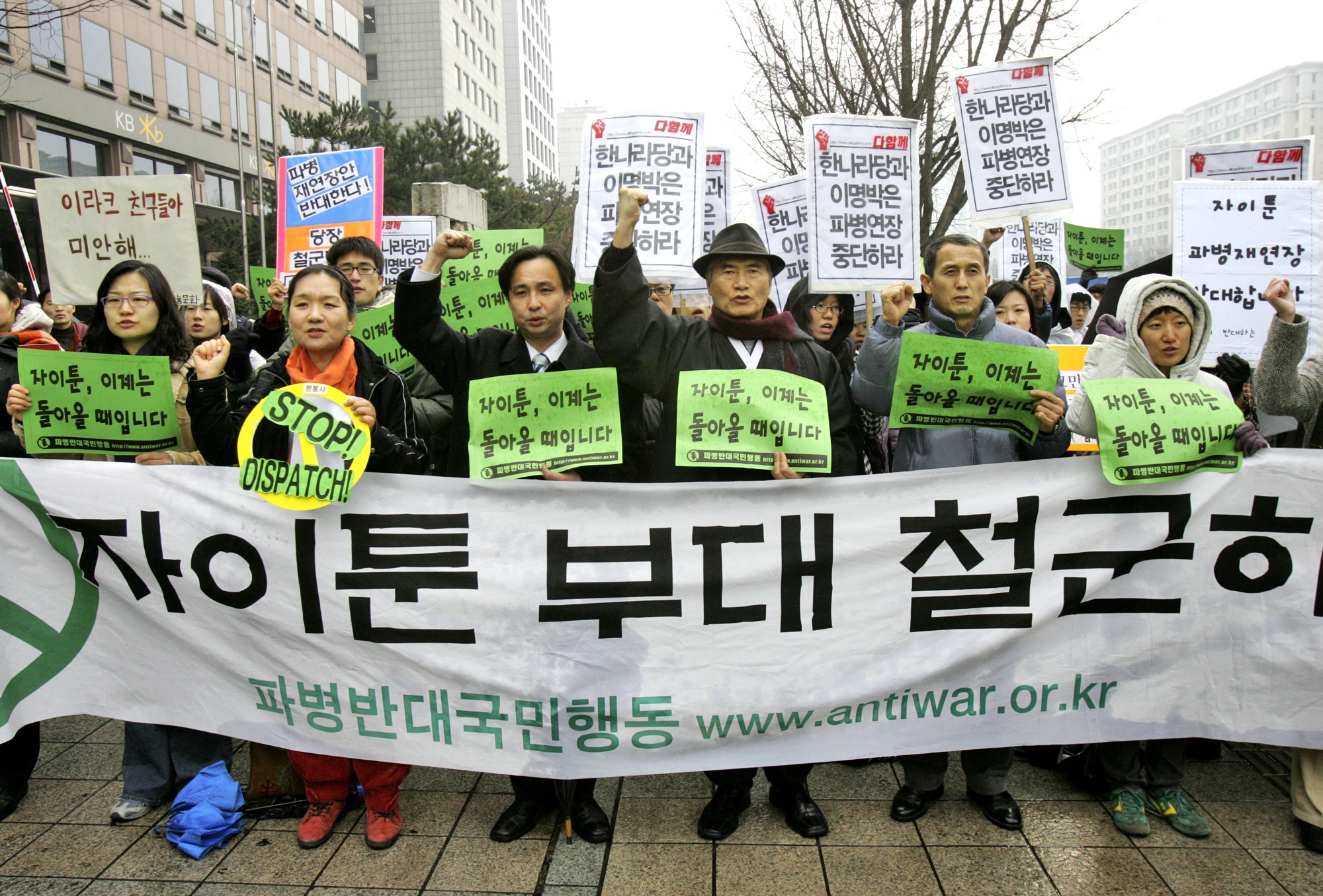 South Korea's parliament voted yesterday to extend the country's troop deployment in Iraq for another year, amid protests by activists opposed to the decision.
The 298-member National Assembly approved the extension of the country's deployment of 650 troops by a vote of 146-104. Six lawmakers abstained and 42 lawmakers did not show up for the vote.
South Korea's President Roh Moo-hyun announced the extension plan in October, saying it would solidify South Korea's alliance with the United States amid the North Korean nuclear standoff and boost economic interests in Iraq.
"We can't help paying attention to the North Korean nuclear issue," Hwang Jin-ha, a member of the conservative opposition Grand National Party, told parliament before the vote. He said closer cooperation with the U.S. is crucial as North Korea threatened to slow its disabling of nuclear facilities due to delayed aid.
South Korea has stationed troops in Iraq for a reconstruction mission since 2003 at the request of Washington, which has 28,000 troops based in South Korea as deterrent against North Korea. In September, U.S. President George W. Bush asked Roh to consider the extension at their summit meeting in Sydney, saying the South Korean contingent in Iraq has a high reputation for its expertise.
The South's troops level once stood at 3,600, making it the largest U.S. largest coalition partner after Britain. However, the Seoul government has gradually brought soldiers home due to anti-deployment sentiments that peaked when Islamic insurgents beheaded a South Korean civilian working in Iraq in 2004, amid militant demands for a troop withdrawal.
South Korea recently withdrew about 600 troops from Iraq, setting the current troop level at 650, according to the office of the Joint Chiefs of Staff in Seoul.
Liberal lawmakers criticized Roh - their former ideological ally who once pledged not to "kowtow" the U.S. - for taking part in an unjustified war.
"With endless guerrilla wars, Iraq is plunging into a swamp of war," said Lim Jong-seok, a member of the United New Democratic Party.
Earlier yesterday, dozens of anti-war activists staged a protest near the National Assembly in Seoul, calling on lawmakers to reject the deployment extension plan.
"Zaytun, it's time to return home!" shouted the activists, referring to the contingent's code name, the Arabic word for "olive." There were reports of clashes.
If parliament had rejected the extension proposal, all South Korean soldiers would have been obligated to return home, said parliamentary official Oh Byung-hyuck.
Earlier this month, South Korea brought home 195 army medics and engineers from Afghanistan, ending its five-year deployment to help rebuild the war-ravaged country also at Washington's request.
Seoul wrapped up the troop deployment by the end of this year as planned but earlier this year reconfirmed the pledge to the Taliban to win the freedom of 21 civilians kidnapped in July after the insurgents killed two hostages.