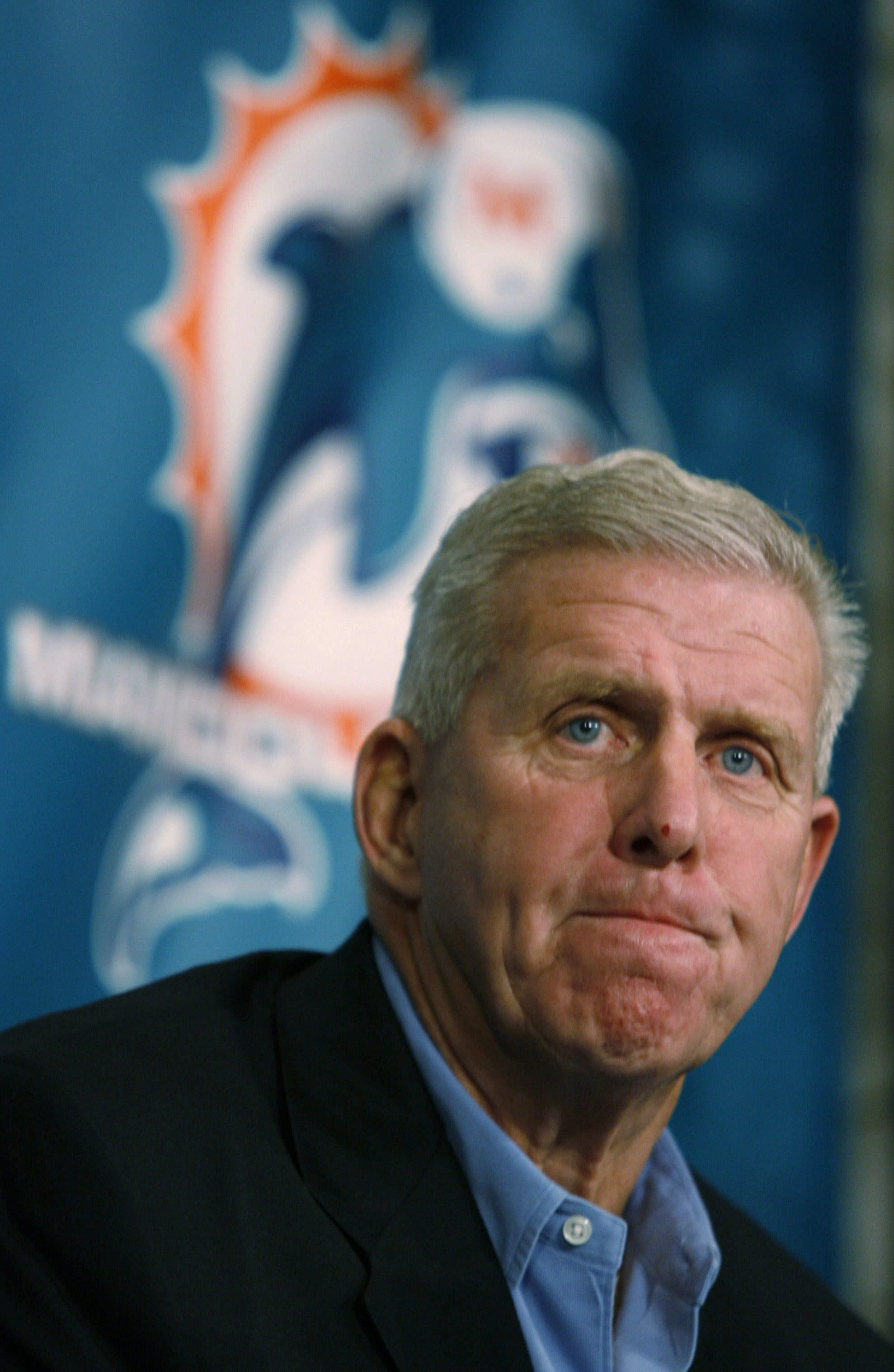 I missed the part where Bill Parcells promised to take the Dolphins back to the Super Bowl. And I don't think he announced an instant repair of all the mistakes that have set the Dolphins back for nearly a decade and turned the once-proud franchise into the NFL's worst team.
Thank goodness.
Parcells was introduced as the Dolphins' football czar Thursday. He can hire and fire anyone connected with the football side of the franchise practically at a whim. He can wield a hammer as heavy as Thor's.
And yet he treaded very lightly during his 27 minutes in the spotlight's glare.
He spoke in a soft voice that cracked at times and faded to a mumble near the back of the Dolphins' cavernous team meeting room. He had trouble hearing some of the questions and patiently and politely asked that the inquiries be repeated.
He even sort of took back his most famous line of all, the one in which he turned a coach's desire to pick his own players into a food recipe - "If you're going to cook the meal, you ought to be able to shop for the groceries.''
"I wish I had never said that,'' Parcells said almost apologetically. "That's not what I'm charged with doing here.''
It was a different view of a man who once called a reporter "a jerk'' during a news conference and challenged another by gruffly asking, "You trying to antagonize me?''
The Bill Parcells on display in his Dolphins debut lacked the theatrics of the man that brought two Super Bowl titles to Broadway when he led the Giants. And that, quite frankly, was refreshing.
The Dolphins have had too much introductory news conference drama in recent years backed by too little on-field performance.
Dolphins fans, you must remember, got their hopes up when Jimmy Johnson celebrated his first day on the job by talking openly of returning the franchise to a Super Bowl in three years. That was the same day he met with team staff, showed off one of his condo-sized Dallas championship rings and ordered, "Let's go win another one of these.''
That was 1996. And all those promises and prognostications, the encouragement and all that enthusiasm led to, well, nothing.
South Florida has also had its fill of first impressions like the one we got from Nick Saban. Remember he talked convincingly that first day on the job in 2005, saying he would put the Dolphins, "in a position to win a championship sometime in the future.''
He also talked of turning the Dolphins into a "dangerous team'' with players that could make "explosive plays.''
Well, that all blew up in our faces within two years.
So big talk rings hollow in these parts. Super Bowl promises are as worthless as promises to never become the coach at Alabama. Parcells thankfully avoided such bluster and bravado.
He said he has "no ambition'' to coach or be the general manager. And although he might eventually fire Cam Cameron or Randy Mueller or both, he showed restraint in discussing the issue, suggesting his decisions on both men will be well studied and carefully planned.
Parcells is a bright man, a gifted man, a football man. He can motivate even when he torments which is currency in the NFL. And he understands that Miami's broken franchise is chiefly the result of Miami's broken roster.
"I'm going to have a plan,'' he said. "If I can implement it and we are able to follow a course, I do think I know, basically, what to try to do. This is basically a talent-acquisition business ... In addition to acquiring the talent, you have to have a structure in place within your organization that will enhance the development of that talent. Then you have to have a confident coaching staff that will coach the talent.''
Parcells hopes to put those pieces together before his four-year contract expires or his restless soul turns his attention to other matters. He isn't relying on past accomplishments to gain future success. He isn't pitching a Super Bowl promise as if he were selling championships for a commission.
He took a subtle approach Thursday, one might argue he took a surprisingly reserved tact. Give the approach the benefit of the doubt for now.
Because, in recent times, the hard sell has only set the Dolphins on a course for a hard fall.