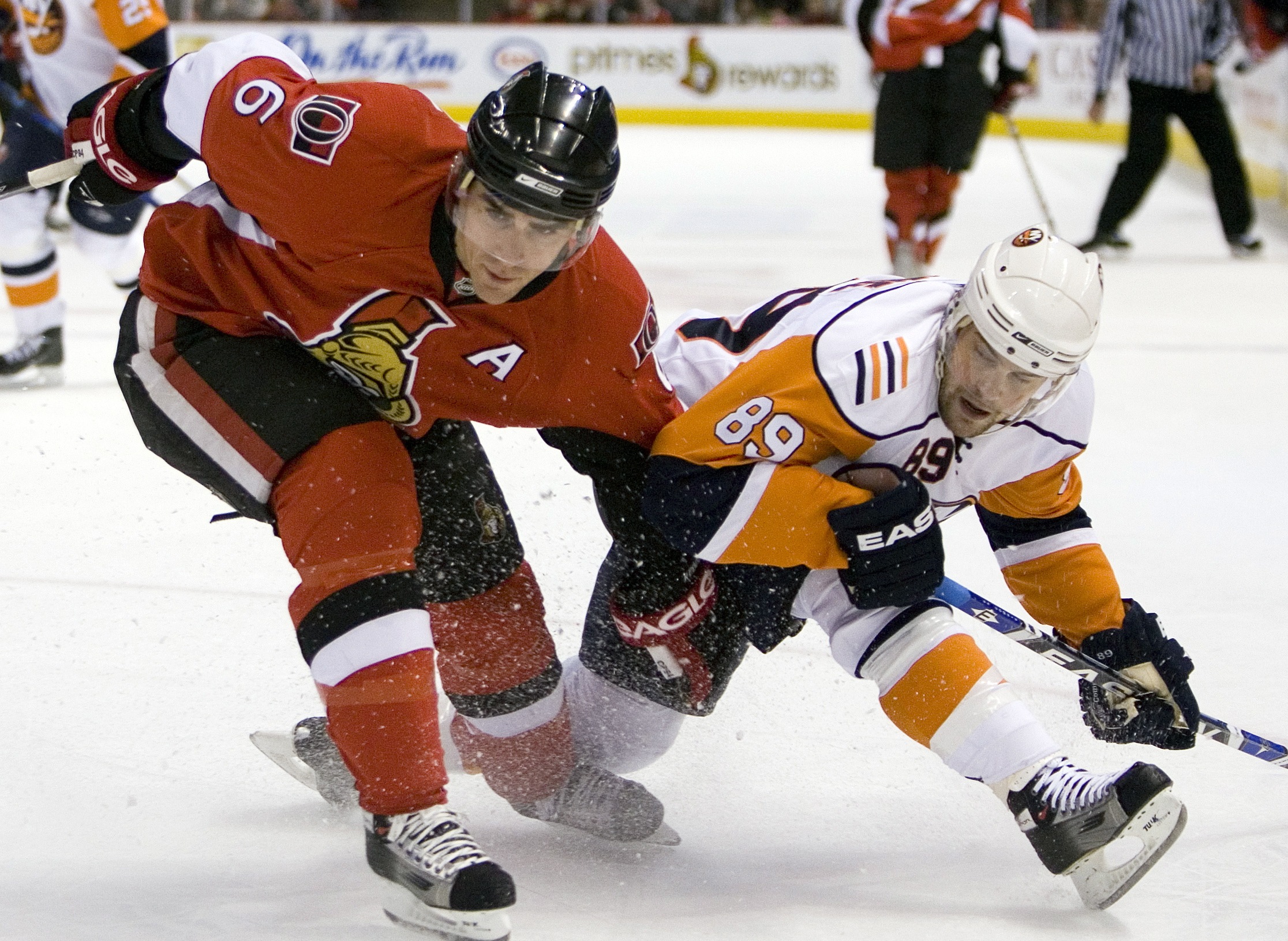 As Yogi Berra once said, it was deja vu all over again for the Islanders. Their last visit to Scotiabank Place last March 15 was a 5-2 loss that came in the first game after losing goaltender Rick DiPietro to a concussion in Montreal. Mike Dunham was the backup goaltender who got overrun by the best team in the Eastern Conference that night.
Wade c played Dunham's role as rabbit in a shooting gallery Thursday night with DiPietro home nursing a sprained left knee. The result was another 5-2 loss in which the Isles' defense broke down and the Senators smelled blood and went for the kill.
Dubielewicz stood up to a 9-0 barrage in shots against in the opening minutes and made several tough saves in a scoreless first period. But Sean Bergenheim took a penalty as the period ended, and Trent Hunter tripped Daniel Alfredsson 35 seconds into the second period to give the Senators a five-on-three power play.
Jason Spezza's tap-in of a Dany Heatley pass through the slot to the left post at 1:02 opened the floodgates. Isles defender Andy Sutton let a puck get past him in the neutral zone, and Spezza picked it up on the right wing and fed Alfredsson coming on the rush from the left side for a goal at 2:45.
"It was a tough break to take a penalty when we already had one," Dubielewicz said. "A tough team like that with a five-on-three, they're going to bury it. From that point, I felt we were kind of on our heels. The five-on-three pretty much killed us. `Hunts' makes a strong play and the guy falls down. It's a bad break."
The Isles then got their first power play of the game at 17:58, and it turned into a short-handed goal for the Senators when Chris Kelly got a breakaway and put a shot that bounced off the crossbar to Antoine Vermette for a shot over a sprawled Dubielewicz and a 3-0 lead just seven seconds before the period ended.
It was the Islanders' league-leading eighth short-handed goal against this season and their second in two nights. "It's very much a concern," coach Ted Nolan said. "We keep doing the same thing over and over again. If the power play isn't scoring goals, that's one thing, but if it's letting the other team score short-handed goals, that's unacceptable."
Captain Bill Guerin ended the shutout bid of Ottawa goaltender Martin Gerber at 8:13 of the third period by scoring on the Islanders' first shot of the period.
But the Senators' Nick Foligno batted a puck out of the air and into the net, and Mike Fisher scored another goal off the rush for a 5-1 margin before Guerin added his second goal and team-high 12th at 15:39.
"The game turned in the first two minutes of the second period," Guerin said. Referring to Spezza, Heatley and Alfredsson, he added, "They've got the best line in hockey. They dominate at five-on-five, never mind five-on-three. We put ourselves in penalty trouble, and it made a big difference. There's not much one guy can do when he's being thrown to the wolves."
Dubielewicz was making only his sixth appearance of the season and just his third start. He's lost all three starts by a combined total of 17-3 under some very difficult circumstances.
"We didn't play an intelligent game," defenseman Brendan Witt said. "When we beat them at home, we were disciplined. But we exposed ourselves tonight, and they took it to us. They scored three of five goals off the rush.
"Dubie's a good goalie. It seems like, when he's in, we really expose ourselves instead of just playing with confidence. But he proved last year he's an NHL goalie."