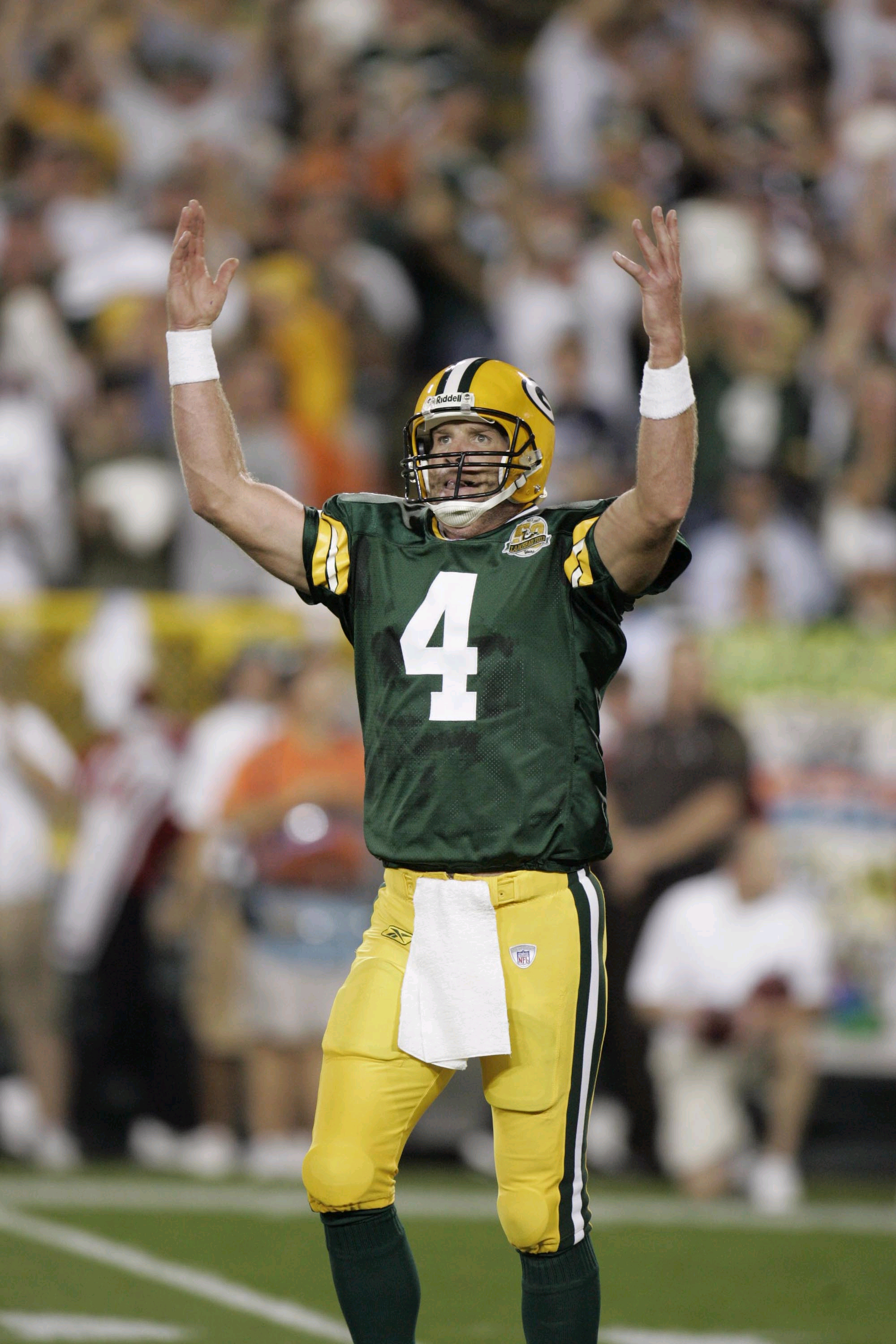 Sports stars, like fads, come and go.
And then there's Brett Favre.
For 16 seasons with the Green Bay Packers, Favre has endured and succeeded at football's most demanding position.
This season, Favre has set several all-time records in the National Football League: He has thrown more touchdown passes, thrown for more yards and has recorded more victories at quarterback than anyone else. And last week, he was selected for his ninth Pro Bowl.
But Favre has another record that few people know about, even though the evidence is everywhere. It can be found at Packers football games, home and away, in stores and on Christmas morning, under countless trees.
According to league officials, the No. 4 Favre jersey is the all-time best-selling jersey in the history of the game. More than Johnny Unitas, more than John Elway, more than Joe Montana. More than any of the other greats who played the game.
League officials, as well as representatives of the NFL players association, who track sales for royalty purposes, regard specific sales numbers as state secrets. But a league official confirmed that Favre's jersey is the No. 1-selling jersey of all time.
At the Packers Pro Shop at Lambeau Field, team officials say that dating back to April 2005, a relatively short time span, approximately 51,500 Favre jerseys have been sold at the store. And that's just at one location.
Not surprisingly, Favre's stellar performance this year has sparked even more sales nationwide, according to league officials and Reebok, the sole manufacturer of licensed NFL jerseys.
"Favre is the Pied Piper of licensed apparel," said Reebok's Eddie White.
White says Favre currently represents 3 percent of all NFL jerseys sold and ranks second behind Peyton Manning of the Indianapolis Colts in overall sales. Last year, he was responsible for 1.3 percent of all jerseys sold.
Overall, the Packers are eighth-best in terms of jerseys sold this year. But that's a huge jump from last year, when team jerseys sold ranked 13th in the league.
"Favre, of course, is first among all Packers with a whopping 64 percent of all Packer jerseys sold," said White.
Bob Harlan, the team's chairman who has been with Favre since he played his first game for the Packers in September 1992, says there are three reasons why the Favre jersey is the green and gold standard for Packers fans across the country.
"His longevity is a factor," Harlan said. "There is also his colorful personality. The fans are drawn to him because of the way he plays. And third, it's little Green Bay against the world. And Brett is our leader."
Harlan noted that the franchise has not changed the look of the Packers jerseys much in the years Favre has been with the team. Harlan said that during the Ron Wolf era there was talk of changing the appearance of the jersey, but the team stood pat.
"Thank heavens we didn't change," Harlan said.
Jim Tjader, a co-owner of the Fan Fair stores chain, said sales of Packers merchandise were brisk this season.
"Anything related to Brett Favre," Tjader said. "It's a national thing. There are a lot of displaced Packer fans."
Tjader said his company's store in Denver, for example, was asking for more Favre merchandise.
"Manufacturers are trying to keep up," he said.
At the Packers Pro Shop, Kate Hogan, director of retail sales, noticed this year that more women were buying Favre jerseys. This year's sales are running about 50-50, male and female, she said.
Harlan said the increase in sales among women is likely due to Favre's wife, Deanna. Ever since her battle with breast cancer, the sale of pink Favre jerseys have been a big success.
The sale of athletic jerseys and all sports-related apparel is big business in this country and Canada. Mike May, a spokesman for the Sporting Goods Manufacturers Association, said the NFL sold US$3.15 billion worth of licensed merchandise in 2005, the last year information was available.
"The NFL is leading the way on all sports licensed merchandise," May said.
Should the Packers make a long playoff run, there will be even more Favre jerseys around Wisconsin and the nation.
"The NFL is the king of the road in licensed sports merchandise," May said. "And the Packers are one of the league's sentimental teams. Even the people who have a Brett Favre jersey that they bought years ago are bringing it out of the closet now."