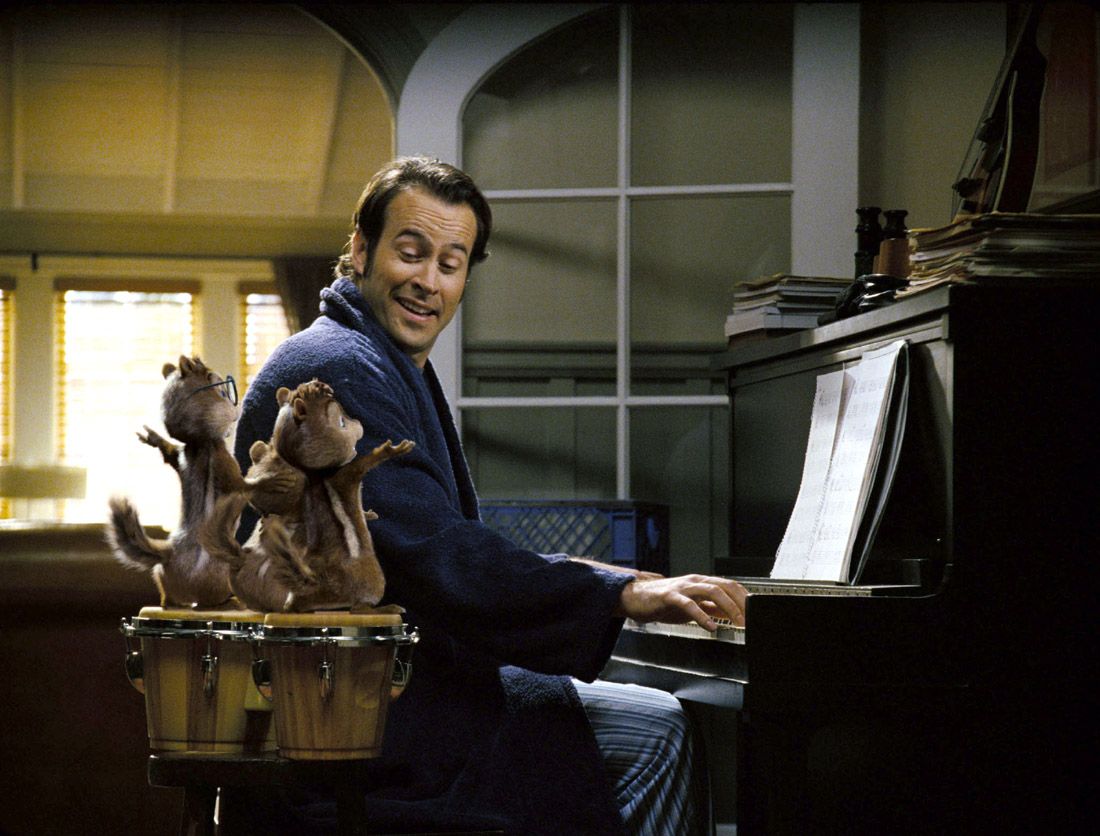 Alvin and the Chipmunks
鼠來寶
Directed by: Tim Hill
Starring: Jason Lee, David Cross and the voices of Justin Long, Matthew Gray Gubler and Jesse McCartney
Opens: Today, December 28
Come on, folks, don't say "Alvin and the Chipmunks" didn't warn you.
If you've managed to make it through the past 50 years without experiencing the peculiar helium twang of these relentlessly chipper animated rodents, then your American-kitsch quotient is teetering in the low teens. Reaction to the music of these singing critters over the years falls into roughly three camps: You think it's kind of cute; you wince but are able to handle "The Chipmunk Song (Christmas Don't Be Late)" four or five times without losing your sanity; or you would rather personally remove three sets of chipmunk vocal cords without anesthetic than listen to one more note.
The response to the new movie version of "Alvin and the Chipmunks," which remains faithful to the sound of the original characters invented by the late Ross Bagdasarian in the 1950s, likely will fall along similar lines.
Personally, I find myself in the middle camp. Even though I know that the Chipmunks - which sound like a cross between a CD playing on fast forward and an asphyxiating giraffe - should do bad things to my gastrointesintal system, I really don't mind them. They're cute. They're silly. Taken in small doses, their music is not tortuous, even though some people think it should be banned by the Geneva Conventions.
Yes, the movie is juvenile and occasionally stupid. What do you expect in a story about singing chipmunks?
When Alvin, Simon and little Theodore (voiced by Justin Long, Matthew Gray Gubler and Jesse McCartney) find themselves homeless after their tree in the forest is felled, they wind up pestering the heck out of a struggling Los Angeles musician named Dave Seville, played by Jason Lee. (This was the stage name of Bagdasarian, who recorded the original Chipmunks voices.) Dave discovers the critters can sing. Three stars are born.
Mercifully, director Tim Hill doesn't waste too much time milking laughs out of the fact that Dave can talk to the chipmunks but no one else can. Soon they're out in the world making headlines at album-release parties and 15,000-seat arenas.
Why does the movie (sort of) work? Certainly not because of Lee, who is about as believable playing opposite empty space as a propped-up piece of cardboard. (The chipmunks were added later through the magic of computer animation, of course.) If Lee gesticulated any more fiercely while interacting with his imaginary co-stars, he'd sprain something. And much of the Chipmunks music itself is forgettable, except for that line about Hula-Hoops, alas, which will stay with you whether you want it to or not.
But there's something endearing at work here.
The level of humor is aimed solidly at the under-10 demographic, complete with poop jokes, dorky one-liners and domestic mayhem. (What kid wouldn't love to tear apart his kitchen?) Hill realizes that this is his audience, and he plays squarely to it. The film remains solidly pre-teen and proudly so. Although the Chipmunks sing a few hip-hop songs and experience the "fast lane" under the tutelage of a sleazy record exec (David Cross), the three cuddly characters remain young at heart.
Which, after all, isn't bad after a 50-year career.