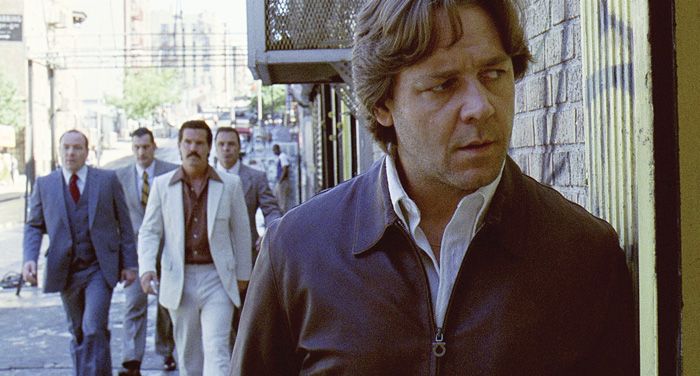 American Gangster
美國黑幫
Directed by: Ridley Scott
Starring: Denzel Washington, Russell Crowe, Ruby Dee, Lymari Nadal, Chiwetel Ejiofor, Cuba Gooding Jr. and Josh Brolin
Opens: Today, December 28
"American Gangster" is 2-1/2 hours of pleasure with a guilty aftertaste. It takes the length of this engrossing picture to fathom how much it has glorified the drug dealer and killer played by Denzel Washington.
It starts with the casting of Washington as Frank Lucas, the real-life drug kingpin who ruled Harlem in the early 1970s. Washington brings a moral authority to whomever he plays, even a criminal.
And "American Gangster" doesn't even portray Frank as that bad of a guy. Rather, he emerges as a savvy entrepreneur who, along with reinventing the drug trade, gave back to his community and bought a fabulous house for his mother (Ruby Dee).
Somewhere in the film lies a commentary on the elusiveness of the American dream for African Americans of Lucas' era. But it's buried beneath the filmmakers' obvious admiration for Frank's acumen, charm and distinction as a comparatively class act in a world of scumbags.
Director Ridley Scott brings a brisk pace to the picture that keeps things lively and lends special emphasis to those moments when things do slow down. Like when Frank, on the day of his mentor's funeral, notices that a rival set down his drink on a nice wooden table. Frank very pointedly offers a coaster.
It's an act of hostility cloaked in civility - an act that only Washington, equal parts menacing criminal and disapproving high school principal, can pull off. Whether via gunplay or a stern look, Frank maintains control of nearly every situation, and Washington maintains control of every scene he's in - even those in which the formidable Russell Crowe appears.
These scenes are few, by the way. Crowe's character, New Jersey cop Richie Roberts (also based on a real guy), gets his own trajectory, battling crooked fellow cops while seeking big fish in the drug-trafficking trade. But even though Crowe and Washington's screen time together is limited, just seeing two of today's finest actors in the same film offers fascinating opportunities for comparison.
Like Washington, Crowe commands the camera's attention and radiates intelligence. And his performance contains more nuance than Washington's simply because Richie is a more complex character. But Washington remains the more powerful presence - which makes sense, since he's nearly a decade older than Crowe.
Frank and Richie's parallel and then converging story lines hold interest partly because Scott lends such authenticity to the period setting. The clothes and cars and attitudes seem organic to the times, with cops and hoods alike outfitted in leather jackets and probably, if you get close enough, smelling of Hai Karate.
Richie angers fellow officers when he finds a million dollars in a car trunk and actually turns the money in. Ostracized by the dirty cops, he accepts an offer to head a special drug task force composed of officers he gets to hand pick. His investigation takes him into New York City, where he bumps heads with a band of very dirty cops headed by Trupo (Josh Brolin), the sleaziest law enforcer in the Tri-State area.
Richie gets wind of a new brand of heroin that's cheaper and purer than what the Mafia is peddling. That's because Frank went to the source in Southeast Asia himself, thereby eliminating middlemen.
Steven Zaillian's script (from a New York Magazine article by Mark Jacobson) contrasts cop and criminal in interesting ways. Richie is a womanizer and inattentive father whose saving grace is his professional honesty. Frank, on the other hand, holds things together quite well in his criminal and personal lives until his affection for the one-time Miss Puerto Rico (Lymari Nadal) leads to an action that seems out of character and proves to be a mistake.
Nadal doesn't make much of an impact, thus robbing this second scenario of some of its credibility. Then again, it's hard to make an impression in a Washington-Crowe film unless you're Washington or Crowe. Or Ruby Dee, who delivers a moment that brings the phrase "supporting actress nomination" immediately to mind.
Though it rivets throughout, "American Gangster" doesn't resolve itself in a satisfactory way. Frank's homicidal temper gets explored mostly in sensationalistic fashion, and the deadly effect his pure heroin must have had on New York City's addicts is barely touched upon. Worse yet, the film's final minutes and post-script introduce aspects of the case that are so interesting and surprising that you wonder why they weren't explored earlier or more fully.