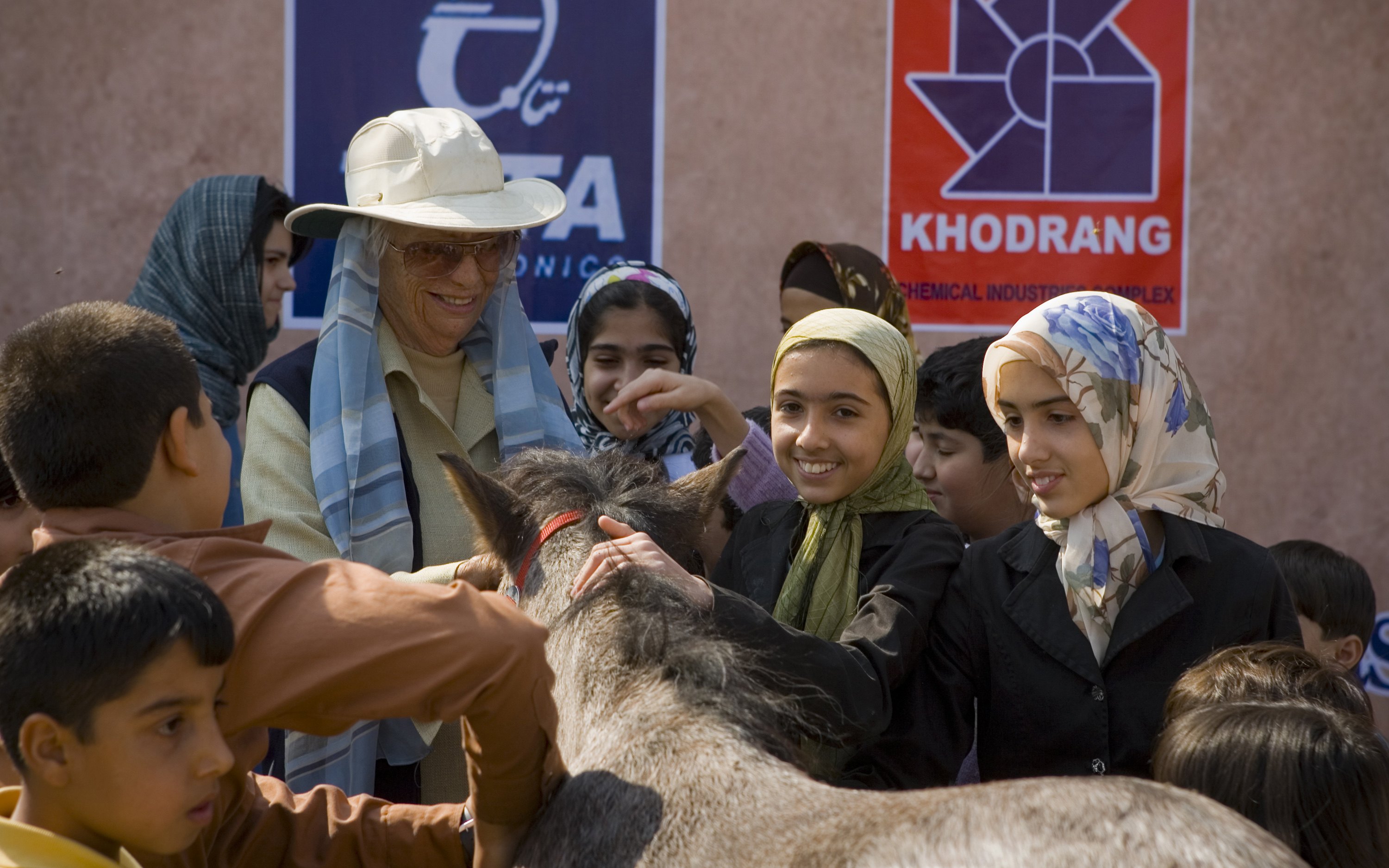 American Louise Firouz made Iran her home half a century ago. Now 75, she runs a stud farm in the remote northeast and has watched the turbulent transformation of her adopted country from U.S.-ally to arch foe.
She moved to Tehran in the 1950s to marry a young Iranian aristocrat, but the family's privileged existence changed dramatically with Iran's 1979 Islamic revolution followed by the deprivations of its 8-year war with neighboring Iraq.
Firouz faced financial hardship and even spent time in jail, but won fame in the equestrian world for her work in rescuing an ancient breed from extinction and setting out to show its link to the thoroughbreds seen on Western race courses.
She has watched Iran go from a U.S.-allied monarchy to an Islamic state that denounces America as the "Great Satan."
"I've been down, and up again, several times," Firouz said, sitting by an open fire in her simple brick house where she now lives alone. As she reminisced, darkness fell on the vast steppe outside, where wolves roam.
One of few Americans still in Iran, the outspoken woman is no friend of U.S. policy in the Middle East and says any attack over Tehran's disputed nuclear program would be disastrous for the region.
Her Western friends may think she is crazy to live in the middle of nowhere in a country bitterly opposed to the United States, but Firouz says she has no regrets about coming to Iran and would not leave voluntarily.
"I stopped thinking of myself as an American a long time ago," she said. "I'd be much more afraid living alone like this in America. I miss a lot of people but I don't miss their lifestyle."
Boasting a treasure trove of memories, she entertains guests with stories from a rich and varied life.
With her striking blue eyes and quick wit, Firouz chuckles as she recalls how she had to abandon her car - and later present the keys to her husband - when bullets flew outside the U.S. embassy in Tehran shortly before the 1979 hostage-taking that still sours relations between the two foes.
Then there was the Iraqi missile engine that crashed through the roof of the family's house in the capital during the 1980-88 Iran-Iraq war, the warhead exploding nearby.
"They were rough times ... bombs came down all over the place," Firouz said.
From her pre-revolution days, she brings to life the prominent guests she and her husband knew and used to entertain - including Western envoys, authors and explorers.
But all that came to a sudden end when the U.S.-backed shah, Mohammed Reza Pahlavi, was toppled in the revolution almost three decades ago.
Viewed suspiciously by Iran's new Islamic rulers because of the name of their family, descendants of Iran's royal Qajar dynasty who ruled before the Pahlavis, she was imprisoned for three weeks while her husband Narcy was jailed for three months.
Narcy's brother was sentenced to death but ended up serving six years in jail. Some relatives saw their property confiscated and fled Iran. Other people they knew were executed.
Firouz, who raised three children including a son who is now Reuters' chief photographer in Iran, said she was forced to sell her jewelry and silver to stay afloat.
"We had nothing. We really did not have much to eat in those days. We were hungry all the time," she said.
But, she added with a laugh, "it makes you young. How many people do you know who managed to live two lifetimes in one?"
The family gradually rebuilt their life and set up the farm, near an ethnic Turkmen village, where she now lives.
A widow since 1994, her closest daily companions are her five dogs, 45 horses and the Turkmen villagers working on her farm, which struggles financially.
To make ends meet, she takes groups of thrill-seeking Western tourists on 10-day riding treks in the distant mountains, even though a broken arm slows her down somewhat.
Her doctor told her she was too old to ride, but she retorted: "I'm not too old to ride. I'm too old to fall off."
Born on a farm in Virginia, she took her passion for horses with her to Iran where she established a riding school, helped save the native Caspian breed and now rears Turkoman horses.
She has pleaded in vain with the authorities to be allowed to start exporting them, arguing they would help inject new vigor into Western horses which she says have become flawed.
"Horses like these would do very well in the West," she said proudly stroking a brown stallion in the paddock.
British travel writer Jason Elliot describes in his book "Mirrors of the Unseen - Journeys in Iran" how her 1965 encounter with some of the few remaining Caspian horses during a mountain expedition sent "tremors through equine gospel."
Firouz was not first with the idea that the diminutive breed was an ancestor to the prized Arab but she was the first "stubborn enough" to prove it, he wrote.
"This did not all go down well in orthodox equestrian circles," he added. "Western equine history, hypnotized by the beauty of the Arab, tended to come to a halt at the Euphrates."
Her comfortable but simple home filled with books, Persian rugs and drawings of horses, Firouz says she learnt early on not to care too much about personal possessions.
She decided to leave the United States when companies tried to lure her and other students with generous pension schemes: "I was appalled. Now of course I don't have a retirement plan but I've had a very good time."