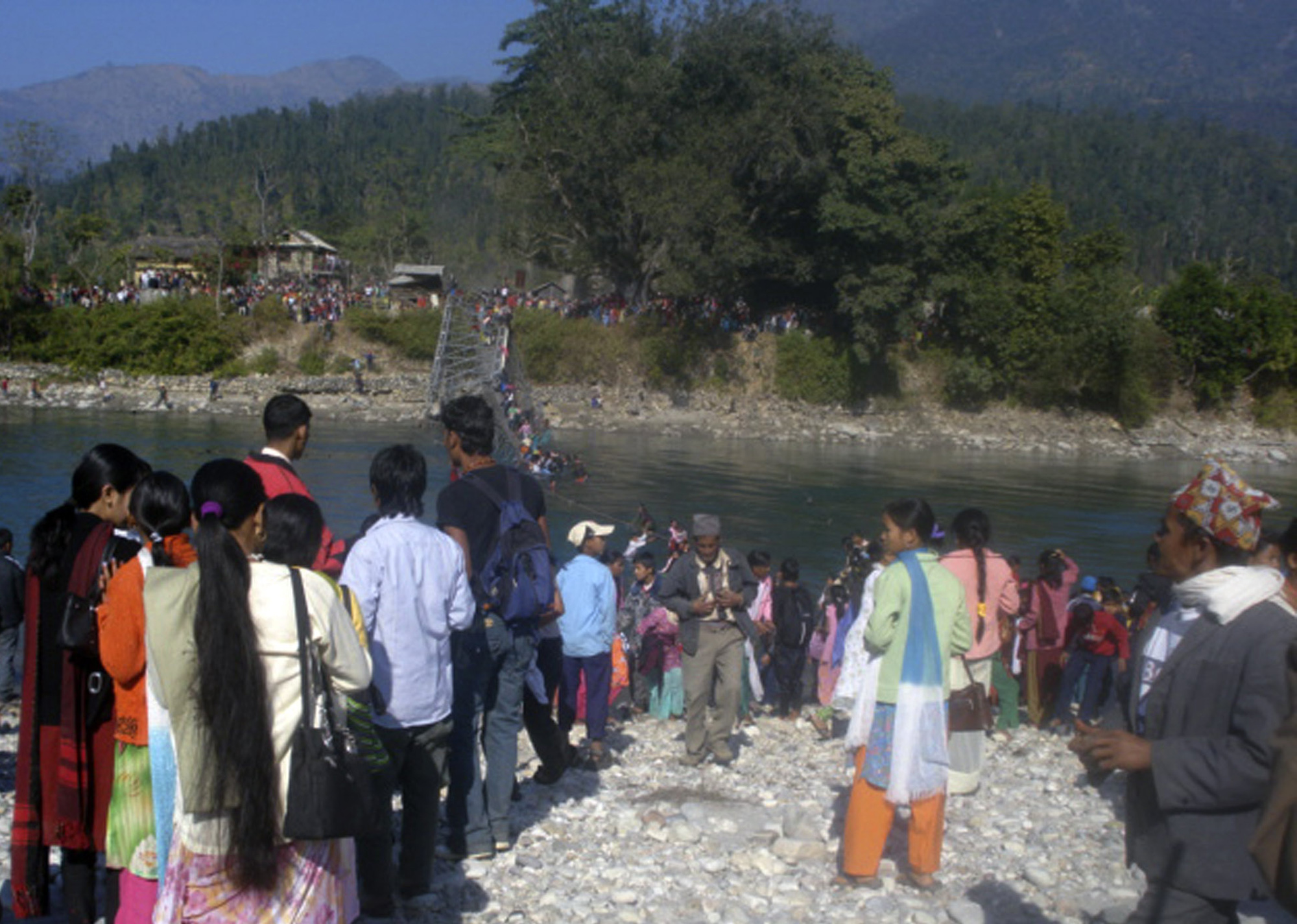 Troops joined police searching yesterday for hundreds of people missing a day after a bridge collapsed killing 16 and injuring 40 more in a steep river gorge in Nepal, officials said.
Nearly 400 people were on the bridge over the Bheri river, 380 kilometers west of the capital Katmandu, when disaster struck on Tuesday afternoon, witnesses said.
Police said 35 had been officially reported as missing by relatives early yesterday and the number was expected to rise.
"The rescue operations began early Wednesday morning. Around 450 police and soldiers have been deployed to scour the river banks from three locations," district administrator Anil Kumar Pandey told Agence France-Presse by phone.
The 500-meter bridge, only a year old and made of metal and steel coils, plunged into the gorge after a catastrophic failure of one of the supporting pillars that rose 50 meters above the water level, officials said.
Despite the search efforts, including two helicopters that were scouring the river, hopes of finding people still alive appeared remote.
"The chances of finding survivors look slim," Pandey said.
Deputy superintendent of police Bahadur Jung Malla, who was involved in the rescue operations, told Agence France-Presse that police and army teams were combing the river banks up to 40 kilometers downstream.
"It appears that mostly women and children are the ones who have gone missing," he said.
"It's a huge tragedy. Relatives are coming to us to report about their missing kin," Malla added.
Nar Bahadur Bika, a resident of a nearby village who was on the edge of the bridge on Tuesday when the accident occurred, said the span was so packed "there was hardly any space to move."
"The bridge was swaying and all of a sudden I heard a cracking sound," Bika told AFP from a hospital where two relatives injured in the collapse were recovering.
Bika said he jumped into the river to save himself after he saw one of the supporting pillars coming down.
"I managed to pull 10 people safely from the river," said the 19-year-old.
The bridge was crowded with locals who were heading to a religious ceremony to celebrate the full moon that began on Monday.
The site where the bridge fell into the river is estimated to be around 25 meters deep, the police official said.
Officials fear many people may have been swept downstream into remote areas of the mainly agricultural countryside that surrounds the Bheri, one of Nepal's largest rivers.
But as many as 100 people reportedly managed to swim to safety with the river at low winter season flow.