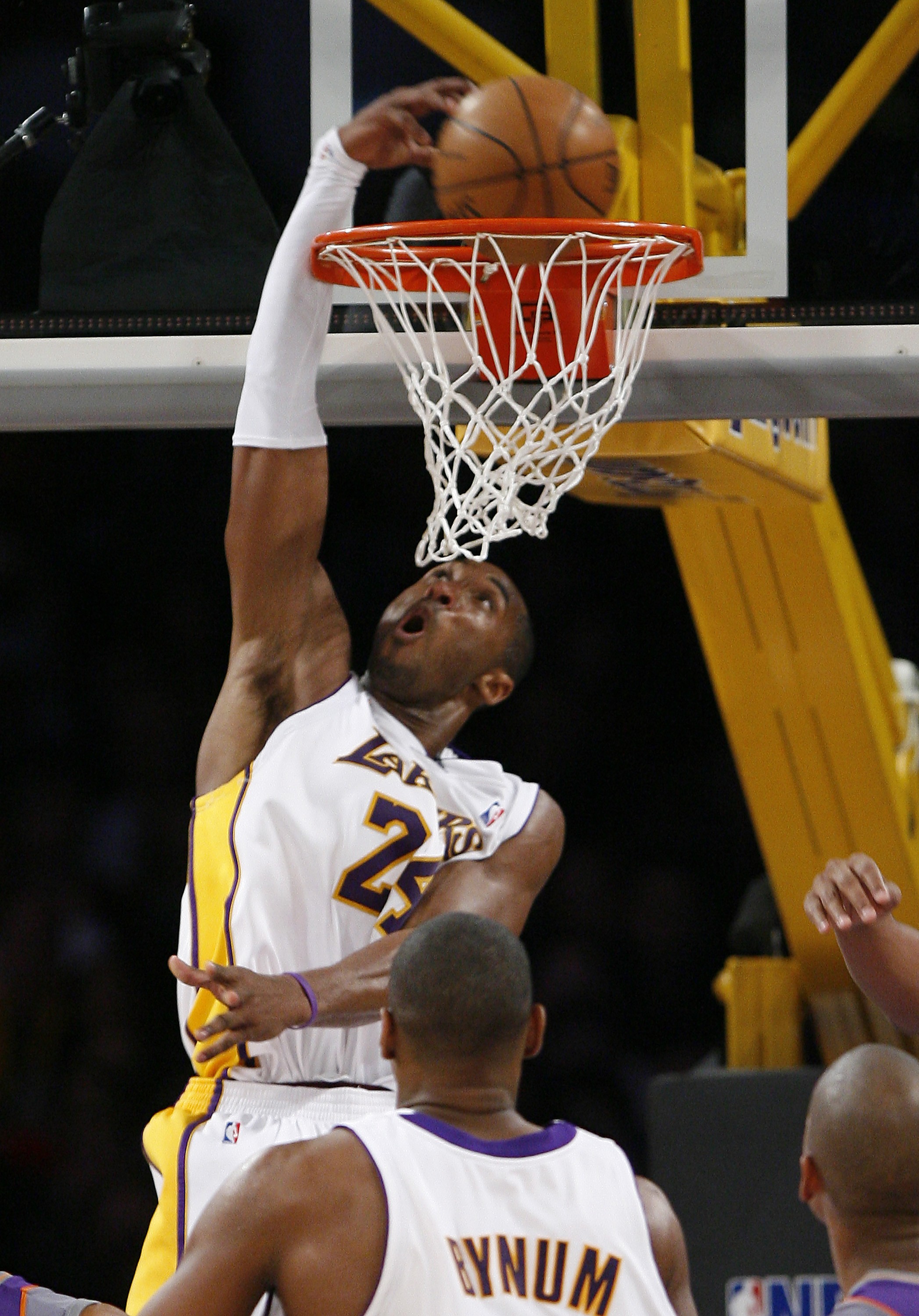 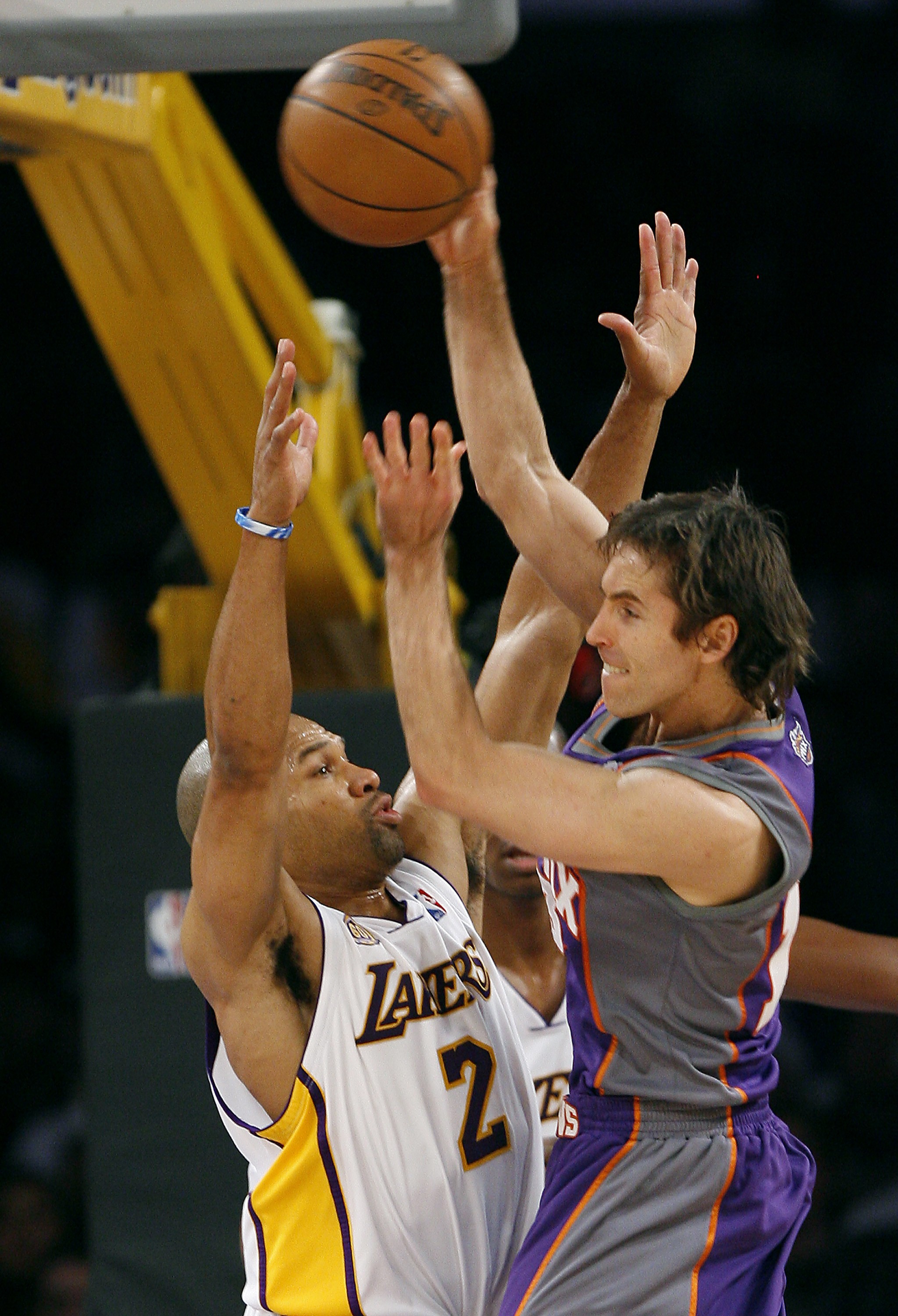 The Lakers reached yet another happy high Tuesday by shooting down the Phoenix Suns, 122-115, at Staples Center.
Andrew Bynum had a career-high 28 points, and Kobe Bryant had 38 points to displace Shaquille O'Neal as the league's all-time leading scorer on Christmas Day and ascend to the top 30 in NBA scoring history.
The Lakers, with this second victory in two tries over Phoenix, the team that eliminated them from the past two playoffs, have roared from a record of 9-8 to 18-10. This leaves them just one game behind the Suns in the Pacific Division with more than one-third of the regular season played.
"I put all the hard work in," Bynum said, "just for this."
The thing about the high life is it can be momentary, as Suns coach Mike D'Antoni made clear afterward could be the case for the Lakers - or there can be much, much more.
As exciting as the latter might be, the former is why Lakers coach Phil Jackson sarcastically said of Bynum afterward: "At the end of the year, if he is the MVP, then we'll say what a great year he's had."
That's also why Bryant apologized to reporters afterward for channeling bland-quote football coach Bill Belichick for stressing the need take it a day at a time and put in more work.
And when asked what these unprecedented results should do for Bynum, Bryant responded: "Work that much harder."
D'Antoni peppered his postgame comments with phrases such as the Lakers won "today" and Bynum was great "today" and summed up his very wary Christmas with: "If it was a playoff game, it'd bother me. It's one of 82."
This, however, is the kind of solid game the Lakers have been putting out there every time: all-around offensive potency and far more unity on defense than was seen in their teams that lost the past three Christmases to Miami.
Bryant can always assert himself, as he did Tuesday with six consecutive fourth-quarter points. The last gave the Lakers a 102-95 lead and came on a fading jumper over Shawn Marion after a cagey reverse-pivot.
But the Lakers can win in ways other than Bryant's dead lift. After his hot stretch in this game, Bryant missed a jumper the next time down and charged over Steve Nash after that.
"Run your offense!" Jackson hollered out from the bench, specifically toward Lamar Odom.
The Lakers' next possession? Jordan Farmar looked not for Bryant but for Bynum on a standard play that has Bynum roll to the hoop when the opposing big man shows too hard on a high screen. Bynum dramatically dunked Farmar's alley-oop pass.
Bynum scored on the next possession, too, getting a tip-in when he was left alone because Odom aggressively drew Phoenix's defenders at the basket. Odom (15 points, 14 rebounds), Derek Fisher (19 points, six assists, no turnovers) and Trevor Ariza (14 points, seven rebounds) made plays when Bryant and Bynum did not.
But Bryant and Bynum usually were. Bynum had far more impact than Suns All-Star center Amare Stoudemire (19 points, six rebounds), who logged 71/2 fewer minutes than Bynum.
In the latest demonstration of his improved stamina, Bynum tied his season high with 42 minutes and took particular satisfaction in his effort because, he said, "Let's face it, they're our rivals."
Rivalry revenge
Both Lakers captains agreed with D'Antoni that the Lakers didn't prove anything with this victory over Phoenix.
Bryant: "For us, it's just one game." Fisher: "Until we can go deep into the playoffs like they have, I don't think we're closing the gap."
After D'Antoni got annoyed on Nov. 2 when Jackson called a late timeout in the Lakers' landslide victory, D'Antoni called two 20-second timeouts in the final 25 seconds Tuesday with the Suns down by eight and nine points.
At the second one, Jackson took the opportunity to take Bynum out of the game and give him a Staples curtain call.
True competitor
The Lakers hope Kwame Brown (knee) plays Friday night to help defend Utah's Carlos Boozer. Luke Walton (ankle) missed his second consecutive game.
Asked if Bynum's growth could render it "ludicrous" that the Lakers entertained the idea of trading him for Jason Kidd last season, Jackson said:
"Jason Kidd is a guy who is an MVP player; he's a competitor to the gills. So with anybody who is a competitor to that level, there's nothing that's ludicrous about it."