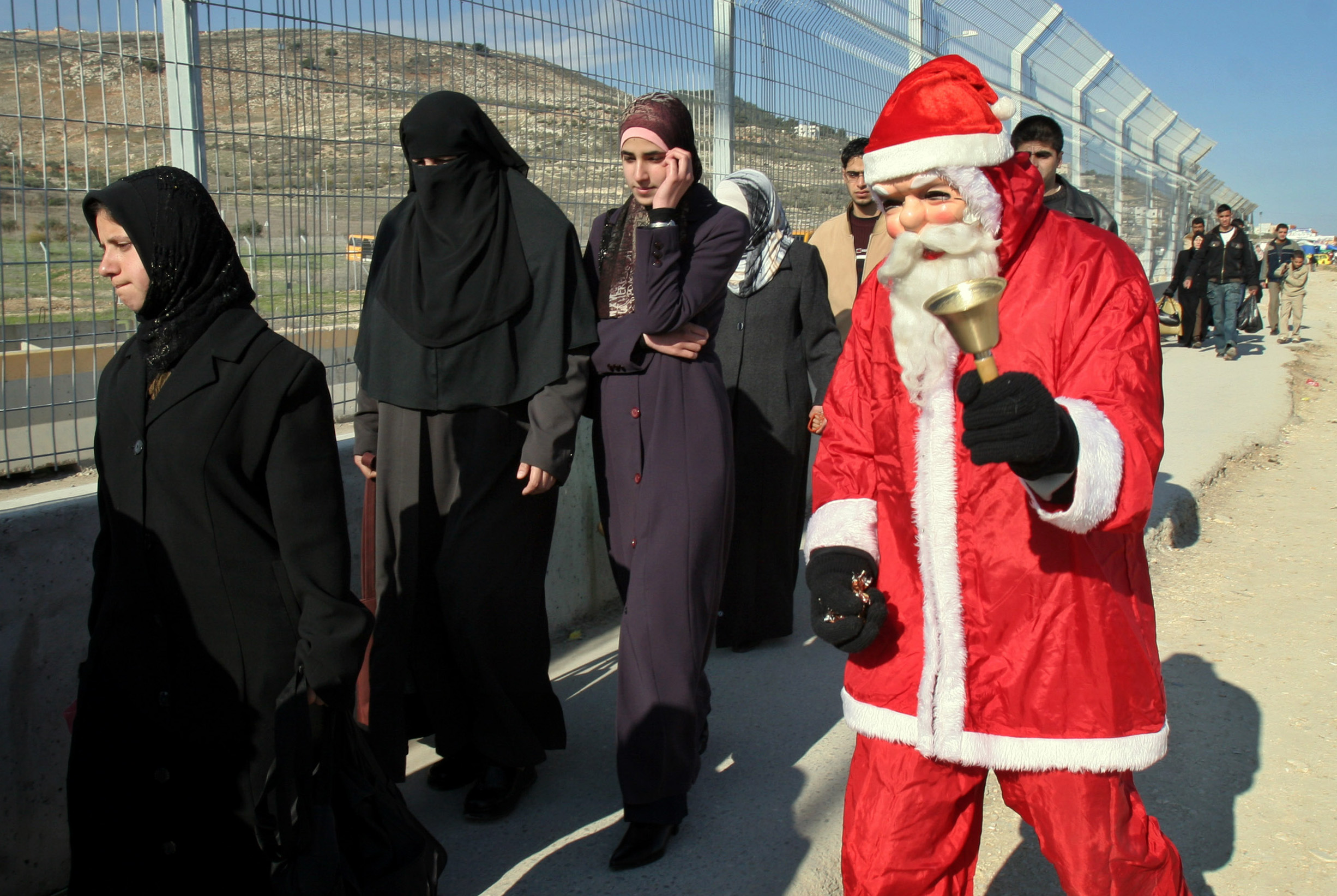 It's been a long time since anyone strung up Christmas lights in Nablus, especially beyond the confines of their own living room.
But this Christmas, for the first time in years, Christians here decked out their churches and community buildings in bright holiday lights. They are even sending sidewalk Santa Clauses out in the evenings, to ring the bells and give out chocolates to passersby.
Nablus's ancient Christian community has been dwindling for decades - from about 3,000 in the 1960s to a mere 700 now - and those who remain had all but gone underground in recent years, in the face of increasing violence and ascendant fundamentalists.
But this is changing with the new security campaign by forces loyal to Palestinian President Mahmoud Abbas. The initiative included the deployment last month of several hundred officers to Nablus to crack down on militias.
The improved security means that this season, Christians here are feeling safer than they have been in years.
Hard times
The recent dark years - the intifada violence, halting of the Israel-Palestinian peace process, followed by the landslide election of the Islamist Hamas - have made life difficult for the community here. Four churches were firebombed 16 months ago following comments made by the pope about the Prophet Mohammed.
But since the new security campaign with its no-tolerance approach to lawlessness, gunmen - whether affiliated with Hamas or rival militants in the PLO-affiliated al-Aqsa Brigades - are no longer allowed to roam the streets masked and armed. Many have been arrested.
New advertisements
Ubiquitous billboards advertising equipment and clothing from a paramilitary outfitter have been replaced with ads for Snickers and Sprite.
"We want to show that we exist, that we're here and we can show ourselves again," says Fadwa Khoury, a lifelong Nablus resident who came to attend Sunday morning services at the Greek Orthodox church, representing about half of the city's Christians. The others are Roman Catholic or Anglican.
"We became weak during the intifada. There was no government, and the street was ruled by rascals. There were guns everywhere and fear overrode our life, so we hid," says the mother of four, who, with her uncovered hair and face, stands out from the average woman in Nablus .
During the second intifada, which broke out in September 2000, it was considered inappropriate to hold celebrations that might be construed as lavish. Christians hunkered down even further when Hamas was elected by a large majority two years ago amid fears that the party would try to Islamicize Palestinian society.
"Hamas kept telling their followers to support their Muslim brothers, but not your Christian sisters, and not emphasizing that we are all Palestinians," says Khoury.
Since July, Hamas has gone underground. But Christians say they still feel marginalized and discriminated against. All four of Khoury's adult children have left Nablus - one is in Pennsylvania while the other three went south to Ramallah and Bethlehem, with their larger Christian populations.
The community's fears reached a height in September last year, when Pope Benedict XVI made comments that were taken by many Muslims as an insult to Islam. Four churches in Nablus were attacked by masked men wielding guns, firebombs, and lighter fluid. A group calling themselves the Swords of Islamic Right threatened to blow up all churches and Christian institutions in the Gaza Strip. One Christian man was killed there this fall, apparently accused of doing missionary work.
Positive impact
Father George, the head of the Greek Orthodox church, which was firebombed, says that he was encouraged by the fact that mainstream Muslims condemned the attacks.
"We were very careful that it should not escalate, because it would put down the roots for a Muslim-Christian conflict," says Father George, in an interview following his Sunday service. "The senior Muslim figures came to us and apologized and this made us feel better."
In the Bethlehem area, which has the largest Christian population of all Palestinian cities, Christians say that the increased security is having a positive impact on all Palestinians.
Sami Awad, director of the Holy Land Trust in Bethlehem, says that when the situation in the Palestinian territories verged on anarchy, Christians often felt the bite because it meant an increase of crime and extortion.
"What people have been interested in seeking, both Christians and Muslims, is a sense of the rule of law and to stop those who violate it," says Awad. "I know many Muslims who felt scared, too, who were also having difficulty with criminals targeting them. Now, the government making a very tough stand with militant groups who carry guns in the streets. This was a very prominent scene, and Christians and Muslims suffered from it. Now this is illegal and the government has taken some real steps to stop it."
Israeli officials concur that the situation in the West Bank has improved. "We see a positive change in the West Bank, and of the ability of the security forces to take control, and this by itself is very good," a senior Israeli official said in a briefing last week.
In the Rafidiyeh neighborhood of Nablus, once a primarily Christian village, Michael Saadeh watches his children's faces light up as he lights the tree. The house is decked in red and green and Santa all over. But their decorations, like most individual families, stay inside. There is undoubtedly more cheer in the air this year, but there is also a certain hesitancy.
"If they are going to act in the West Bank the way they did in Gaza," says Awad, a church official, "then we are going to worry."