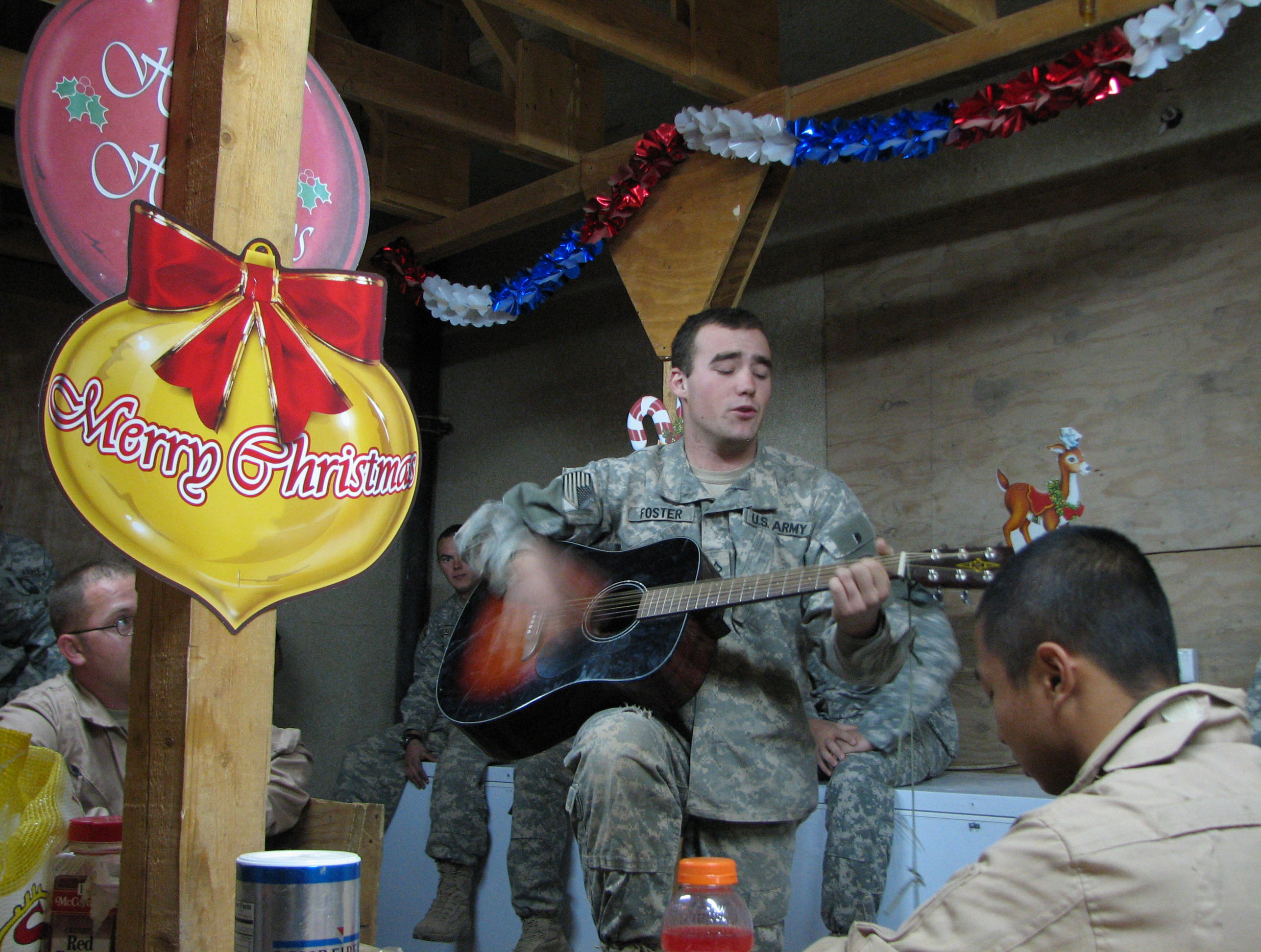 In a war zone, Christmas sometimes is as much about compromise as it is about celebration.
Yousif Akhsho Youmara, who owns an auto-body repair shop in Baghdad, remembers the glorious Christmases of his youth, when family members would stay the night and Muslim and Christian guests would drop by for days.
"Life used to be more cheerful. Not like now," he recalled.
Still, Christmas this year will be better than it was last year, when Youmara was too frightened to decorate or attend church services. Tuesday, he plans to take his wife and three children to a small neighborhood church and have some family and friends over. They have new clothes, freshly baked klaich - a rosewater-and-date pastry - and a decorated tree.
It's modest, but an improvement. "We started not to pay the same attention to Christmas," Youmara said. "We started to feel shame for celebrating while neighbors and relatives were sad for losing their young men."
At Patrol Base Warrior Keep in southwest Baghdad, all wish they were home. But at least there won't be any patrols outside the base for the Fort Campbell, Kentucky.-based 101st Airborne Division, 1st Battalion, 187th regiment, which arrived in Iraq in October: Lieutenant Colonel RJ Lillibridge, of Clarksville, Tennessee, didn't want to risk having to deliver bad news to families on the holiday.
So instead of patrolling, the soldiers are staying on base, playing Halo video game tournaments, waiting in lines for phones and computers to contact home and sleeping in past breakfast or even lunch.
Around 11 a.m. on Christmas Eve, a four-piece brass band showed up for a holiday concert. When the music roused the sleeping soldiers, the band moved upstairs to entertain the six-member roof guard and let the others rest.
Iraqi Christians and U.S. soldiers will celebrate Christmas in similar ways: with specially prepared meals, small church services and thoughts of family and friends far away. In this war-torn country, neither the Iraqis nor the U.S. soldiers are celebrating the way they really want to.
Violence is way down from last Christmas. But there's hardly a sense of joy. Too many people are missing.
Iraq once was home to about 800,000 Christians - about 3 percent of the population - but many now have fled to other countries. The Christian archbishop of Basra urged his followers in the southern city to pray on Christmas this year but to avoid other celebrations to protest the killings of a Christian brother and sister.
At the historic Church of the Virgin Mary in the relatively safe, religiously mixed Baghdad neighborhood of Karrada, leaders expected fewer than half of the 700 people who used to attend Christmas services.
"The church used to be full," said Father Butrus, the church leader. "We used to put loudspeakers near the gate because the main hall couldn't hold all of them. This year, we decided not even to bring a Christmas tree because of the security situation."
At Patrol Base Warrior, Staff Sergeant Barry Brennan's present came on Christmas Eve morning: His wife, Staff Sergeant Josie Brennan, arrived on a Blackhawk helicopter. Their superiors flew her in, saying there was no reason the couple shouldn't be together when Josie Brennan worked at nearby Camp Mahmudiyah. The Brennans exchanged gifts and ate together.
Their children, three boys ages 8, 7 and 2, are back home, living with grandparents. Last year, the family was together in Colorado, building snowmen and playing with toys on Christmas.
"I just keep saying, 'They're OK, they're OK,'" Josie Brennan said. "It's stuff you don't want to think about."
Even those who comfort the loneliest soldiers feel the pain of Christmas missed. Chaplain Eric Light of Kingsport, Tennessee, was away from his wife and three children for the first time.
"If I didn't feel like this is where I needed to be, I think it'd be horrible," Light said between homilies. "Our holidays are so tied to our families, it's nearly impossible to re-create here."
But the soldiers tried, with steak-and-crab-leg dinners, with competitive skits to win a 42-inch plasma TV for the base, with Christmas presents left unopened for weeks so they could have that old feeling of anticipation.
Many were familiar with the stilted, duty-driven celebration. They'd missed the holiday before, some as many as four since 2001.
"Next year, when we're all home for Christmas ..." Sergeant Major Eric Crabtree of Clarksville, Tennesse, told the soldiers, then cut himself off.
"Insha'Allah," he said, using an Arabic phrase they've all heard. It means "God willing."