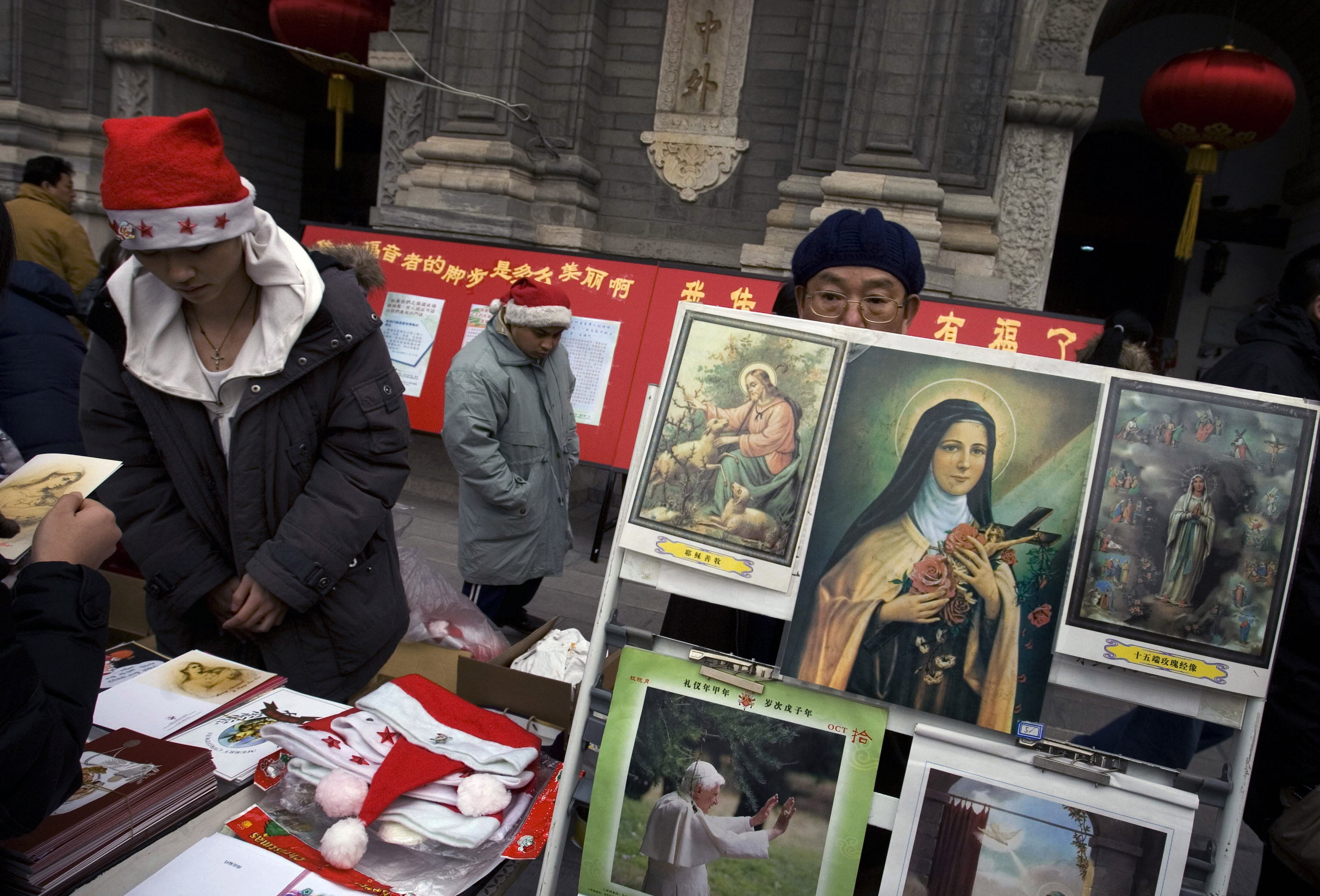 It was the week before Christmas, and the crush of shoppers elbowing their way past stalls at the Tian Yi market would have been familiar to holiday gift buyers anywhere.
So would the brightly colored baubles, red and gold bows, and strings of flashing lights from which the crowds were choosing: After all, China manufactures over 80 percent of the world's Christmas decorations.
But now those decorations are increasingly brightening the streets, offices, and homes of China itself, as Chinese young people embrace a foreign festival with growing fervor.
"We love our Oriental culture, but we are open to new things, too," says Yuan Yonghong, branch manager of a beauty products company, as she chooses the decorations that will grace the office party she is organizing. "And this is new for us."
Some of it is new even to Westerners familiar with Christmas traditions. Outside the Tian Yi market, for example, sits a tableau of Santa Claus being pulled by two reindeer ? and a kangaroo.
"The pace of life is so hectic now, we love to celebrate holidays," explains Ms. Yuan, even though she gets no time off over Christmas. And one favorite way to celebrate in China is to go shopping.
Gift exchanges
Not to buy gifts, or at least not often. Christmas presents are hardly known in China, though young lovers here are beginning to use December 25 as a surrogate Valentine's Day, and may exchange gifts. Most shoppers, however, are simply indulging a little more heavily than usual in the consumer frenzy that has swept Chinese cities for the past few years.
That, says Guo Zengli, is what explains the Christmas trees strung with festive lights outside shops and malls around the country, the Santa Claus stickers emblazoned with "Merry Christmas" (in English) that decorate their doors, and the Western Christmas music piped through their aisles.
Guo is the head of Mall China, a trade association that groups owners of the country's booming shopping malls, and he is blunt about the meaning of Christmas in China.
"Chinese malls decorate their stores ?to create a festive atmosphere. More people go shopping during holidays, so stores sell more. That is why Chinese stores have Christmas."
An Mi, spokeswoman for one of China's biggest electronics retailers, Gome, says that December sales now rival the traditional spike months for Chinese retailers, May and October, when consumers enjoy week-long holidays to celebrate International Labor Day and National Day.
A means to an end
This commercialization of a religious festival has long been a concern of Christian leaders in the West. It doesn't worry some Chinese priests.
In China, hardly anyone knows the original reason for the holiday, they point out: Barely three percent of the population is Christian. Under those circumstances, priests are more indulgent toward shopkeepers' motives.
"They don't understand the religious significance of Christmas," says Li Yonghong, who runs a Protestant church in Beijing. "They use it as an opportunity to make money, but we should look at this from a positive perspective.
"I think commercial activities help ordinary Chinese to know about Christmas, and to understand Christmas," she adds.
"If they celebrate Christmas, they may start getting interested in Christianity," echoes Liu Cuimin, pastor of another Protestant church in the capital. "Maybe this kind of interest can bring people to the church."
Young people, especially in cities where Western influences are strongest, have adopted Christmas as an opportunity to go out with friends and workplace colleagues for a good time.
Adopting Western styles
While the Chinese Lunar New Year remains a traditional, family affair, Christmas has a more exotic air, giving young people a chance to invent new ways of celebrating it.
"I'll go to a party, or to a karaoke bar with my friends," says Yuan.
Her friend, Li Shuying, nods in agreement. "We don't know how to cook a turkey," she admits. "So we might go out to a pizza restaurant, or go and eat barbecue. That's kind of Western, isn't it?"