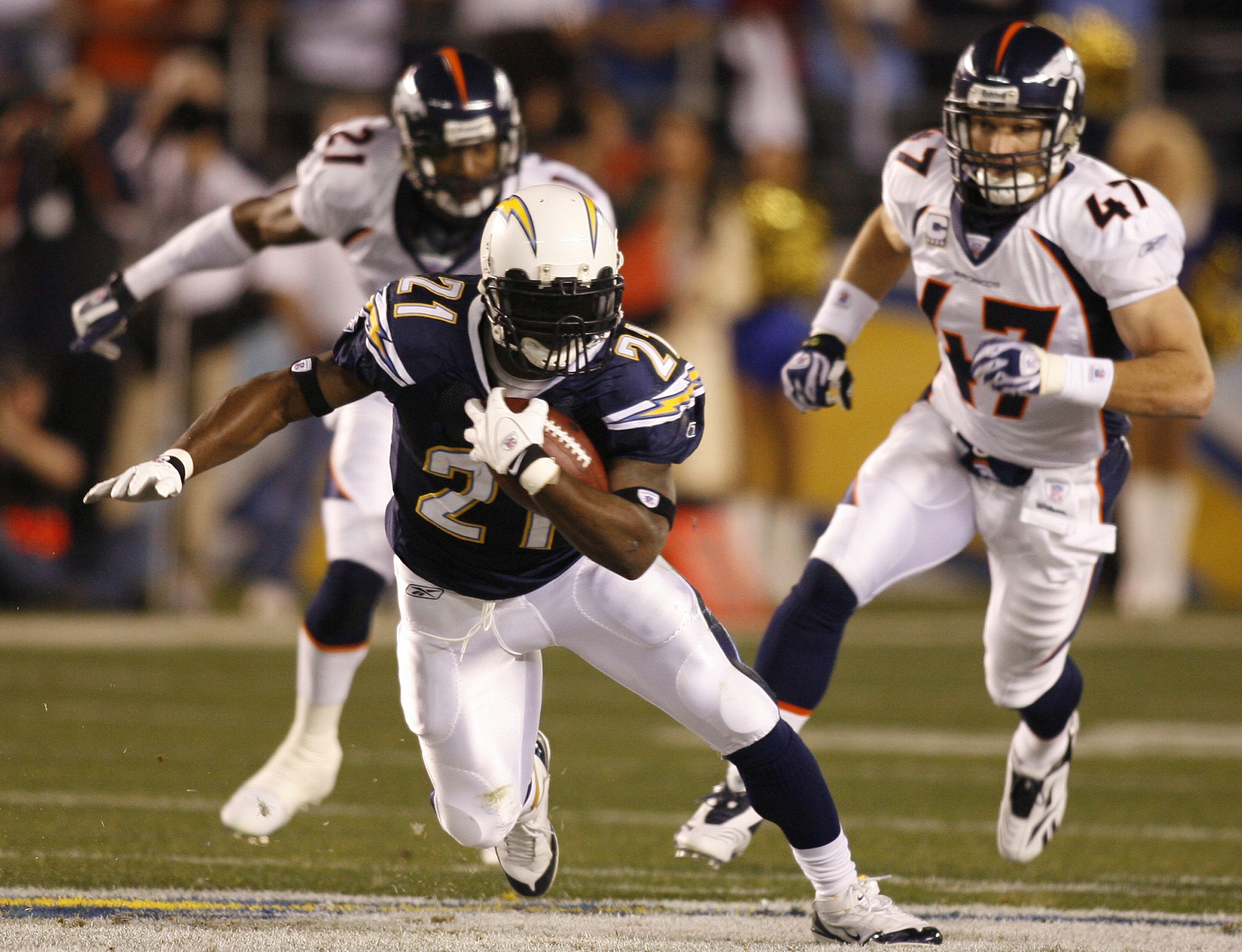 Plenty of moments served to capture the spirit of the Denver Broncos' ugly 23-3 loss Monday night to the San Diego Chargers.
Perhaps it was Chargers running back LaDainian Tomlinson putting a move on Broncos safety Domonique Foxworth in the open field and breezing by him for a 17-yard touchdown. Maybe it was one of the times Broncos quarterback Jay Cutler was on his back while a Chargers player invented a new sack dance, or possibly a ball going through tight end Tony Scheffler's hands for a Chargers interception. Denver punter Paul Ernster flubbing punts a few yards downfield also would be appropriate.
In almost every way, the Broncos took a season's beating at Qualcomm Stadium from a team that looked worthy of its AFC West crown. The best news for 6-9 Denver might be that only one game remains in its season, which will be the second losing campaign in coach Mike Shanahan's 13 seasons.
Denver started well before setting the tone for the rest of the night. The Broncos moved to San Diego's 18-yard line, and on third and 7, Cutler stepped up to avoid a sack and started running for a first down. But Chargers defensive end Luis Castillo hit him, the ball popped out and San Diego recovered the fumble.
"That took a little momentum away from us," said Cutler, who was sacked four times and said his left knee was sore, but he would play in the season finale against Minnesota.
San Diego led 16-0 at halftime after outgaining Denver 220 yards to 55. The Chargers had 12 first downs to the Broncos' three and held the ball almost nine minutes longer than Denver.
Tomlinson had 80 yards rushing at halftime, 25 more yards than Denver had passing and rushing. Tomlinson took over the NFL rushing lead with 107 yards on 19 carries. The Chargers increased their lead to 23-0 on an 84-yard drive to start the second half that was capped by Chris Chambers' 14-yard touchdown.
Denver finally got past midfield again midway through the third quarter. Cutler threw to Scheffler on third down, but he dropped the ball and it fell into the hands of Chargers safety Clinton Hart.
"For us to be able to do this at home in front of our crowd on Christmas Eve, it's great," Hart said.
Denver's Jason Elam kicked a 23-yard field goal, but it capped a 2-yard drive. San Diego lost a fumble on its 7-yard line but the Broncos couldn't score a touchdown.
In the fourth quarter, Denver had third and 2 at San Diego's 3-yard line but couldn't get a first down on two straight carries by fullback Cecil Sapp.
The Broncos are mystified by the offensive inconsistency. Denver scored 41 points against Kansas City on December 9 and has 16 points since.
"Sometimes we have great continuity and things look great, some weeks it's like we don't even have a pulse," Lepsis said.
This season the Broncos were outscored 64-6 by the Chargers. San Diego has won four in a row against Denver. "We've got to start winning games to make it a rivalry," Cutler said.