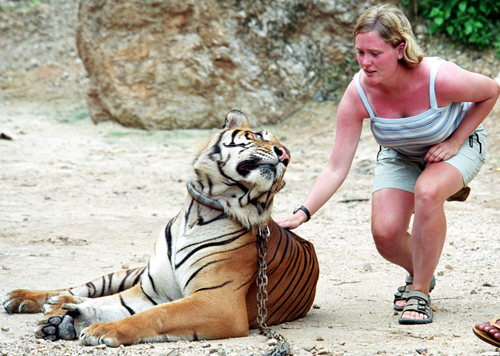 Thailand's parks and wildlife reserves could hold up to 2,000 wild tigers, about three times their current level, but only if the government steps up efforts to control poaching, researchers said yesterday.
The country's Western Forest Complex, 18,000 square kilometers of protected jungle habitat, currently holds 720 tigers, according to a study by Thailand's Department of National Park, Wildlife, and Plant Conservation and the New York-based Wildlife Conservation Society.
However, the area could support nearly three times as many tigers, as long as the government keeps its remaining forests intact and beefs up its anti-poaching efforts.
"Thailand has the potential to be a global centerpiece for tiger conservation," said Anak Pattanavibool of the Wildlife Conservation Society's Thailand Program and a co-author of the study.
"This study underscores that there is an opportunity for tigers to thrive in Thailand provided tigers and their major prey species are protected from poachers."
Using survey data from camera traps in Thailand's Huai Kha Khaeng Wildlife Sanctuary in 2004, Anak and his team were able to determine that the density of tigers in this rugged and hilly reserve located about 300 kilometers west of the capital, Bangkok, were three times lower than in comparable, but better-protected tiger reserves in India.
As a result, Anak surmised that reserves like Huai Kha could support many more tigers.
Conservationists in Thailand agreed the tiger numbers could be increased, but only if the government does more to eliminate trafficking networks that operate out of the country. Part of the problem, they said, is that the courts until now have refused to jail tiger traffickers, choosing instead to hand down small fines.