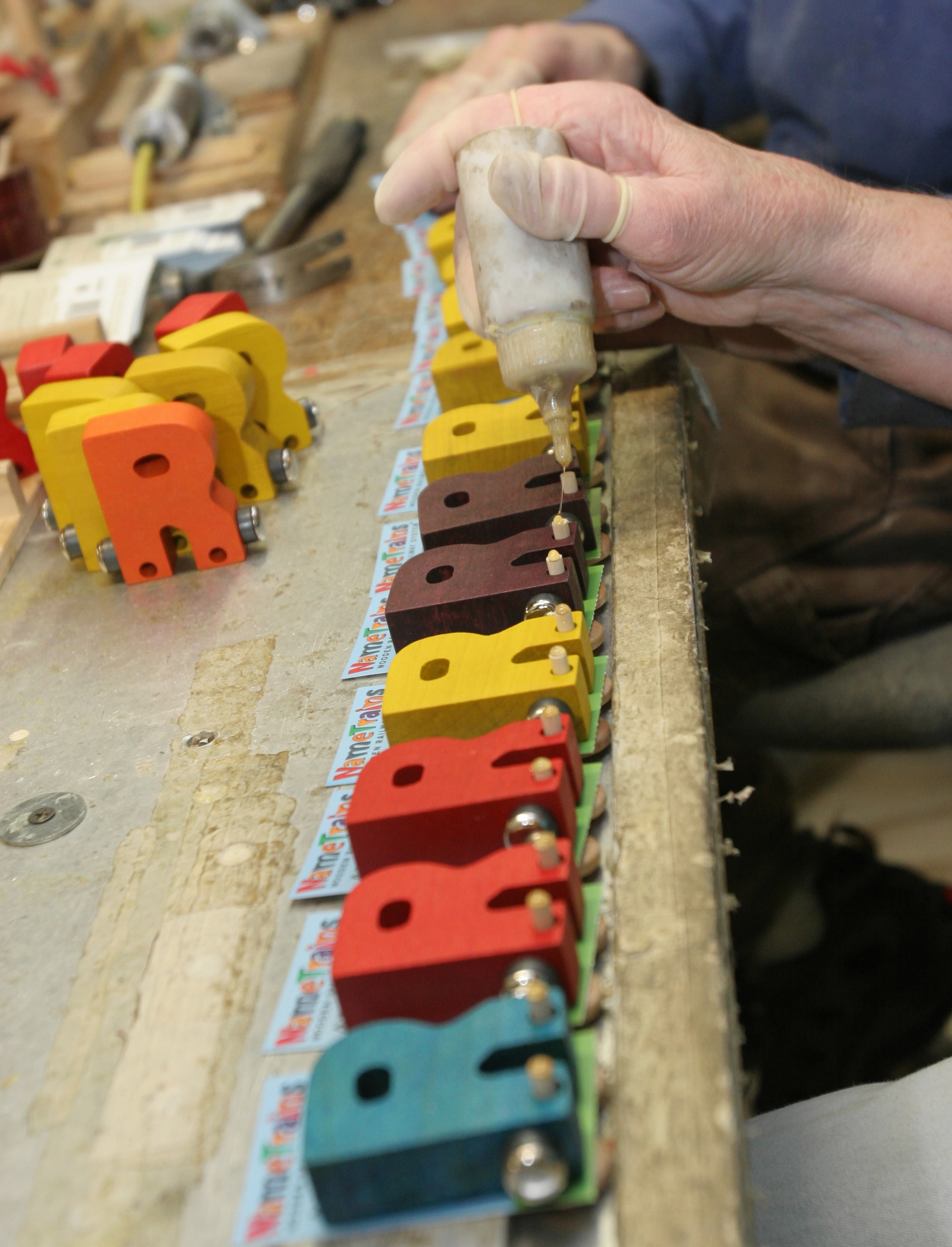 Despite the inescapable presence of 150 half-filled orders taped to the wall, the atmosphere in the assembly room at Maple Landmark remains calm during this final push before Christmas. Women seated at the NameTrain workbench banter as cars for the letter "O" take form beneath their hands. A woman fixes magnets to the ends of each item before passing it to someone who inserts axles. By the end of the line, every "O" car is complete - a small rolling entity that retails for US$5.
Boxes of dominos, baby rattles, and wooden jeeps are stacked around the room, evidence of a productivity that would make Henry Ford proud. Parts for the toys are manufactured downstairs through the same marriage of automation and the touch of human assembly. In the graphics room, a laser engraves ties on train tracks under watchful eyes, while in an adjacent area workers run the routers that cut the tracks as well as the sanders that smooth them.
Overseeing it all is the company's president, Mike Rainville, whose management style combines a concrete linearity (he majored in engineering) with Vermont informality and a storyteller's heart. Rainville is seemingly everywhere. In one motion he checks the progress of the trains, sifts through a bin of wheels, then stops to say hi to his grandmother, who is assembling Soma cubes at a nearby table.
Meanwhile, the orders loom, reminders of all that must be done. "Our inventory's been toast," says Rainville. "We've been running as fast as we could since Labor Day."
Rainville remembers exactly what he was doing on June 14, the day the recall of 1.5 million lead-contaminated Thomas & Friends' railway toys manufactured in China was announced.
Returning home from a history competition in Maryland with his son, he heard the news on a TV monitor at Dulles International Airport. The two had been staying in a campus dorm, "kind of out of communication," says Rainville, so the report came as a shock.
At first, business at Maple Landmark suffered as his dealers scurried to address the problem. Soon the same dealers were reaching to satisfy increased demands for U.S.-made products, and Rainville saw sales of his varied line of games and toys - everything from wooden jeeps to school buses to police cars - "modestly rising."
Then, two months later, came the second big recall - some 19 million toys this time. Rainville was in a meeting when the news was announced. "I got out and there were calls from the New York Times, MSNBC, the Houston Chronicle, and FOX," he says.
Like many other U.S. toymakers, the sanders and routers inside Maple Landmark began whirring even more incessantly. The workforce was increased by two-thirds, to 44 employees. (In addition to his grandmother, other longtimers include his mother, wife, sister, and - as frequently as the school schedule permits - his two sons, 14 and 12.)
Maple Landmark's 2007 fourth-quarter sales this year are up 60 percent from 2006. The current backlog of orders is triple that of last year, and by the Wednesday after Thanksgiving the company had to start telling customers it could not guarantee deliveries by Christmas.
Rainville welcomes the business, of course, but the boon has brought challenges, too. "We weren't really structured for this," he says. "We believe in dealing with all our customers on a personal level and that's been hard to do. Some people think it's great that we're busy, but from others it's, 'Why don't you have your act together?' "
To his mind, the recall of 25 million toys from China was inevitable. "We've tied ourselves very closely to an economy that is contrary to our beliefs," says Rainville, citing concerns about pollution, exploitation, and "a lack of respect for the things that this country stands for.... The business that goes over there is looking to find shortcuts, and they got what they paid for."
He buys as many materials locally as possible - wood from nine miles up the road, a finish developed at the nearby university - and will continue the practice. Rainville doesn't sell to many large retailers, but sticks to specialty stores. "We haven't let the large retailers beat us into submission, and we're not going to," he says.
As Rainville speaks, a bevy of workers in the shipping bay readies packages for pickup. Dozens of boxes will fan out to toy stores and families across the country. It's another chapter in the story Rainville imagined for his life - 2,200 customers and counting.