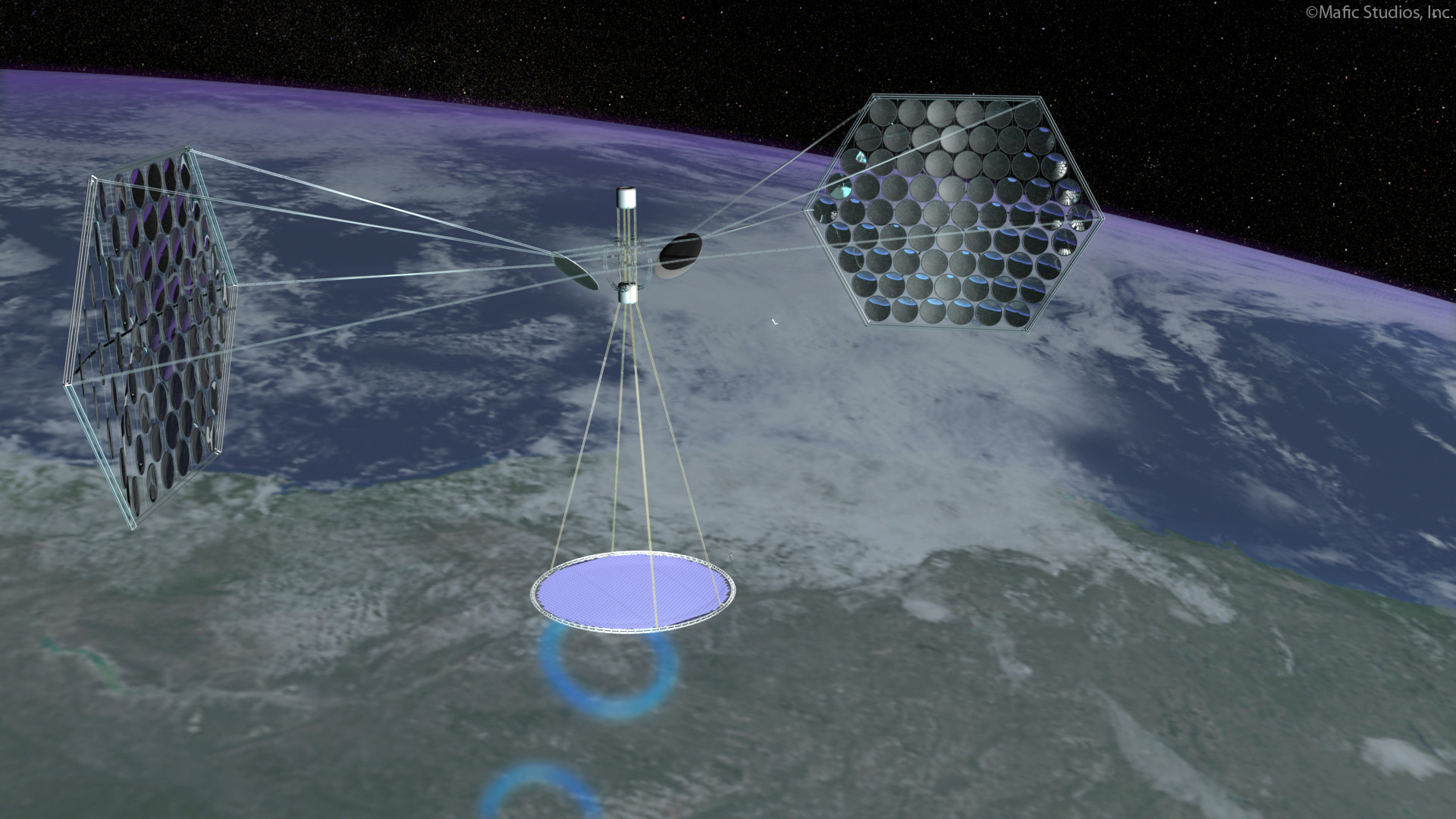 While great nations fretted over coal, oil and global warming, one of the smallest at the U.N. climate conference was looking toward the heavens for its energy.
The annual meeting's corridors can be a sounding board for unlikely "solutions" to climate change - from filling the skies with soot to block the sun, to cultivating oceans of seaweed to absorb the atmosphere's heat-trapping carbon dioxide.
Unlike other ideas, however, one this year had an influential backer, the Pentagon, which is investigating whether space-based solar power - beaming energy down from satellites - will provide "affordable, clean, safe, reliable, sustainable and expandable energy for mankind."
Tommy Remengesau Jr. is interested, too. "We'd like to look at it," said the president of the tiny western Pacific nation of Palau.
The U.S. Defense Department this October quietly issued a 75-page study conducted for its National Security Space Office concluding that space power - collection of energy by vast arrays of solar panels aboard mammoth satellites - offers a potential energy source for global U.S. military operations.
It could be done with today's technology, experts say. But the prohibitive cost of lifting thousands of tons of equipment into space makes it uneconomical.
That's where Palau, a scattering of islands and 20,000 islanders, comes in.
In September, American entrepreneur Kevin Reed proposed at the 58th International Astronautical Congress in Hyderabad, India, that Palau's uninhabited Helen Island would be an ideal spot for a small demonstration project, a 79-meter-diameter "rectifying antenna," or rectenna, to take in 1 megawatt of power transmitted earthward by a satellite orbiting 480 kilometers above Earth.
That's enough electricity to power 1,000 homes, but on that empty island the project would "be intended to show its safety for everywhere else," Reed said in a telephone interview from California.
Reed said he expects his U.S.-Swiss-German consortium to begin manufacturing the necessary ultralight solar panels within two years, and to attract financial support from manufacturers wanting to show how their technology - launch vehicles, satellites, transmission technology - could make such a system work. He estimates project costs at US$800 million and completion as early as 2012.
At the U.N. climate conference here this month, a Reed partner discussed the idea with the Palauans, who Reed said could benefit from beamed-down energy if the project is expanded to populated areas.
"We are keen on alternative energy," Palau's Remengesau said. "And if this is something that can benefit Palau, I'm sure we'd like to look at it."
Space power has been explored since the 1960s by NASA and the Japanese and European space agencies, based on the fundamental fact that solar energy is eight times more powerful in outer space than it is after passing through Earth's atmosphere.
The energy captured by space-based photovoltaic arrays would be converted into microwaves for transmission to Earth, where it would be transformed into direct-current electricity.
Low-orbiting satellites, as proposed for Palau, would pass over once every 90 minutes or so, transmitting power to a rectenna for perhaps five minutes, requiring long-term battery storage or immediate use - for example, in recharging electric automobiles via built-in rectennas.
Most studies have focused instead on geostationary satellites, those whose orbit 35,680 kilometers above the Earth keeps them over a single location, to which they would transmit a continuous flow of power.
The scale of that vision is enormous: One NASA study visualized solar-panel arrays 5 kilometers by 10 kilometers in size, transmitting power to similarly sized rectennas on Earth.
Each such mega-orbiter might produce 5 gigawatts of power, but how safe would those beams be?
Patrick Collins of Japan's Azabu University, who participated in Japanese government studies of space power, said a lower-power beam, because of its breadth, might be no more powerful than the energy emanating from a microwave oven's door. The beams from giant satellites would likely require precautionary no-go zones for aircraft and people on the ground, he said.
Rising oil costs and fears of global warming will lead more people to look seriously at space power, boosters believe.
"The climate change implications are pretty clear. You can get basically unlimited carbon-free power from this," said Mark Hopkins, senior vice president of the National Space Society in Washington.
"You just have to find a way to make it cost-effective."
Advocates say the U.S. and other governments must invest in developing lower-cost space-launch vehicles. "It is imperative that this work for 'drilling up' vs. drilling down for energy security begins immediately," concludes October's Pentagon report.
Some seem to hear the call. The European Space Agency has scheduled a conference on space-based solar power for next February 29. Space Island Group, another entrepreneurial U.S. endeavor, reports "very positive" discussions with a European utility and the Indian government about buying future power from satellite systems.
To Robert N. Schock, an expert on future energy with the U.N.'s Intergovernmental Panel on Climate Change, space power doesn't look like science fiction.
The panel's 2007 reports didn't address space power's potential, Schock explained, because his team's time horizon didn't extend beyond 2030. But, he said, "I wouldn't be surprised at the beginning of the next century to see significant power utilized on Earth from space - and maybe sooner."