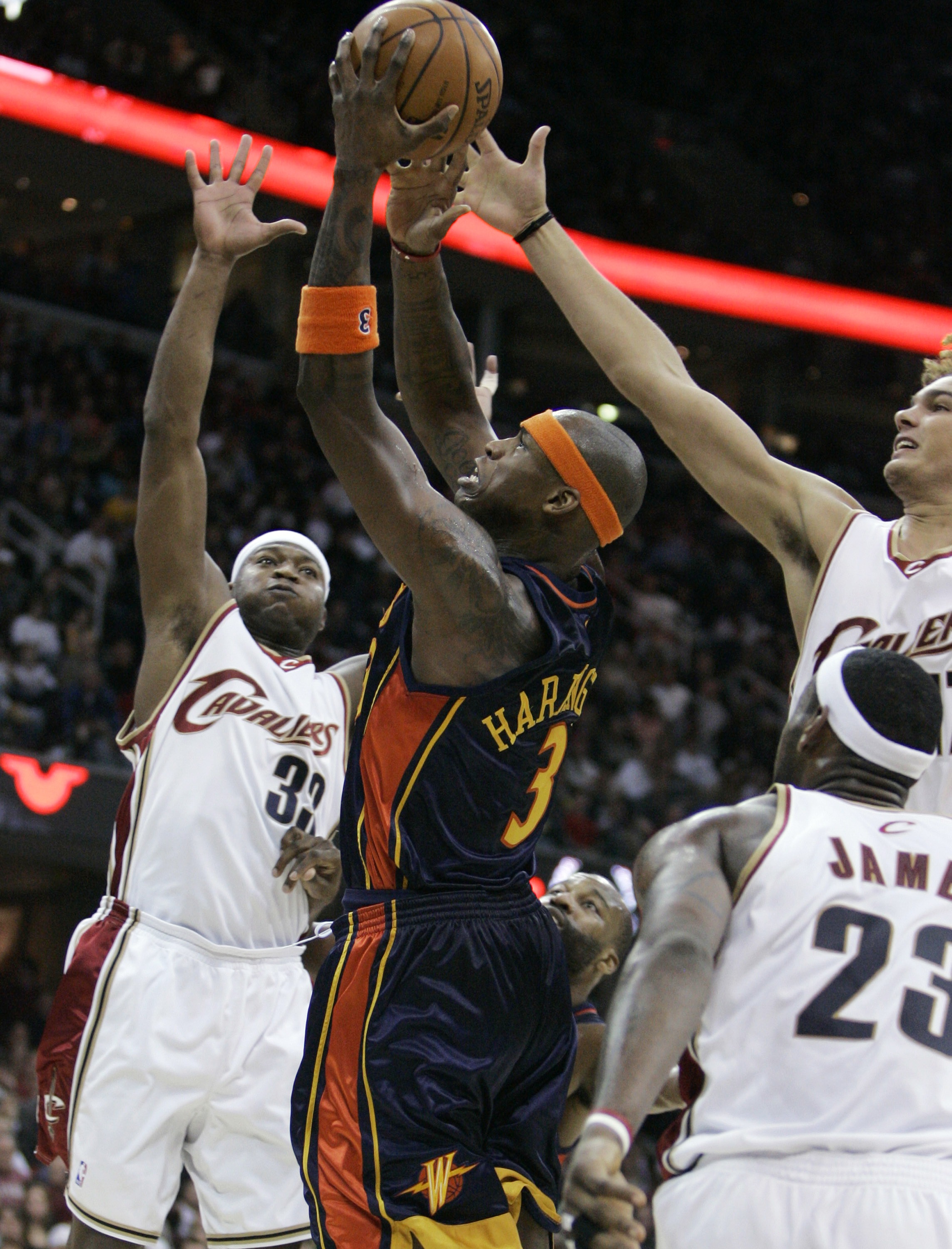 For weeks now, Golden State Warriors coach Don Nelson has been waiting for karma to drop that other shoe directly onto his cranium, worrying that an injury or fatigue or just plain old bad luck would knock his team for a loop.
But after 28 games this season, it hasn't happened yet. And with Golden State having assured itself in grand style of finishing out 2007 with no worse than a .500 record, perhaps it's time to start reassessing where the Warriors rank in the NBA's pecking order.
Maybe, in short, the Warriors really are this good.
Certainly they were Sunday, when Golden State totally outclassed the Cleveland Cavaliers by a deceivingly close final score of 105-96.
Despite having captains Baron Davis and Stephen Jackson both gimping on injured legs and playing for the second night in a row, the Warriors (16-12) showed ruthless efficiency. They opened up a 23-point lead in the first half, bumped it to 28 in the third quarter and drove a sellout crowd of 20,562 at Quicken Loans Arena to set upon its own team - NBA Finalists last season but 12-16 so far this year - with some merciless booing.
Davis and Jackson combined for 56 points - 27 for Davis, 29 for Jackson - 10 rebounds and 13 assists in 93 minutes of action. Monta Ellis added 19 points and Al Harrington had 16 points and nine rebounds as the Warriors became the first team in franchise history to complete two winning road trips of five or more games since the 1973-74 club.
"From our (0-6) start and everything else, it's been an incredible ride," Nelson said. "I keep waiting for it to catch up to us and we seem to keep postponing that. It's hard to read our team. I wish we'd be a little more consistent."
The Warriors didn't appease Nelson's appetite on that front, instead following four feeble starts with a scalding display of early shooting. Golden State sank 13 of 17 shots in the first quarter, going 5-for-6 on 3-pointers, to outscore the Cavaliers 38-22 in the period. It was the first time in 10 games that the Warriors held a lead after 12 minutes.
"We had to bounce back from (Saturday) night," said guard Monta Ellis, referring to a come-from-ahead 100-95 defeat against New Jersey. "We came out with a loss that we should have won, so we just wanted to come out . . . and set the tempo for the game, and that's what we did."
Jackson and Davis led the way in that regard, scoring 11 and 10 points, respectively, in the quarter. Both captains had been told by authority figures to take the night off, and both gave that idea some thought before deciding otherwise; Nelson wanted Davis to rest after taking a knee to his right thigh in the first half of Saturday's game, and Judyette Jackson wished that her son, who hyperextended his knee in the fourth quarter Saturday, would do the same.
"I wasn't feeling too good this morning and I couldn't even bend it," Jackson said. "I'm going to pay for it, but winning this game, going home 3-2, it's going to take a little bit of the pain away. We didn't want to come home with a loss."
The Warriors made sure that didn't happen after building their big lead by totally smothering the Cavaliers' shooting guards. Sasha Pavlovic and Larry Hughes were 3-for-15, total nonfactors in terms of providing James some support.
After the win, Jackson counseled against the team getting to far ahead of itself.
"We need to stay humble," Jackson said. "We need to keep that 'we-haven't-done-anything' attitude. We want to keep the confidence and our swag, and keep our identity, but we don't want to get too high"
Youngest to 20,000
Kobe Bryant scored 39 points, becoming the youngest player in National Basketball Association history to reach 20,000, and the Los Angeles Lakers held off the New York Knicks 95-90 Sunday.
Bryant added 11 rebounds and eight assists in his first game at Madison Square Garden in nearly two years. His 3-pointer in the opening minute of the third quarter allowed him to reach the milestone at the age of 29 years, 122 days.
In other NBA action: Detroit 94, Houston 82; Boston 103, Orlando 91; Denver 106, Sacramento 105.