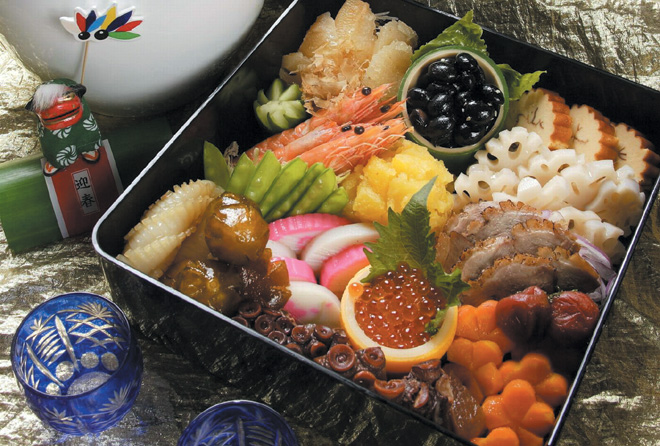 For every holiday, there is a tradition of feasting on a certain food which symbolizes the essence of the festival: rice dumplings for Dragon Boat Festival; barbecue and moon cakes for Mid-Autumn Moon Festival; turkey for Thanksgiving; and for New Year's, the latest trend is the Japanese New Year's Cuisine, eaten on January first to celebrate the arrival of another year.
WASABI Japanese Buffet, managed by Formosa International Hotels Corporation and located on the fourth floor of Taipei 101 Mall, has built up a good rapport with its exclusive selection of quality Japanese New Year dishes. This January, an exquisite selection of appetizers, cold and hot dishes, fried foods, grilled foods and more will be available at WASABI Taipei and Hsinchu (9F FE21 Mall) for an exotic taste of New Year's!
Solar New Year to the Japanese is like Lunar New Year to the Chinese; family members gather after a year of hard work to spend some quality time together, and most people order a New Year's Feast to take home so that Mom would not have to slave over the hot stove during the holidays. Thus, many of the dishes in the Feast are pickled so that they can be preserved for longer and eaten cold over a course of five days. "Of course, to suit the preferences of the Taiwanese population, there will still be an abundant amount of sashimi, sushi, steamy hot pot and various desserts on the buffet bars," says WASABI's Executive Chef Yang Chen-chuang. "We recommend guests to observe the appearance of each dish, because the choice of shape and color is especially important as they represent fortuity. "
Available as a part of the Traditional Japanese New Year Cuisine are sweet celebratory appetizers such as Sugar marinated black soy bean, the Japanese pronunciation of which sounds similar to words of encouragement, and Chestnut & azuka bean symbolizing a treasure chest. Savory appetizers include Salmon roe and cucumbers for abundant offspring, Seaweed rolls and egg rolls for joy. In the cooked foods division, there is the hexagonal Boiled taro to signify longevity, and Red and white fish cakes for happiness. The Codfish and Salmon soup found at the hot bars also have a feeling of celebration. Come and learn the meaning of a festive Japanese cuisine and eat to the heart's content!
For reservations, please call WASABI Taipei (4F Taipei 101 Mall) at (02)8101-8166, or WASABI Hsinchu (9F FE21 Mall) at (03)523-8008.