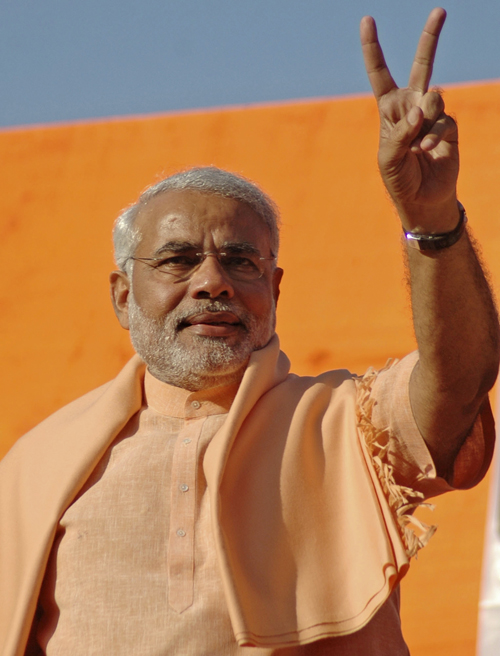 Controversial Hindu nationalist party leader Narendra Modi swept back to power in India's religiously divided Gujarat state yesterday in what was called a national victory over the rival Congress Party.
The Congress loss in the Hindu nationalist bastion, though expected, was the fourth setback in regional polls this year for the party, which governs nationally, and raised questions about its federal poll prospects in 2009.
The Modi-led Bharatiya Janata Party won 117 seats in the 182-member state legislature, leaving Congress trailing with just 59 seats, the commission said.
Another six seats were picked up by small parties or independent candidates.
Analysts had forecast the BJP could win almost two thirds of the total, or just shy of the 127 it won in 2002, while Congress was predicted to increase its tally marginally from 51.
The BJP, blamed for stoking anti-Muslim riots in the western state in 2002, had done well in regions where scores of debt-ridden farmers committed suicide in the past few years, pollsters said.
The victory provides a political momentum for Modi, 57, who came to prominence in October 2001 when he was appointed Gujarat chief minister months after a devastating earthquake in the state left some 25,000 people dead.
In 2002 he won outright in elections called after the riots.
A senior BJP leader said the win was a "turning point" for his party, which lost federal power in 2004.
"State assembly elections are quite frequent in our country but rarely does the people's verdict in a particular state become a turning point for national politics," said Lal Krishna Advani, the party's prospective prime ministerial candidate.
"This is a victory for the BJP and Modi's record on development," BJP party chief Rajnath Singh told reporters shortly after Congress conceded.
Development platform
Modi ran on a development platform in Gujarat, one of India's most affluent states and the birthplace of Mahatma Gandhi.
Modi, however, is better known in India as a controversial figure who has been frequently accused of encouraging sectarian riots in 2002, which saw at least 2,000 Muslims hacked or burned to death.
The violence erupted after 59 Hindu pilgrims died in a train fire first blamed on a Muslim mob, but which an inquiry later concluded was accidental.
Rights activists were aghast at the election result.
"I would concede that he has better organizational abilities and some connection to the people," a grim-looking Teesta Setalvad, an advocate for the riot victims, told the CNN-IBN channel.
"But I would not concede that he stands for constitutional government and the rule of democracy. I personally see a very troubled time ahead because of the kind of politics he represents."
Some political analysts have predicted a Modi win might be a harbinger of a resurgence of the party's brand of Hindu nationalism, which hit a popularity peak in the 1990s before declining.
"He virtually repeats his 2002 win. After a long time we are seeing a pro-incumbency win," Chandan Mitra, editor of the pro-BJP Pioneer newspaper, said on CNN-IBN.