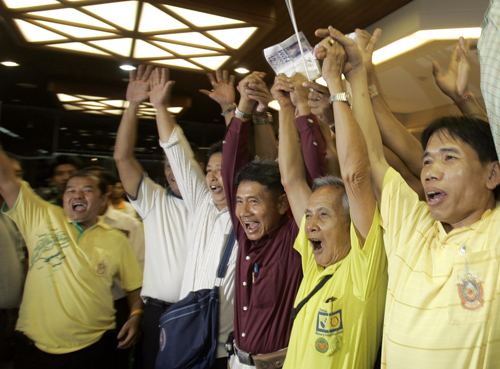 Allies of deposed Thai Prime Minister Thaksin Shinawatra appeared to emerge as victors in Thailand's post-coup election yesterday but failed to secure an absolute majority in parliament, according to unofficial results from the Election Commission.
The outcome is likely to deepen the country's two-year political crisis.
With 80 percent of the vote counted, the pro-Thaksin People's Power Party won 230 seats in the 480-seat lower house of parliament, the Election Commission said.
The rival Democrat Party won 161 seats.
Thaksin was ousted in a bloodless coup in September 2006 but retains widespread popularity among the rural majority. PPP campaigned on a platform of bringing Thaksin back from exile in London and continuing his populist policies.
Full results were expected before midnight (Thailand time) yesterday in an election billed as a return to democracy after 15 months of military-backed government.
Failure to capture an absolute majority might allow the Democrat Party to bring in partners to form a coalition government.
Intense horse-trading is expected in coming days, even weeks, before a government is formed and a new prime minister announced.
Earlier, a Dusit poll for Bangkok's Suan Dusit Rajabhat University forecast the PPP had won a majority with 256 seats, compared to 162 for the rival Democrat Party.
The Dusit poll surveyed 341,000 voters nationwide before polling stations closed at 3 p.m. (Thailand time). It had a margin of error of plus or minus 5 percentage points.
"I saw the polls. We are not surprised. From what we surveyed two weeks ago and the polls that came out before, we will have more than 240," said Surapong Suebwonglee, secretary-general of the PPP.
He said the party would try to control more than 300 seats by attracting coalition partners. "We will set up a coalition government, but it's too early to say who we will partner with," he said, calling the election results a "victory for the people and for democracy."
Voters among the 45 million eligible cast ballots for about 5,000 candidates from 39 political parties.
The contest pitted the PPP, seen as a reincarnation of Thaksin's outlawed Thai Rak Thai Party, against the Democrat Party, the country's oldest.
PPP leaders said Thaksin, who was watching the election from Hong Kong, would return to Thailand early next year, sparking fears of continued political turbulence and sharp polarization.
"The economy was prosperous when Thaksin was prime minister and I voted for the People's Power Party because the party leader promised to bring Thaksin back to the country," said Pranee Teamsri, the owner of a tailor shop on Bangkok's outskirts after emerging from a polling station.
But others in Bangkok, where the Democrat Party is strong, criticized Thaksin's regime for its corruption, saying the former leader had left Thailand in "a mess."
The Dusit poll predicted the PPP had swept the vital northeast, a populous region of impoverished farmers, with 109 of 135 seats.
The Chart Thai party, a likely Democrat ally, emerged third with 29 seats, according to the Dusit poll.
The top rivals for next prime minister are a study in stark contrasts.
PPP's head Samak Sundaravej, 72, is an acid-tongued, ultra-rightist dubbed a political dinosaur by the local press. He has been charged with involvement in corrupt deals while serving as Bangkok's mayor. But he is seen as Thaksin's proxy and his earthy style appeals to many.
The 43-year-old Abhisit Vejjajiva, who leads the Democrats, is regarded as an intelligent, honest politician but lacking the common touch needed to connect with the mass electorate. English-born and educated at Eton and Oxford, critics say he is more comfortable in elite circles than wooing the key rural voters.
Thaksin faces a slew of corruption charges but remains popular among the rural masses and lower income urban residents to whom he offered cheap loans, virtually free medical care and village based development schemes.
The prospect of Thaksin's return has raised fears of another coup by the powerful military.