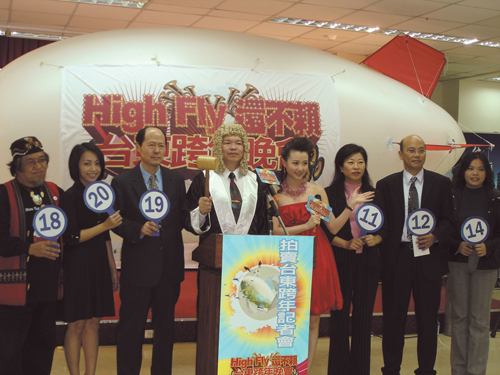 Chou Hui-wen (4th from left) auctioned the model vessel balloon at a press conference in Taipei on December 19.
The Taitung County Government on December 19 organized an auction at the Tourism Bureau in Taipei to sell a banner attached on a ten-meter long vessel balloon, which will be set to fly on New Year's Eve.
Chou Hui-wen, deputy director of the Tourism Bureau of Taitung County Government, dressed up as a judge and offered the huge banner at an initial price of NT$1.
"The auction will continue till December 30," said Chou. "And before that day, everyone has a chance. It can be used to propose, apologize or for commercial advertisement. There will be live TV broadcasting when the vessel balloon rises in the sky"
Besides the large vessel balloon, some famous performing artists will also appear at Taitung County's New Year countdown party "High Fly", such as singer Yang Peian? Kan Kan, Lee Wei, Huang Kuo-luen, as well as local aboriginal singer Francesca Kao, Bei-Yuan-Shan-Mao, and Ji-Wa-Sz-Du-Lan.
The government also cooperated with local companies to promote a three-day countdown tourism package in Taitung. Visitors can ride a bike touring around Taitung's beautiful natural landscapes and greet the first sun rays at the beach in Taimali Township.