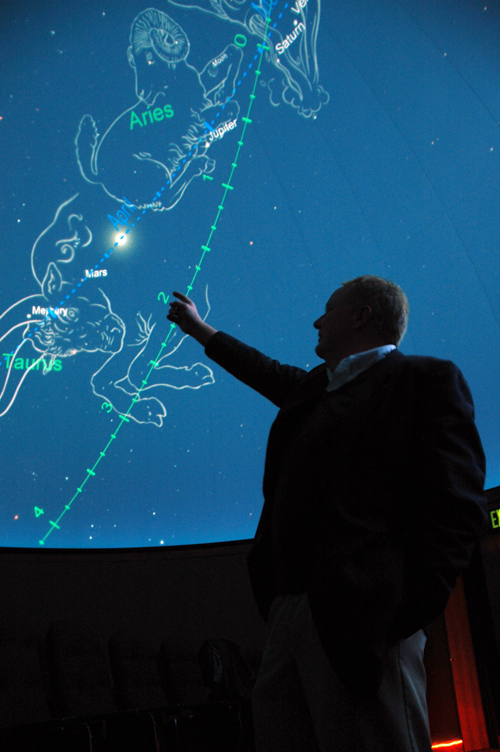 It's long been a puzzle for Christian astronomers, and now a professor from the University of Notre Dame thinks he has it figured out - almost, anyway.
His quest: discovering just what "the star in the East" was that led wise men to travel to Bethlehem 2,000 years ago.
As a theoretical astrophysicist, Grant Mathews had hoped the answer would be spectacular - something like a supernova. But two years of research have led him to a more ordinary conclusion. The heavenly sign around the time of the birth of Jesus Christ was likely an unusual alignment of planets, the sun and the moon.
The star has long been immortalized in Christmas songs, plays and movies. Astronomers, theologians and historians for hundreds of years have been trying to determine exactly which star might have inspired the biblical writing. German astronomer Johannes Kepler proposed in 1604 that the star was a conjunction of Mars, Jupiter and Saturn in 7 B.C.
The advantage Mathews has over Kepler and others who have pondered the question is that he had access to the databases of the U.S. National Aeronautics and Space Administration.
"In principle, we can see any star that was ever made from the beginning of time if we knew where to look. So the question is, could we find a star that could be a good candidate for what showed up then?" he said.
Mathews found several possibilities. He began by posing three questions he would ask when trying to find the answer to any astronomical event: When did it occur? What were its characteristics? Did anyone else see it?
The Gospel of Matthew indicates Jesus was born in Bethlehem when Herod was king. Roman historian Flavius Josephus wrote that Herod died after an eclipse of the moon before the Passover. Mathews said among the possibilities are 6 B.C., 5 B.C., 1 B.C. or 1 A.D. The star could have appeared up to two years before the wise men arrived in Jerusalem, he said.
Mathews believes that means the Christmas star could have appeared anywhere from 8 to 4 B.C - fitting in with some scholars' views on when Jesus was born.
Possibilities
Among the characteristics written about the star was that it appeared before sunrise and that it appeared to "rest in the sky." Mathews also found writings from Korean and Chinese astronomers of an event about 4 B.C. which described a comet with no tail that didn't move.
Using that set of facts, Mathews found several possibilities, including supernovas, novas and planetary alignments.
Mathews found two possible supernovas in the right period, but said one was probably too low on the horizon to be seen. The other supernova is known as Kes 75. But it was 60,000 light years away and may not have been very spectacular.
Planetary sign
He also found a number of nova that also could have been the Christmas star. The one he thinks is the most likely candidate is known as Nova Aquilae V603. The problem with novas and comets, though, is that they were believed in ancient times to be a sign of disaster, not a portent of good things to come.
For that reason, Mathews believes the Christmas star is most likely an alignment of planets. He said there are three likely times for this:
February 20, 6 B.C., when Mars, Jupiter and Saturn aligned in the constellation Pisces.
April 17, 6 B.C., when the sun, Jupiter, the moon and Saturn aligned in the constellation Aries while Venus and Mars were in neighboring constellations.
June 17, 2 B.C., when Jupiter and Venus were closely aligned in Leo.
Mathews believes the April 17, 6 B.C., alignment is the most likely candidate. It makes sense because he believes the wise men were Zoroastrian astrologers who would have recognized the planetary alignment in Aries as a sign a powerful leader was born.
Mathews concedes, though, that any of the other events could have been the famed star. Unless a document is discovered that allows historians to more accurately estimate exactly when Jesus was born, it will be impossible to say what caused the light with absolute certainty, Mathews said.