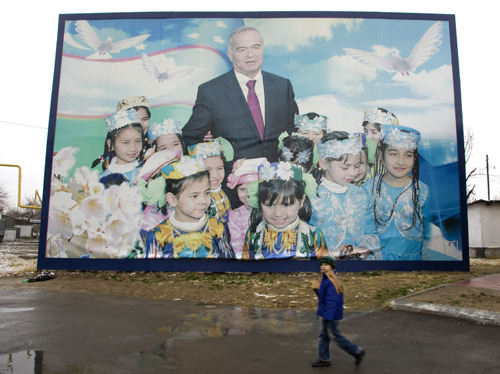 Azimzhan, his face weathered after years of making bread in a traditional Uzbek bakery, broke into laughter when asked about yesterday's presidential election.
"Obviously I will vote because that's what everyone will do. My family will vote, my neighbors will vote," he said in his dimly lit mudbrick shop in the Uzbek capital Tashkent.
"But it will not change anything. It's just another thing we have to do," he added, the fire from the tandyr oven flickering in his eyes.
Uzbekistan President Islam Karimov, in power since 1989, is all but certain to extend his long reign in yesterday's election in which he faces three friendly rivals.
He tolerates little dissent in his former Soviet country and public criticism of him is taboo.
The broad streets of central Tashkent, a mixture of Soviet-era buildings and Uzbek houses adorned with traditional Islamic patterns, have been devoid of almost all forms of campaigning in the run-up to the vote.
On the eve of the election, most people polled by Reuters shied away from any talk about the election.
But in the maze of the old city's narrow dusty streets, lined with clay houses, mosques and craftsman shops like Azimzhan's bakery, Uzbeks were more talkative, though keen to stay out of politics.
"If I can feed my family I am ok with that. I don't want anything else," said one man who asked to be called Mahmud.
The country has never held an election deemed free and fair by Western monitors but Karimov has promised a transparent vote and more democracy and reform if re-elected. This year, as previously, the European monitoring team will be very small.
"We have done everything to ensure the openness and fairness of the election," Central Election Commission Chairman Mirzoulugbek Abdusalomov said on Friday.
Anger and fear
Azimzhan, who would not give a surname, said he sends most of the money he earns back home to his native Andizhan - a city which jumped into the center of global attention in 2005 when troops opened fire on a protest there.
Azimzhan turned away when asked about the Andizhan events, his facial expression alternating between anger and fear.
Witnesses said in 2005 that hundreds of ordinary people were killed in Andizhan. The government has put the death toll at 187, saying most of them were terrorists or security forces.
Apathy
A lack of public debate and an almost invisible election campaign have generated apathy among ordinary people. Up to 5 million Uzbeks, mainly men, have left their homeland to seek a better life elsewhere, mainly in Russia and Kazakhstan.
Lying on the ancient Silk Road trade route linking Asia and Europe, Uzbekistan was once a key regional powerbroker that flourished in culture and business.
With its proximity to Afghanistan and vast energy resources, it now lies at the heart of a geopolitical battleground between the West and Russia, which still sees former Soviet Central Asia as its traditional sphere of interest.
It is still the world's No.2 cotton exporter and home to vast natural gas reserves.
But a third of its 27 million population lives in grinding poverty, and there are few incentives for entrepreneurs in a nation where the state controls the economy in a Soviet-style command system.
"Nothing has changed here since the worst Soviet years, everything is only getting worse," said one taxi driver.
Other candidates in the election include Dilorom Tashmukhamedova from the Adolat party, Asliddin Rustamov from People's Democratic party and Akmal Saidov, a parliamentary deputy. Karimov won the previous election in 2000 with 92 percent of the vote.
"For me this election is not an event," said a Western diplomat. "Maybe they are trying to show they have pluralism, maybe they want to mislead foreign countries."
Karimov's relations with the West soured after the Andizhan riot. Enraged with U.S. and European criticism, Karimov evicted U.S. troops from a military airbase and accused the West of meddling in his domestic affairs.
Some at Chorsu, a bustling open-air market where traders in traditional dress sell vegetables, clothes and even sheep, said they cared little about who was at the helm.
"We have food and bread," said one man called Rustam, whose father and brother are working in Russia. "As long as we get food and bread, we are going to be okay."