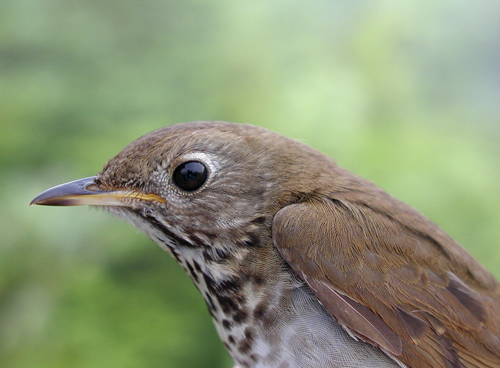 In the eyes of the U.S. government, the tiny Bicknell's thrush isn't endangered or threatened, but its numbers are dwindling and its habitat - breeding grounds in the mountaintops of the northeastern U.S. and Canada and wintering grounds in the Caribbean - is disappearing or being threatened by pollution, say a special group of experts.
"It's a canary in the coal mine for the higher elevations," said biologist Kent McFarland.
He's part of a newly formed group that gathers intensive data, including numbers and locations, on rare bird and other species in hopes of protecting them. The group is called the Vermont Center for Ecostudies.
While the center itself is new, the six scientists who make it up are known across the conservation world for work they have done for years. On October 1, they left the Vermont Institute for Natural Science - where some had worked for more than 20 years - and hung out their own shingle.
"It's the same group of people, for most of us it's just a matter of trying to remember they have a new name. In a way, that's a sign of how successful they've been. We know them as a team and as a group of individual scientists," said Ken Rosenberg, director of conservation science at the Cornell Laboratory of Ornithology in Ithaca, New York.
"They're a mean, lean highly talented group of researchers (who) are doing really important work in New England and internationally," said Rosenberg. "They have really built a reputation for themselves focusing on this flagship species of New England bird conservation, which is the Bicknell's thrush."
The center's focus is on more than just that one rare bird, however.
Center biologists work with volunteers throughout Vermont to monitor different species of birds and other wildlife, including insects, mammals and amphibians. The center manages a Web site, where people can record their bird sightings.
Close checks
Unlike some similar organizations, the scientists are known for their close checks on the birds, be it by following them from the top of Vermont's Mount Mansfield to the Sierre de Bahoruco in the Dominican Republican and adjacent areas of Haiti, or finding North American bobolinks in Bolivia, Argentina and Paraguay.
They've produced peer-reviewed scientific papers on such topics as "Ecology and Conservation of Bobolinks in Rice Production Regions of Bolivia" and "A Practical Model of Bicknell's Thrush Distribution in the Northeastern United States." The latter won a 2005 award from an ornithology publication.
Until September 28, the same work was done as a part of Vermont Institute for Natural Science. Center Director Chris Rimmer and VINS President John Dolan said the separation was amicable.
"In the past," Dolan said, "the biologists have been very focused and specialized in particular areas of ornithological research. We're interested in expanding the portfolio of environmental research."
Said Rimmer: "We just felt we would have more flexibility and the opportunity to pursue our agenda to conserve populations of wildlife and the habitat on which they depend, in the Northeast and throughout the hemisphere."
Chasing birds
The Center for Ecostudies must do its own fund raising.
"We feel we're more nimble and flexible," Rimmer said. "There are no constraints on what we can do."
The Bicknell thrush, Catharus bicknelli, breeds in dense balsam fir and red spruce forests at high elevations in the northeastern United States and adjacent areas of Canada.
Rimmer said he started focusing on the Bicknell's thrush after hearing a Canadian scientist talk about the bird during a 1991 meeting of the American Ornithologists' Union in Montreal.
"I was sitting there listening to this talk and I got to thinking ... here's a bird, we don't know much at all about," Rimmer said. "It's in our backyard. We know it lives on mountaintops, (yet) we know almost nothing about it, we don't know how many there are, we don't know where they are. Let's find out."
So Rimmer and others started following the bird. Now, he and the others do regular work on Mount Mansfield and on Stratton Mountain. They followed the bird to its wintering ground on Hispaniola, the island occupied by the Dominican Republic and Haiti.
In North America, they've discovered how the species, estimated to have a population of about 50,000, is threatened by acid rain and mercury pollution. They're working in the Dominican Republic to try to protect the wintering grounds.
Rosenberg tells a story that shows how intensively the scientists now with the Eco Center work - and also shows how they've sometimes created their own luck.
In 1995, researchers banded a Bicknell's thrush on Mount Mansfield. A couple of months later one of them was doing field work in the Dominican Republic.
"They went up into this mountain forest and set up nets and they caught a bird, and the first bird they caught was the bird that they had banded in Vermont," Rosenberg said. "That's almost unheard of. There was the same individual bird, thousands of kilometers away."