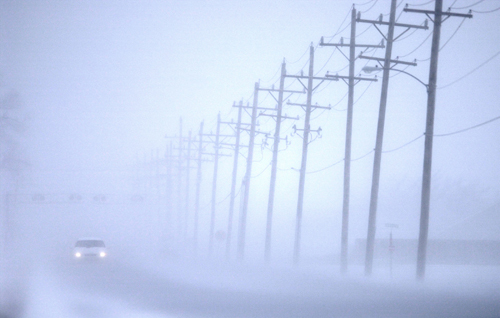 A snow storm packing strong winds caused flight delays and closed highways across the central United States, leaving at least five dead in road accidents, U.S. media reported yesterday.
The National Weather Service warned travel conditions had deteriorated at the weekend in Midwestern states stretching from northern Missouri to Michigan due to snow and high wind.
"A combination of heavy snow, strong winds and bitter windchills will make any form of travel dangerous if not impossible in some areas," the service said early yesterday in a warning for parts of Illinois, Iowa, Missouri, Wisconsin, Michigan and Minnesota.
The harsh weather posed a potential hazard for travellers ahead of the Christmas holiday tomorrow and for presidential candidates campaigning in the state of Iowa, which on January 3 holds the first contest for each party's nomination race.
A heavy winter storm warning was issued for upper Michigan near the U.S. border with Canada, where the weather service said "total snowfall through Sunday night will be 10 to 17 centimeters."
In Texas, blowing snow reduced visibility and caused a massive pile-up of cars and trucks on Saturday morning, leaving one dead and five others seriously injured, according to the Amarillo Globe-News.
The accident involved some 80 vehicles and shutdown Interstate 40 and another highway for hours, the paper reported.
Snowy and slippery roads triggered more than 300 car accidents in the Midwestern state of Minnesota, causing at least three deaths, the Minneapolis Star Tribune reported.
And wet roads caused a deadly accident in Missouri, with a 62-year-old man dying when his sport utility vehicle slid off a highway and struck a sign near Kansas City, the Kansas City Star reported.
The storm dropped a blanket of fog on Chicago's O'Hare International Airport, causing the cancellation of at least 170 flights and numerous delays on Saturday, the Chicago Tribune reported.
Despite the wave of cold weather, 2007 was likely to be one of the 10 warmest years on the US mainland since 1895 according to preliminary data, the National Weather Service said.