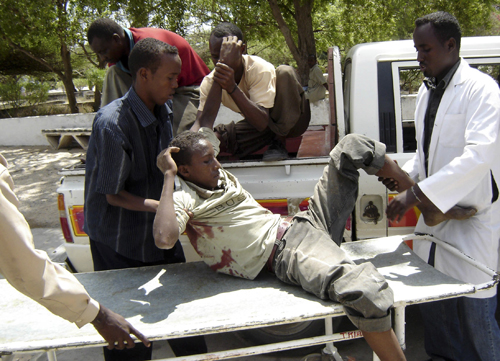 At least five Somalis were killed and eight wounded by crossfire during a series of attacks overnight on Ethiopian army bases in Mogadishu, residents and witnesses said yesterday.
Insurgents used rocket-propelled grenades and assault rifles to attack an Ethiopian base in a former factory in north Mogadishu, and the Ethiopian troops used tanks and artillery to repel the attack, residents said.
"My elder brother was hit by a stray mortar as he was sleeping and died on the spot," said Ali Dhagey.
Four other people were killed by stray mortars at various locations, said Hussein Osman who lived near the base, adding that the two sides exchanged heavy machine gun fire for at least two hours.
Yahye Ali, a resident in the nearby Huriwa neighborhood, said the latest attack was the heaviest fighting in the city for weeks.
Hospital staff said at least 8 people were wounded in the overnight fighting. Four of them were brought to Medina hospital early in the morning, while others were brought to Keysaney in the north of Mogadishu, the Somali capital.
"Some of the victims were in dangerous condition," said Faduma Hussein, a nurse at Medina hospital.
There was no news on casualties among the attackers but Mohamed Omar Habeb Dhere, the mayor of Mogadishu, told a local radio station that only one soldier from the government side was slightly injured.
Early yesterday, Somali government soldiers with their Ethiopian allies moved into the area in search of weapons as well as those suspected in the overnight attack.
Thousands of Somalis have been killed in fighting this year between Islamic insurgents and Ethiopian troops supporting shaky Somali government forces. The Islamists vowed to fight an Iraq-style insurgency after the Ethiopians dislodged them from power last December. They had taken control of the capital and much of southern Somalia.
The arid Horn of Africa nation has had no functioning government since 1991, when clan leaders overthrew dictator Mohamed Siad Barre and then turned on each other. The conflict between the U.N.-backed transitional government - which is seen by many Somalis as corrupt and ineffective - and the Islamists is complicated by a web of clan loyalties and the involvement of Ethiopia, which supports the government, and its archenemy Eritrea, which has offered support to Islamist forces.