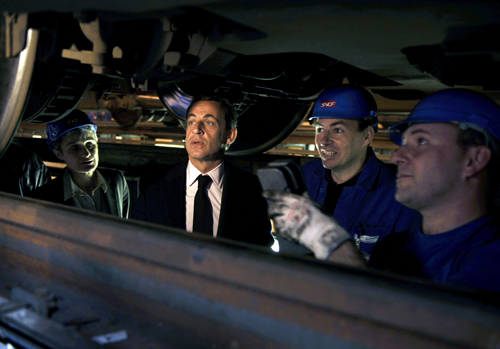 President Nicolas Sarkozy has sprinkled the parched French economy with dozens of little enticements since his election in May, all paving the way for an assault on the crux of France's woes: the labor laws.
France is in the "stone age of labor relations," says his budget minister, Eric Woerth. At negotiations with unions and employers last week, Sarkozy pledged to drag the country into the globalized age in the coming weeks and months.
In the World Economic Forum's Global Competitiveness Index, France ranks 18th out of 131 countries thanks to top-class infrastructure, transport links and business culture.
But it slipped from 15th last year, dragged down by red tape and its notoriously inflexible labor market, which ranked 129th.
Laws that make it difficult to fire workers even when a company is losing money discourage hiring, economists say. They also make France a less attractive place to invest in.
"The most important thing is reforming the labor market and getting the politics right to get this reform done," says Eric Chaney, chief European economist at Morgan Stanley and an adviser to the French finance ministry since 1997.
Sarkozy has introduced more flexibility into the labor market by effectively eliminating the former Socialist government's 35-hour work week. But that still leaves the hefty "Code du travail" of labor laws.
A new code is to take effect in May. But Laurence Parisot, head of the French employers' federation MEDEF, said it makes things worse. According to the Labor Ministry, the new code will have 3,652 clauses, compared with 1,891 currently.
The government's talks with employers and unions on a streamlined labor contract have yet to show much progress. Now Sarkozy has set a January 15 deadline, or he will push his own law through a parliament dominated by his fellow conservatives.
"My will to change is unshakable, because our country needs change, it is awaiting change with impatience, aware of the delay during past decades," Sarkozy told the meeting.
Sarkozy is in effect trying to rewrite a social contract set in stone during France's booming 1960s. Working in his favor are his dominance of parliament and a tail wind of public opinion that senses France must adapt to the new economic order or decline.
But he must tread carefully to assure a financial sector eager to surge forward, while placating labor unions that fear their rights are under attack.
Balancing values
Thus his 2008 budget introduced measures to control health spending and discourage early retirement, but also imposed a tax on stock options. To crack the 35-hour work week, he is encouraging employers and employees to negotiate their own deals to allow staff to work longer hours for more pay.
French society is traditionally wary of the free market, and Sarkozy speaks of his brand of capitalism as a "moral" one, which the French can embrace, says Morgan Stanley's Chaney.
"Slamming Wall Street and taxing stock options goes down well in France. It doesn't make a difference to companies - they know how to reward their workers," he said.
Sarkozy also wants to encourage the rich to remain in France through lower taxes. The top rate has been cut to 50 percent from 60 percent, while inheritance tax exemptions have been raised. An income tax credit has also been introduced for new mortgage-holders.
New tax breaks and financing initiatives have been introduced to encourage small companies, and businesses of all sizes are hailing plans to raise a tax credit for research and development to 30 percent from 10 percent.
Sarkozy is also moving to liberalize the price-fixing rules that govern the retail sector. To cut red tape for business, the government is thinking about introducing opt-outs to a law that requires all company documents to be available in French - a touchy subject in a society that feels its national language is under siege by English.
"There is a big effort today and that's to make the administration business-friendly," Stephane Richard, the top adviser to Finance Minister Christine Lagarde, told the Associated Press.
"It's true for taxes. It's true for labor laws. We have a big cultural delay in this domain."
Taken together, economists say the main impact of the measures has been to create a positive image among investors and a feel-good factor among consumers.
"French society is maturing," said Daniel Gronier, chairman of Toyo Ink Europe, a unit of the Japanese ink specialist. "The vision of the globalization phenomenon is becoming more realistic. The new president is saying out loud what a lot of people are thinking."
November resistance
One of the sharpest signs of resistance came in November, when public transport workers struck for nine days over Sarkozy's proposals to make rail workers work as many years as the rest of the population before retiring.
But that weapon may be blunted by a new law, taking effect January 1, which will require transport workers to guarantee a minimum service during strikes.
The outcome of the November strike was seen as a victory for Sarkozy's broader reform agenda. Commuters, often sympathetic to labor walkouts, quickly lost patience with train drivers whose privileges most see as unfair.
France's economy lagged the European average in 2007, expanding 1.9 percent compared to 2.6 percent for the 13-nation euro zone, according to the Organization for Economic Cooperation and Development. The U.S. economy grew 2.2 percent over the period.
One reason is French workers spend less time on the job - 35.9 hours per week compared to the EU average of 37.4.
Sarkozy is determined to boost growth by one percentage point, and this "obsession" may strengthen his resolve when the inevitable protests begin, said Patrick Artus, chief economist at Natixis and a government adviser.
"We are all in agreement that France needs to work more," he said.