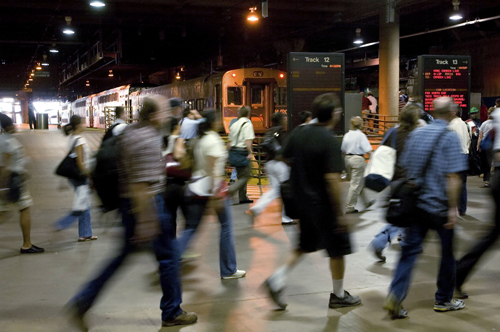 The Illinois cornfields whizzing past Mark Hardacre's view from the train's cafe car had nothing on the memorable splendor the Australian had already taken in on his trans-America adventure - the Pacific Ocean so vast and blue off California's coast. The emerald green of the Northwest forests. The majesty of the snowcapped Rockies.
But the cheery man from New South Wales was breathless about seeing a couple of things he had not seen in his three previous treks on Amtrak, the U.S. national passenger train service, over the past two decades - Americans seeming to outnumber tourists, and far fewer empty seats.
"It's good to see the Americans starting to use their trains, because if they don't use them they'll lose them," Hardacre, 53, said recently as Amtrak click-clacked its way from St. Louis to Chicago, just one leg of his monthlong sightseeing trip with his wife, Janice.
To Amtrak, it is proof that despite vexing challenges, it's on the right track.
The money-losing service, which relies heavily on government funding, says it is riding higher, illustrated by the hundreds of thousands of additional riders flocking to expanded routes in Illinois and California. Amtrak is chugging toward its fifth-straight record year for ridership nationwide, helped by high gasoline prices and congested highways and airports that seem to have encouraged people to keep their vehicles parked.
But Amtrak's headaches remain, and the biggest is funding. The service has never been out of the red since its launch in 1971, meaning it must rely on government handouts year after year.
In trying to hash out the federal budget for next year, Congress is weighing how much U.S. taxpayers should underwrite the passenger service. Amtrak has requested US$1.53 billion, nearly twice the amount the Bush administration wants to give it. In the past, Bush has proposed giving the service nothing.
A House appropriations committee recently agreed to boost Amtrak's federal funding to US$1.4 billion - a modest increase from the service's US$1.3 billion in government help - while a Senate panel has endorsed spending US$1.37 billion. But Bush has promised to veto any spending bills exceeding his budget requests, forcing Amtrak to slice service if the president makes good on his threat.
Lacking stable funding
Amtrak says the elusiveness of stable funding holds it back, leaving it unable to commit to infrastructure improvements, get past having to use using some equipment dating back half a century or add new rail cars it says it can easily fill on some routes.
The service also continues to be nagged by travel delays, mostly tied to having to share the tracks with freight haulers that own the rails and charge Amtrak a modest fee - US$90 million in the last fiscal year - for using them. With freight traffic soaring in recent years, Amtrak's on-time performance slid to an average of 68 percent last year, its worst showing since the 1970s.
"There's room for improvement, and we're looking for it," said Marc Magliari, an Amtrak spokesman.
Since taking over as Amtrak's president last September, Alex Kummant has stumped that the U.S. should embrace rail travel at a time of growing transportation needs and high oil prices. He said he's always wondered "why the Amtrak debate is so emotional and at times acrimonious."
The easy answer is money.
Heavy debts
Amtrak has more than US$3.3 billion in debt - largely tied to equipment leases. Amtrak's operating losses for 2005 topped US$550 million, and its struggles along certain routes continue: The iconic Sunset Limited train between New Orleans and Los Angeles, for instance, loses US$0.62 per passenger mile.
Amtrak officials are pinning their hopes on the bipartisan Passenger Rail Investment and Improvement Act, which would authorize US$3.3 billion for operating expenses and US$4.9 billion for capital improvements over the life of the bill, from 2008 to 2012.
"We can't keep asking Amtrak to operate like a business while we string the company along year to year," Senator Trent Lott, the Republican sponsoring the bill with Democratic Senator Frank Lautenberg, said in January.
The haggling over funding comes as Amtrak's ridership flourishes. Passengers for the fiscal year that ended last September numbered 24.3 million, setting a record for the fourth year in a row when comparing the same routes along the 21,000-mile system serving 500 stations in 46 states and Washington, D.C.
Between last October and March, Amtrak's riders numbered 14.3 million, up 5 percent over the previous year and sailing toward another record.
At least some of that growth might be tied to the investment by Illinois and 13 other states in short-distance corridors Amtrak otherwise would not offer, essentially paying for service where they see a need.
Last fall, Amtrak added two state-financed round-trips between St. Louis and Chicago and one apiece from Quincy and Carbondale to Chicago. Ridership spiked by 189,823 for the first two-thirds of this fiscal year, bringing the total passenger count in the state to 670,605.
To William Rechtenwald, it is a bargain. The journalism teacher at Southern Illinois University in Carbondale takes Amtrak several times a year to Chicago, finding the service comfortable enough, at roughly US$100 per round-trip cheaper than driving and tolls, and less hassle than maneuvering through congested freeways.
"I'm a fan of Amtrak," he said. "It's a much wiser choice than driving."
"Instead of turning people away, we now are able to put them on trains," said Magliari, the Amtrak spokesman. "We've always found around the country that frequency drives ridership."