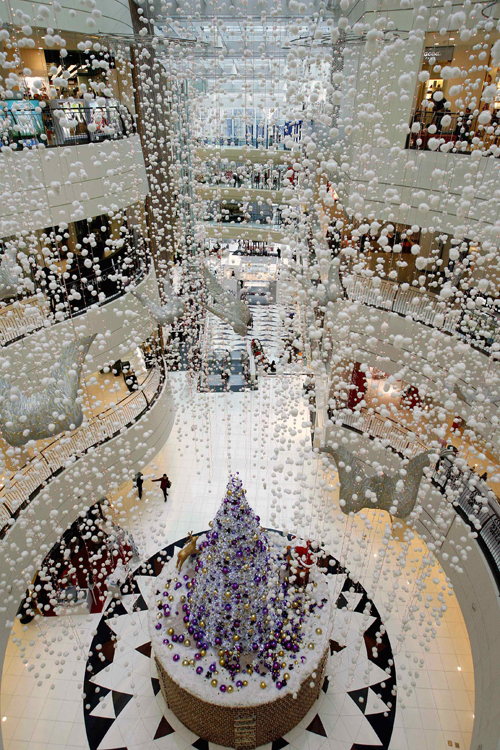 China's shopping malls in late December leave little doubt that the country has been smitten by Christmas, if not in quite the way devout Christians might hope.
Christmas has secured a spot on the Chinese calendar as a cherished excuse to buy, buy, buy. And while Christianity is indeed spreading in the officially atheist country, many shoppers have only a faint idea of the holiday's religious connection.
But their manner of celebration is sure to win the blessing of at least one group: economists.
"It's not really a real holiday," said Benny Zhang, 29, a computer programr outside a Beijing mall with his wife. "It's just a nice atmosphere for shopping and a chance to swap gifts with each other."
Economists long despaired that the Chinese propensity to save, not spend, was storing up trouble should China's exports falter and hurting the world economy because it was not buying enough from abroad.
Even as China has become wealthier, the savings culture has been reinforced by the dismantling of the social security system, which forced ordinary people to keep enough money on hand for education, medicine and old age.
But Christmas reveals that Chinese consumers, buoyed by fast rising incomes, have now burst on the scene with a fervor for shopping that someday might rival their American counterparts.
"It is hard to get away from cultural norms," said Anna Kalifa, head of research in Beijing for Jones Lang LaSalle, a real estate management firm.
"What is also true is there is a new generation that is coming along and really changing things. They value quality and they want to spend money," she said.
Seven of the world's 10 biggest shopping malls will be in China by 2010, Kalifa said.
Hard numbers show why. Retail sales rose 18.8 percent in November from a year earlier, marking the fastest growth since 1999, the National Bureau of Statistics reported this month.
It's Christmas - sort of
Bedecked in trees and bunting, with carols piped through their speakers, Chinese malls are thronged by shoppers at Christmas and look much like ones anywhere else in the world. The difference lies just below the surface.
Wang Lijun knows her Santa Claus hat and coat are supposed to lure customers to the buffet house in the Beijing mall where she works but beyond that she is confused.
"The boss makes us wear these," the restaurant hostess, 25, said. "I have no idea what they mean."
But the hat and coat do the trick. Business is brisk in the restaurant behind Wang as waiters clad in similar Santa Claus outfits scurry among the tables, dodging the poinsettia and fake gifts scattered about the floor.
That the gift-buying element of Christmas has spread faster than the religious rituals of the holiday is seen by some Chinese Christians as more an opportunity than a worry.
"It's nothing to be disappointed about," Liu Bainian, vice-president of the China Patriotic Catholic Association, said. "It's good for understanding. From our perspective, it's good for spreading the idea of Christmas."
Liu, who often echoes government opinion on church affairs, said Chinese shouldn't get caught up in the commercialism and should instead view the Christmas message as one of world peace much like the "harmonious society" promoted by authorities.
About 40 million Chinese - or 3 to 4 percent of the 1.3 billion population - are Christian, according to the U.S. Central Intelligence Agency.
But precise estimates are hard to come by, as devotees are divided between "above ground" churches approved by the ruling Communist Party and "underground" churches, wary of government ties, that have grown in popularity.
Shopping spree
So long as shopping outpaces church-going, Christmas will cheer the hearts of government officials who have been trying to boost consumption to lessen the economy's reliance on exports.
That looks a feasible aim thanks to the wealth piling up in Chinese pockets, as people cash in on soaring real estate prices and the gains racked up by the stock market.
"There is more impulse buying, even in the luxury sector," said Mavis Hui, a Chinese retail sector analyst at DBS Vickers in Hong Kong.
Analysts who crunched the November retail data found that purchases of high-end goods shot up the fastest, for example, a 59.7 percent increase in spending on furniture from a year ago and 33.4 percent for cosmetics.