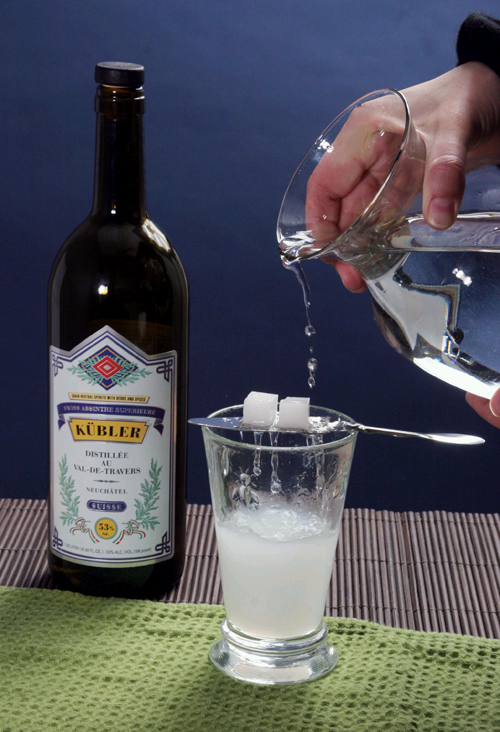 Swirl the glass of cloudy liquid, and the delicate aroma of anise and herbs rises above the rim. The first cool sip of absinthe is refreshing, like an herbal spa treatment.
It seems benign enough, especially when compared to the searing chemical-tasting concoctions of Red Bull and vodka served in bars today. But the lore of absinthe - that it has driven people to hedonism, violence, even madness - has long made it a rebel's drink.
Known as "the green fairy" or "green muse," it was a favorite drink of Oscar Wilde, Pablo Picasso, Ernest Hemingway and is said to be the reason why Van Gogh cut off his own ear.
Absinthe is back on U.S. liquor store shelves thanks to a change in legislation this year by the Alcohol and Tobacco Tax and Trade Bureau, and it's selling fast. Ed Ledger of Ledger's Liquors in Berkeley, California, says his stock of Lucid absinthe, a 62 percent alcohol French brand which costs more than US$65 per bottle, sold out right away.
"It's a common drink, like a digestivo," he says of the verdant tipple. "But it's showing up in all sorts of new cocktails. All the retro cocktails are coming up again."
Ledger still has Kubler, a Swiss absinthe made from an 1863 recipe, and Absente brands in stock, and they're selling well too. He's particularly looking forward to selling the first legal U.S.-distilled absinthe from St. George's spirits in Alameda, California. St. George's spirits, which also distills the popular Hangar One vodka, will sell their absinthe for US$75 a bottle. It went on sale to the public Friday.
Absinthe typically contains extracts from several herbs, including anise, fennel, hyssop, angelica, mint, coriander and the big one: wormwood.
While absinthe's high alcohol content (from about 50 to 70 percent) might have something to do with its reputation for making drinkers behave erratically, it's the extract of the herb grande wormwood - or Artemisia absinthium - that has long been blamed for causing hallucinations and psychotic behavior.
Used for centuries as a digestive aid, Artemisia absinthium oil contains the chemical compound alpha-thujone (as do many other herbs including sage and tarragon), which in large amounts has been shown to cause convulsions in laboratory animals. The extract also adds a distinctive bitter edge to absinthe, something that purists say is critical for a good product.
Concern over thujone levels in absinthe is what led to the 1912 ban of the drink in the United States. Later research has shown that levels of thujone in traditional absinthe recipes are often much lower than was originally thought.
However, in a 2000 study by U.C. Berkeley researchers Karin Hold, Nilantha Sirisoma, Tomoko Ikeda, Toshio Narahashi and John Casida, it was discovered that alpha-thujone affects a brain receptor that regulates excitation, re-opening the idea that absinthe has calculable effects on the brain. So is drinking absinthe dangerous? According to the Berkeley study, current low levels of thujone in absinthe are of much less toxicological concern than the ethanol content.
"It depends strictly on the concentration of active ingredients," said Casida in a phone interview.
This year the TTB approved the use of the term "absinthe" on the labels of distilled spirits, as long as they are "thujone-free." Based on standards set by the Food and Drug Administration, the TTB considers a product to be "thujone-free" if it contains less than 10 parts per million of thujone. So while the absinthe on local store shelves are technically "thujone-free," there is still some of the compound present and, according to the Berkeley study, the upper level of the 10 parts per million U.S. standard, could have a discernable effect on the brain.
Will this stop people from trying absinthe? Ledger doubts it.
"People are looking for that Van Gogh experience, with the hallucinations and the high," he says. "I can't say it won't happen. Some of my customers say it does make you feel different, but it could just be all the herbs."