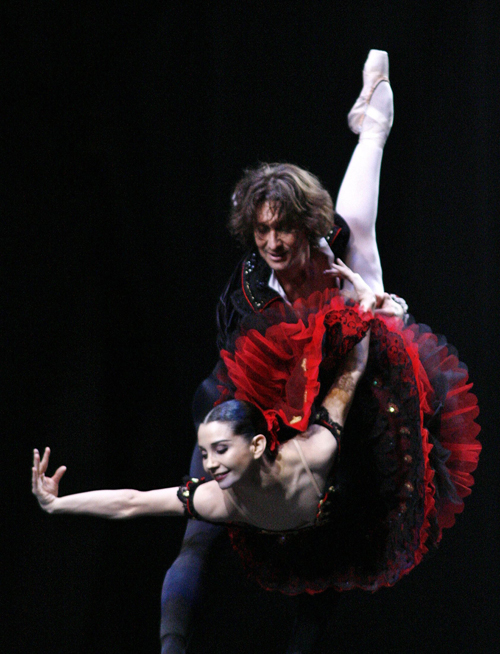 Argentine ballet great Julio Bocca danced into retirement Saturday before tens of thousands of cheering fans, ending a brilliant quarter-century run on the world's most famous stages.
For his last dance, the 40-year-old dancer chose to play one of the widest boulevards in the world, performing on an open-air stage in Buenos Aires as he reprised famed roles from Don Quijote and the Black Swan along with samba, jazz and tango numbers.
Amid bursting fireworks shot high over the stone spire called the Obelisk, the man dubbed the Baryshnikov of Latin America bid farewell to professional dancing as he performed to Argentine pop singer Diego Torres singing Frank Sinatra's trademark tune "My Way."
Chants of "Ole! Ole! Julio!" rose in soccer-style cheers, giving a festive air to the huge outdoor performance that saw crowds stretching 12 city blocks on the capital's 9 de Julio Boulevard.
Bocca, who rose from Buenos Aires working class roots to dance a style of ballet that connected with the masses, was joined by his dance partner of 18 years, Eleonora Cassano, and accompanied on songs by Mercedes Sosa, Torres and other artists.
The crowd jamming the avenue exceeded the size of two performances Bocca gave at Argentine soccer stadiums in the last two decades. Organizers estimated Saturday's crowd at 300,000, although there were no independent counts of the number of people attending.
With impassioned leaps and stunning pirouettes, Bocca enjoyed a 20-year run at the American Ballet Theater where he danced his last "Manon" in 2006 to an ovation lasting more than 25 minutes. His bold Ballet Argentino troupe also has thrilled audiences worldwide and performed with him Saturday.
Bocca, after a yearlong "Goodbye Tour" of 11 countries that began last January, had planned his send-off for months - saying it was time to end a professional career that far outlasted that of most male ballet dancers who called it quits in their late 20s or 30s.
"You reach a certain age when it becomes a lot harder," he said in an interview with The Associated Press.
On Saturday night, he wept with joy and blew kisses to adoring fans as friends doused him with champagne. Red, white and green fireworks crackled overhead under a full moon and cloudless sky.
"This is just incredible! The crowd goes on for block after block," said fan Franco Fubini, craning his neck to watch on one of five big screens set up blocks away from the stage.
Audience member Alejandra Diaz, 47, said she remembered when Bocca, at age 18, won the gold medal at the International Ballet Competition in Moscow in 1985.
Mikhail Baryshnikov, the 1969 winner, was then artistic director at the American Ballet Theater, and invited him to join - launching Bocca's storied career.
"He enthralled the whole world back then and still does today," Diaz said, as Bocca danced in white shirt and black tights to "My Way" - spinning rapidly as Torres sang the number. Later Bocca stripped off his shirt for a jazz number.
After 27 years of dancing, Bocca said he now looks forward to retirement and plans to continuing directing his Ballet Argentino troupe he founded in 1990.