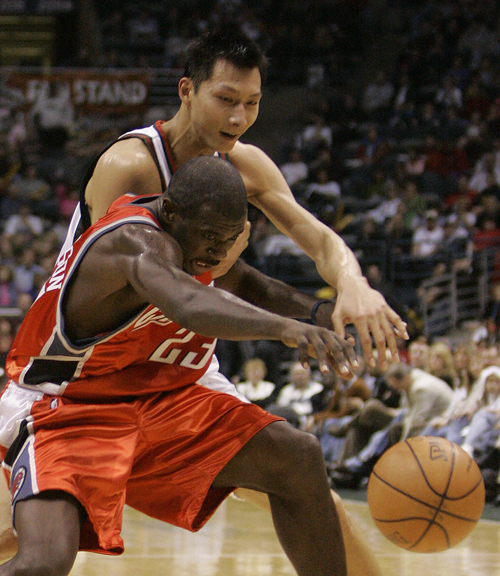 Say this about the Los Angeles Clippers, who have been decimated by injuries and frustrated by mounting losses: They still display the will to compete.
Yet another injury struck the Clippers on Saturday when forward Tim Thomas suffered a sprained left knee Saturday. The team's leading scorer, Corey Maggette, already was out because of a sore left knee.
Easy pickings, you would think for the defending world champion San Antonio Spurs? Not hardly.
Although the Clippers never led and trailed by 24 points, the Spurs' 99-90 victory at AT&T Center was not sealed until the final minute. A driving layup by Clippers guard Dan Dickau brought them to a 92-86 deficit with 1:40 remaining.
But on San Antonio's next possession, Tim Duncan scored with 1:17 remaining on an offensive possession that was kept alive by a pair of rebounds.
That gave the Spurs enough breathing space to coast in and break their own two-game losing skid. San Antonio's fortunes were aided by the return of guard Tony Parker, who had missed the previous four games because of a sprained left ankle. He scored 18 points.
The Clippers outscored the Spurs by 12 points in the second half but could not overcome the onslaught by San Antonio in the second quarter, when Duncan scored 10 of his game-high 34 points.
But Duncan had to stay on the floor until the end as the Clippers kept coming, behind the scoring of rookie Al Thornton, who finished with a season-high 25 points, and center Chris Kaman, who overcame a horrid first-half performance to finish with 20 points and 10 rebounds.
Kaman, who was 1 of 9 from the field in the first half and hit 7 of his 8 field-goal tries in the second on the way to his 12th consecutive double-double. Cuttino Mobley scored 16 points.
"I was proud of our team tonight," Clippers coach Mike Dunleavy said. "I thought in the second half our guys came out and really competed.
"After losing two of our guys to injuries, a lot of (teams) would have just folded. But we had a great second half, which got us back into contention."
But as pleasing as the effort was to see, it still resulted in the Clippers' fourth consecutive loss and 13th in the past 16 games. The Clippers limp figuratively and literally into the Christmas break eight games below .500.
"We're a beat up bunch of guys now," guard Sam Cassell said. "Any rest we get is going to be positive."
The Clippers began the game with 10 players in uniform. That included Cassell, who had not played in nearly a month because of a strained left calf muscle.
Sparkling Yi
Chinese rookie Yi Jianlian displayed an array of offensive weapons to score a career-high 29 points Saturday in the Milwaukee Bucks' 103-99 victory over the Charlotte Bobcats.
Yi, the sixth overall selection in the National Basketball Association draft last June, made his first 12 shots and finished 14-of-17 from the floor with 10 rebounds.
Yi scored 10 points in the third quarter as the Bucks built on their 58-47 halftime lead to take a 85-71 advantage after three quarters.
Charlotte narrowed the gap to 97-89 on Raymond Felton's jumper with 4:44 left in the game, but Yi promptly answered with a jumper of his own seconds later.
Yi's performance showed vast improvement from his first effort against the Bobcats.
In that, his second NBA outing, Yi scored just two points on 1-of-6 shooting in a 102-99 loss at Charlotte.
Michael Redd added 27 points and Mo Williams had 22 as the Bucks improved to 9-3 at home.
Meanwhile, Jason Richardson scored 30 and Emeka Okafor and Felton scored 17 apiece for Charlotte, who trailed the entire game.
The Bobcats had to battle just to get to the contest in the face of winter storms wreaking havoc in Canada and in the Great Lakes and northeastern regions of the United States.
Dense fog closed Milwaukee's airport, keeping the Bobcats in Charlotte following their victory over the New York Knicks on Friday.
The team finally left Charlotte early Saturday and headed for Madison, Wisconsin.
Madison's airport was also closed, so the plane flew to Minneapolis-St. Paul International Airport for fuel.
The team then departed for Green Bay, about 100 miles north of Milwaukee, but that airport was closed while they were in the air.
The team eventually landed at Chicago's Midway Airport and took a charter bus to Milwaukee, arriving an hour before the scheduled tip-off.
In other NBA action: Indiana 93, Washington 85; Miami 104, Utah 102; New Jersey 100, Golden State 95; Philadelphia 99, Memphis 97; New Orleans 110, Minnesota 76; Houston 116, Chicago 98; Phoenix 122, Toronto 103.