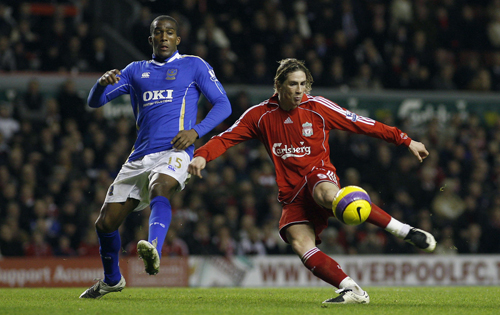 Liverpool manager Rafa Benitez hailed the impact of Fernando Torres after the Spanish striker's two goals helped his side make a timely return to winning ways.
Torres took his tally to six goals in six games as Benitez's team bounced back from successive league defeats to destroy Portsmouth 4-1 at Anfield on Saturday.
He has now scored 14 times, including eight in the top flight, since joining from Atletico Madrid in the summer for a club record 20 million pounds fee.
Benitez said he was delighted with the way Torres had adapted to the pace of the Premier League and believes there is plenty more still to come from the player.
"Fernando has a very good mentality," said Benitez after his side's victory lifted the pressure following Liverpool's midweek League Cup exit to Chelsea.
"He has no problem with the physical side of the Premier League. He used his pace and ability well."
Having fielded an under-strength side for the League Cup quarterfinal defeat to Chelsea, Benitez wheeled out his big guns against Portsmouth, a game Liverpool dared not lose.
Benitez desperately required a win to brighten up his fourth Christmas at Anfield after back-to-back league defeats had left the club trailing leader Arsenal by 10 points.
Yossi Benayoun fired Liverpool ahead with a delightful volley - his first league goal at Anfield since a 5-million-pound move from West Ham - before French defender Sylvain Distin put past his own keeper to double Liverpool's lead inside the opening 20 minutes.
Portsmouth has not won at Anfield since 1951 but arrived at Merseyside in a confident mood, having won its previous six away games.
Zimbabwe striker Benjani Mwaruwari gave the side hope of salvaging a point with his ninth goal of the campaign soon after halftime before Torres took over and put the game out of reach with two late goals.
Despite playing catch-up in the title race, Benitez remains confident Liverpool can still claw back Arsenal, and saluted the character of his players for bouncing back in convincing fashion.
They remain 10 points behind Arsenal but face bottom club Derby on Boxing Day.
"I thought it was a great performance for the team," added Benitez. "We needed to score the third goal and finish the game. Talking about the title is too early.
"My idea is one game at a time and then see if we are in the top four at the end of the season."
Portsmouth manager Harry Redknapp admitted Torres was the difference between the two sides.
"We got back to 2-1 and then conceded two terrible goals. It's poor defending," said Redknapp. "We started poorly. Liverpool can beat anyone on their day."
Portsmouth entertains Arsenal on Boxing Day but defender Glen Johnson is a major doubt after suffering a knee injury.
"Johnson has done his knee. It doesn't look to clever," added Redknapp.
In other games, Manchester City remained in the top four, just ahead of Liverpool, after a 1-1 draw at Aston Villa. Norwegian striker John Carew earned a point for the home side after Rolando Bianchi had given City the lead after only four minutes.
"He's settling in better and better," City boss Sven-Goran Eriksson said of Bianchi, who has begun to pay back some of the 8.8-million-pound he cost the club with three goals in his last four games.
At the other end of the table, Bolton's revival under Gary Megson gathered pace with a 3-0 home win over Birmingham, courtesy of a first-half strike from El Hadji Diouf and a late double from Nicolas Anelka.