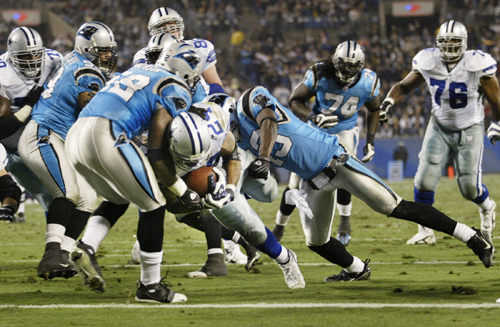 The Carolina Panthers did nothing to derail the Dallas Cowboys' drive to earn home-field advantage in the playoffs.
But the Panthers did become the third consecutive team to chip away at the confidence the Cowboys carried into December.
The Cowboys still feel good about themselves. How can they not at 13-2? But the euphoria that followed their big victory over Green Bay has slowly slipped away.
Sure, the Cowboys are 2-1 in December. But let's face it. None of the teams the Cowboys beat during the last 13 days will make the playoffs. Detroit hammered the Cowboys' run defense, and the last two opponents have quieted their offense.
Philadelphia's defense - not Jessica Simpson - tormented Tony Romo into his worst day as a professional and held the Cowboys to six points. Romo was much better Saturday, but he still led his team to only 20 points.
If you're keeping track, that means the Cowboys' two lowest-scoring games of the season have come in the last six days. The Panthers did this with a defense that was without star defensive end Julius Peppers for the first time in 78 games. His replacement, rookie Charles Johnson, was injured in the third quarter and didn't return.
The Panthers bend-but-don't-break approach held the Cowboys without a touchdown over the final 2 1/2 quarters.
The bottom line: A Cowboys team held to less than 30 points only four times in the first three months of the season has been held to less than 30 points in each of the last three games.
"That team was a little better than us tonight, but we gave a great effort and played with great heart," Carolina coach John Fox said.
The Cowboys were a little better than a 6-9 team going nowhere? You can understand if the Cowboys don't take much comfort in that statement.
And what about the Cowboys defense? It did hold a team to 10 points for the second consecutive game after it was humbled by the Lions.
But it came against an undrafted rookie quarterback making only his second start. And the secondary, thinned by the loss of two safeties, had no defense for Steve Smith.
Smith is one of the league's most explosive players. But with Carolina's musical chairs approach to quarterback this season, he hasn't been much of a factor.
Smith had gone two months without a touchdown entering Saturday's game. He had averaged only 46 yards receiving in his previous seven games.
But on this night, he burned the Cowboys' secondary - most noticeably Terence Newman and Jacques Reeves - with nine catches for 137 yards and a touchdown. It was his best game since he had 153 yards receiving and three touchdowns against Houston in Week 2.
"Dallas, the way their front seven is so big and fast, it's hard to get in between the tackles," said Matt Moore, the quarterback who was among the Cowboys' final cuts at the end of the preseason. "For us to stretch the field and get (Smith) the ball was crucial. That was part of our game plan, to get him going.
"Anytime you get him the ball, good things are going to happen."
Moore had the plays taped to his forearm, and the Panthers were careful not to ask him to do too much. He only had one interception, but the Cowboys' pressure affected him late.
"He had his moments again," Fox said. "He had some good deep-ball throws and his decision-making was good for the most part."