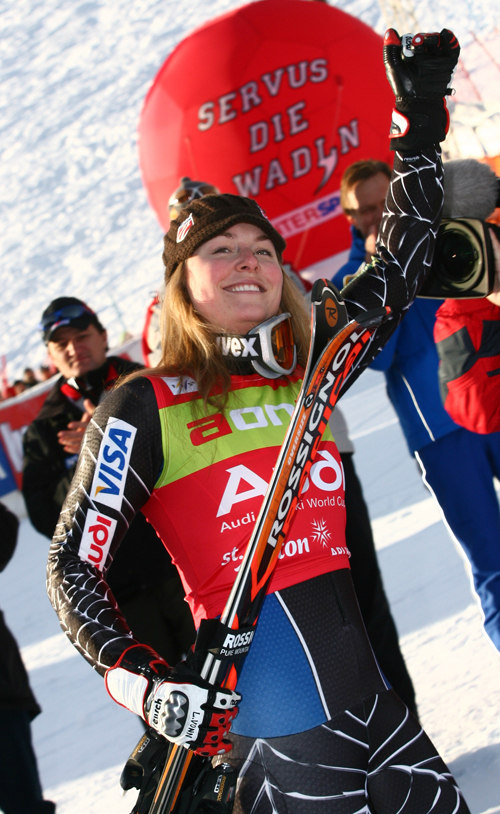 American Lindsey Vonn said she would suppress thoughts of winning the women's World Cup title after taking the lead in the overall standings on Saturday.
Vonn, who raced as Lindsey Kildow before getting married in September, could become the first American in 24 years to win the title.
But after leaping to the top of the rankings with back-to-back victories in the Austrian resort of St. Anton, she said she could only achieve the feat by not thinking about it too much.
"It was a childhood dream of mine to win the overall title," Vonn told Reuters. "But in the past, the more I have thought about the overall, the worse I have skied.
"So I'll be trying not to think about it the best I can - although it does look pretty good right now!"
Vonn's double victory in Friday's downhill and Saturday's super-combined event lifted her 55 points clear of Austrian defending overall champion Nicole Hosp.
While Hosp and fellow Austrian rival Marlies Schild are emerging as true all-rounders, Vonn knows that her main strength still lies in the speed events of downhill and super-G - making her bid for the overall crown that much harder.
"I think Nikki (Hosp) is still the one to beat as she's so strong in all four disciplines," Vonn said.
"But I think if I'm consistent and strong in my two best disciplines and can at least get some points in the giant slalom then I have a chance.
Impressive form
"When it comes to the overall though, anyone can go out at any stage so you can't really worry about it until it's over."
Vonn's early season form has been particularly impressive following the disruption caused to her summer training program by a knee operation in May.
"I worked really hard over the summer though and did a lot of rehab," she said.
"I'm pretty certain I didn't lose anything from my injury because I think I'm the strongest I've ever been right now."
With only a third of the season gone, and 24 races still remaining, Vonn said she planned to distract herself from thoughts of the overall title by concentrating on success in the individual disciplines.
She is already looking good for winning two of the crystal globes awarded to the discipline champions at the end of the season.
In the downhill, she has a 106-point lead over Canada's Britt Janyk. Her chances are also good in the super-combined, with Saturday's race the first of only three scheduled for the women this season.
With Hosp and Schild likely to take points off each other in the technical disciplines, continued good form by Vonn in the speed events could see her follow in the tracks of Tamara McKinney - the last American woman to win the overall, back in 1983.
"It's been a long, long time," Vonn acknowledged.
"It would be pretty amazing, it would be insane. But I really cannot focus on that. Hopefully if the cards fall the right way though I can end the season winning some crystal."