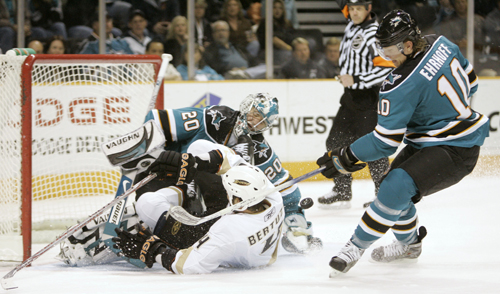 Anyone who might have thought a two-hour, closed-door meeting would get the Sharks out of their funk got a rude awakening Saturday night.
The Sharks lost, 5-2, to the Anaheim Ducks at HP Pavilion, their fourth home game in a row without a victory and their second loss to their Southern California rivals over that stretch.
"It's not always the instant answer, but those things that we said in the meeting had to be said and now it's a matter of doing things on the ice," Sharks captain Patrick Marleau said. "Just because you had a meeting and say stuff, doesn't mean you're going to win games. But it's part of the process that needed to be done."
Other players made it clear that Saturday's game was more of a continuation of things that led to the Friday session initiated by General Manager Doug Wilson than any kind of a new beginning.
"Guys are nervous. Guys are grabbing the sticks too much," defenseman Craig Rivet said. "They're putting pressure on themselves to do too much and sometimes that backfires."
The Ducks built a 3-0 lead midway through the second period on goals by Chris Pronger, Corey Perry and Chris Kunitz. Though Anaheim benefited from a favorable bounce in the crease on Perry's goal and a blunder by defenseman Christian Ehrhoff on Kunitz's, the Sharks were unable to mount any sustained offensive threats to that point.
The Sharks, who entered the game only 1 of 22 on the power play over the three previous games, continued to struggle with the man advantage in the first two periods.
Sharks Coach Ron Wilson, who didn't sit in on Friday's meeting, said it was hard to know what to expect from players because he didn't hear what was said. But he cited little things that didn't get done in explaining the loss. "We don't get some pucks out," he said. "We see somebody coming hard and we just pass on our problem to somebody else and that's not what you do. You take a hit to make a play."
In other NHL action: St. Louis 4, Boston 1; Chicago 4, Ottawa 3, OT; Atlanta 3, Montreal 2, SO; Toronto 2, Florida 1, OT; Buffalo 6, Philadelphia 5, SO; NY Islanders 3, Washington 2, OT; Carolina 4, Tampa Bay 1; Detroit 4, Minnesota 1; Nashville 4, Los Angeles 3; Vancouver 2, Phoenix 1, SO.