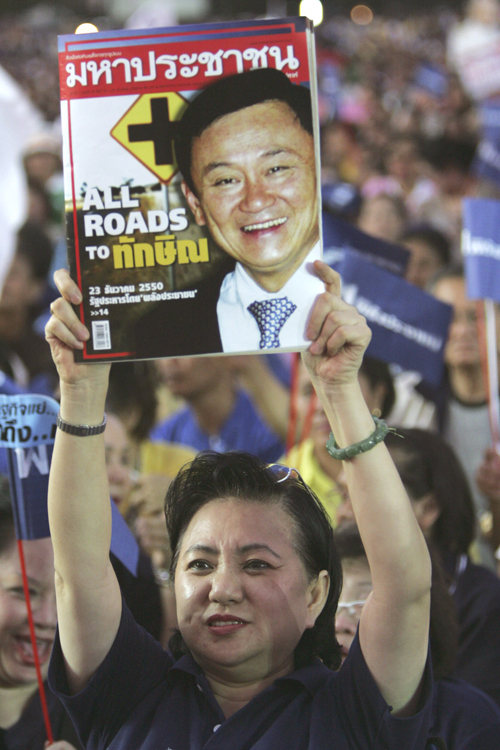 Loyalists of Thaksin Shinawatra, poised to emerge as victors in today's general election, say the former prime minister will return from exile early next year, sparking fears of another period of political turbulence in Thailand.
Chalerm Yoobamrung, a parliamentary candidate of the People's Power Party, said at a campaign rally Friday night that Thaksin would come home from his self-imposed exile in London on Valentine's Day, February 14.
But party leader Samak Sundaravej, a top candidate for the next prime minister, later told AP Television News his colleague may have been joking about the exact date, adding Thaksin would return about a month after the elections.
Ousted by a bloodless military coup 15 months ago, Thaksin faces a slew of corruption charges but is still so popular among the rural masses that he holds the key to today's balloting, which pits Samak's grouping against the Democrat Party headed by Abhisit Vejajjiva.
The movie-star handsome 43-year-old Abhisit, born in England and educated at Eton and Oxford, is regarded as an intelligent, honest politician but lacking the common touch needed to connect with the mass electorate - something mastered by Thaksin, and to some extent by Samak.
Abhisit said yesterday he would allow Thaksin, who is visiting Hong Kong, to return "to face charges here so justice will prevail."
Polls show the People's Power, considered a reincarnation of Thaksin's outlawed Thai Rak Thai Party, will probably garner the most votes but fall short of an outright majority. A coalition government of the Democrats, the country's oldest party, and smaller parties is seen as a possible outcome.
Barring last-minute disqualifications, about 5,000 candidates from 39 political parties will be contending for 480 seats in parliament's lower house.
Irrespective of today's results even the prospect of Thaksin's return is sure to create further political polarization and raise fears of another coup by the powerful military.
Last week, the country's military-installed parliament approved a controversial internal security law that critics warned will allow the military to maintain a grip on power even after the election.
The new law will allow the Internal Security Operations Command, or ISOC, to order curfews, restrict freedom of movement and curb the powers of government officials in situations deemed harmful to national security.
Despite the sharp political divisions, national deputy police chief Gen. Wichien Photphosri told The Associated Press that no "unwanted incidents" are expected today. Nonetheless, he said some 200,000 police and soldiers will be deployed nationwide to ensure security.
The polls, scheduled to open 8 a.m. (Thailand time) today, are to be guarded by some 4,000 troops, most of them in southern Thailand where a Muslim insurgency has taken the lives of more than 2,600 people, said ISOC spokesman Colonel Thanathip Sawangsaeng.
On the eve of the election, monitors are also on the look out for vote-buying, reportedly rampant during the election campaign. The night before elections is popularly called the "night of the howling dogs," as canvassers knock on doors to distribute last-minute cash-for-votes in rural areas.
The election, supposed to restore democracy after the coup, comes after almost two years of intense political instability that began with popular demonstrations demanding that Thaksin step down because of alleged corruption and abuse of power. The protest culminated in the coup.
In Washington, the White House deputy press secretary Tony Fratto said Friday: "The United States eagerly awaits the return of democracy to Thailand so we may resume our close and abiding relationship with this important ally."
Thaksin, whose Thai Rak Thai took power in 2001, was returned to government in 2005 by a landslide victory that gave it an unprecedented absolute parliamentary majority.
After the coup, Thaksin, a 58-year-old billionaire, was legally barred from office for five years and charged with a barrage of corruption-related crimes.
For the first few months after he was toppled, he was warned by the military to stay away on grounds that he could endanger public stability. As legal cases proceeded against him, he found it in his own self-interest to keep away.
Thaksin has repeatedly said he has retired from politics.
In recent months, he has said he could not find justice until there is an elected government, and would return only after polls were held.
Abhisit characterized today's election as "a vote for a real prime minister or a proxy prime minister."
"I will be the real prime minister responsible for what I say but if you vote for Samak he will not be responsible for what he says," Abhisit told a rally. "He will have to wait for the dictates of his master in London."
Samak, an acerbic, right-wing veteran politician, in turn has criticized Abhisit as an "unripe mango," too inexperienced to run the country. The 72-year-old firebrand has been accused of malfeasance related to two contracts during his term as Bangkok's mayor, as well as allegedly stirring up mobs to massacre left-wing students in 1976.