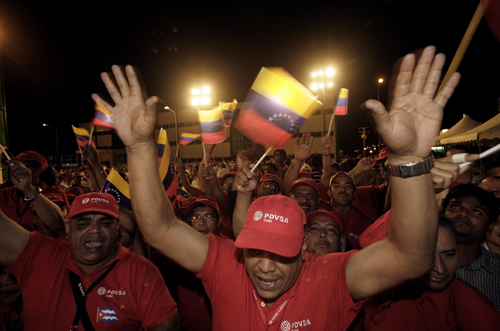 Venezuelan President Hugo Chavez proposed on Friday extending a barter scheme used by Cuba to other Caribbean and Central American nations to help them pay for oil supplies with products and services.
At a summit of his growing regional energy alliance, Petrocaribe, the leftist firebrand attacked the United States and other rich consumer nations for squandering their unfair share of world resources.
"In spite of the Yankees, our oil and gas will always be at the service, first of Venezuela, and at the same time of our brother nations of Latin American and the Caribbean," he said.
"We have begun to create a new geopolitics of oil that is not at the service of the interests of imperialism and big capitalists," Chavez said in a speech.
Chavez, the fiercest antagonist of the United States in the region despite being a major U.S. oil supplier, opened a revamped Soviet-era refinery in Cienfuegos, Cuba that will supply diesel, gasoline and jet fuel to members of Petrocaribe.
The Petrocaribe alliance, which has bolstered Chavez's regional influence since it started in 2005, grew to 17 countries on Friday with the entry of Honduras, a traditional U.S. ally. Guatemala's president-elect also wants to join.
Chavez said the debts of Petrocaribe members to Venezuela has reached US$1.16 billion in little more than a year of preferentially financed supplies, and is estimated to rise to US$4.6 billion by 2010.
He proposed debts be offset by local products and services, following the example of Cuba, which has sent 20,000 doctors and teachers to Venezuela in exchange for crude and refined products now estimated to value US$3 billion a year.
"We propose adding to the financed portion of the oil bill a method of payment that includes the supply of a series of local products and services," he said.
Venezuelan Energy and Petroleum Minister Rafael Ramirez said the barter scheme had worked very well for Venezuela. "It has allowed us to lift up our health system and education," Ramirez told reporters.
Petrocaribe allows members to defer payment on 40 percent of their Venezuelan oil bill for up to 25 years, with interest of only 1 percent.
Critics say the deal supplies oil at market prices and is increasing the indebtedness of small Caribbean states.