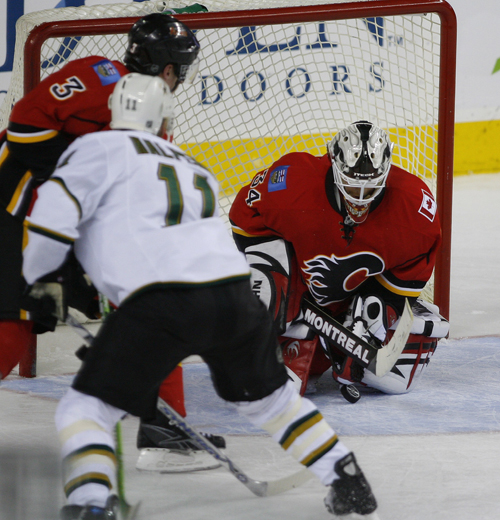 Calgary forward Craig Conroy came up with one of the best lines of the year after he retrieved a puck from the net Sunday in St. Louis and handed it to coach Mike Keenan in honor of his 600th win.
"It was nice to get it over with tonight, especially in St. Louis, where he made a stop," Conroy said. "He's made a lot of stops, actually."
That sums up Keenan's career perfectly. He has been good enough to be hired by eight teams and to win 600 games. But, he has also been controversial enough to leave seven of those teams.
That is the legacy of "Iron Mike," and one that he can apparently live with.
"It means a lot of owners and a lot of managers had a lot of confidence in me," said Keenan, who was hired this year to guide the Flames. "That gives you longevity. . . . It takes a lot of good fortune to be in this league for that long."
For all the stops, there has been only one Stanley Cup. He ended the New York Rangers' fabled drought in one season (1993-94), was rumored to be bound for Detroit before the Finals even ended and left for St. Louis almost before the streets of Manhattan were swept clean after the victory parade.
His most recent hire is an interesting one, as many thought he might be done after short stints in Boston and Florida. But Flames general manager Darryl Sutter saw something in Keenan, his old friend from their days together in Chicago.
Sutter saw a coach who might be able to take a veteran Calgary team and whip it into playoff shape.
Keenan was brought in, and immediately the team started to underachieve. The coach who has been notorious for riding players privately and publicly started in on captain Jarome Iginla and goalie Miikka Kiprusoff. Many in Calgary feared the whole team might just fall to pieces under Keenan's tight rein.
Funny turnaround
But a funny thing happened last week. The Flames went on a six-game road trip and won all six games. Only three other teams in NHL history had accomplished that feat. The Flames now believe they might be something just a little bit special.
"It feels awesome," Iginla told reporters. "It's one of the best, most enjoyable stretches I've been on since being here. It's been a great vibe going."
Keenan, always the pragmatist, was a little less excited.
"We got ourselves out of a hole; that's what this road trip did for us," he said.
But he acknowledges that he has softened some and appreciates the game a little more. He appreciates the opportunities. When he won his 600th game, he said his thoughts went to Sutter.
"I actually felt it to be a humbling experience," Keenan said. "You have to have people that have confidence in you to bring you back. As you know, I've had some controversial stops. I'm indebted to Darryl."
Keenan worked in television during his breaks in coaching and said he got picky about whether he would return to the bench.
"I wanted to come back on my own terms," he said. "I've been in a lot of tough situations recently. If I was going to go back, I wanted to be with someone that I thought was on the same page or that we could work well together."
Legitimate contender
Can the duo make the Flames a Stanley Cup contender? That's the plan, and Keenan is starting to believe it more each day.
"I was a little bit fearful when I started this year, and I think it fired right up again, so that's a neat thing," he said of his hunger for the job. "Even though we had a very hard, difficult beginning in terms of working with the group, assimilating the group, I still want to come to the rink badly every day. So I think the fire is really burning right now.
"I'm looking forward to hopefully many more years of this, because I got the passion back again and it feels good."
So maybe for Keenan, eight is enough.
In Friday's NHL action: Columbus 2, Los Angeles 1; Buffalo 3, Philadelphia 2; NY Islanders 4, Pittsburgh 2; New Jersey 3, Edmonton 1; Colorado 4, NY Rangers 3, OT; Dallas 3, Calgary 2, OT.