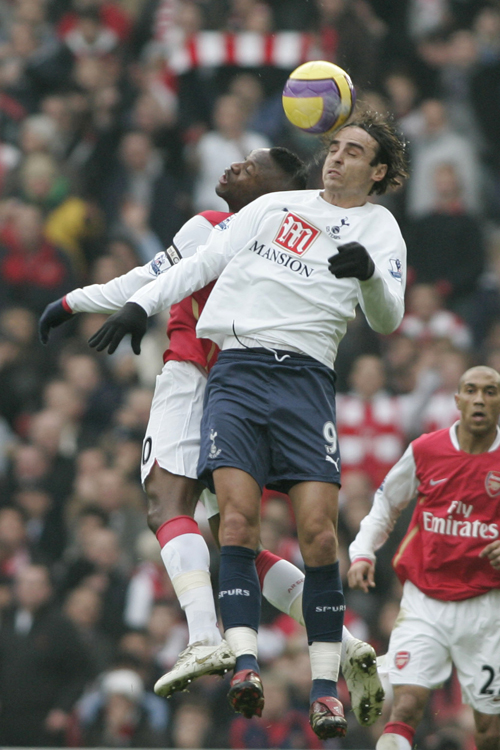 Nicklas Bendtner proved an unlikely hero for Arsenal as his late goal secured a precious 2-1 victory over Tottenham yesterday.
Arsene Wenger's side was confronting the dismal scenario of dropping two home points when the Denmark striker, on as a second-half substitute, headed in to extend his team's lead at the top of the English Premier League to four points.
That is enough to ensure Arsenal will celebrate Christmas at the top of the table, but it will do so with the help of a considerable slice of luck.
The Gunners had already seen Dimitar Berbatov cancel out the lead handed them by Emmanuel Adebayor's opener and Spurs then spurned a gilt-edged chance to forge ahead when Robbie Keane's penalty was saved by Manuel Almunia.
More sob stories
Tottenham has become wearily accustomed to such sob stories against its north London rival. This defeat stretched its winless streak against Arsenal to an astonishing 20 matches and put the brakes on the revival engineered by new manager Juande Ramos.
Christmas is always decisive in shaping a season, and Arsenal would be excused a few nervous flutters as it tucks into the turkey this week.
Trips to Portsmouth and Everton have an ominous hue for Wenger's side while points can hardly be taken for granted in the New Year's Day tussle with another local rival, West Ham.
That sequence made this encounter with a Tottenham side decimated by injuries and suspensions - Ramos was missing six regulars - even more crucial but Arsenal was desperately unconvincing.
Confronted by visitors happy to squeeze the space in midfield and rely on the bullish running and silky touch of Berbatov, Wenger's team appeared bereft of ideas.
Ragged first half
It took 34 minutes for the host to muster a shot on target, while Spurs were unrecognizable from the ragbag bunch that had succumbed so meekly to its near-neighbors at White Hart Lane in September.
But Ramos had every right to feel buoyant as he trooped off for halftime but the Spaniard will quickly realize that, where Tottenham is concerned, it is generally wise to expect the unexpected.
Sure enough, within moments of the re-start, Arsenal forged ahead with its first move of genuine quality. Cesc Fabregas collected Tomas Rosicky's slide-rule pass and rolled a delicious back-heel into the path of Adebayor. The Togo striker coolly slotted past Robinson for his sixth goal against Spurs.
It should have been the cue for Arsenal to throttle the life out of its guests but it remained curiously listless. Instead, Spurs surged back, with Keane striking the crossbar from point-blank range after being picked out by Lennon's cross.
Seconds later, Keane's expert back-heel teed up Berbatov, who lashed a fierce shot high into the top corner from an acute angle.
Now it was Tottenham that scented blood. With Arsenal still groggy, Kolo Toure's clumsy foul on Berbatov saw Rob Styles, the referee, point to the spot.
With glory in his grasp, the Irishman slammed his penalty too close to Almunia, who guessed correctly and parried to safety.
The final twist was cruel for Tottenham. After Fabregas had floated over an inviting corner, Bendtner escaped his marker Tom Huddlestone and headed firmly into the net. There was no way back.