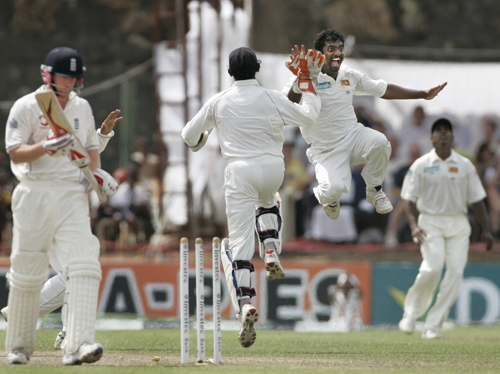 Rain rescued England from looming defeat on yesterday's final day of the third test against Sri Lanka, with the home side having to settle for a 1-0 series victory.
Alastair Cook scored a defiant 118 runs to hold together England's seconding innings, with the tourists at 251-6 - still 167 runs away from making Sri Lanka bat again - when the match was abandoned to rain.
The series victory elevated Sri Lanka to third in the International Cricket Council's test rankings, behind leaders Australia and South Africa.
South Africa takes second from England, which plunged to fifth as a result of the series loss, below fourth-placed India.
Cook was out in the final session, caught by wicketkeeper Prasanna Jayawardene off seamer Chanaka Welegedara after facing 285 balls and hitting 12 boundaries.
Earlier Muttiah Muralitharan triggered a collapse as the tourists lost three wickets in four balls to raise the home team's victory hopes.
England had moved to 200-2 during the opening session, in a form turnaround after being skittled for 81 in the first innings.
But then Muralitharan interceded, and England was reduced to 202-5 at lunch.
The collapse began in England's 65th over when Kevin Pietersen (30) drove casually against Muralitharan and was caught by Sri Lanka's captain Mahela Jayawardene at short mid-wicket.
Two balls later Paul Collingwood (0) was stumped by wicketkeeper Prasanna Jayawardene off Muralitharan.
Next ball, new batsman Ravi Bopara played a shot toward slip and took off for a run but Mahela Jayawardene made a diving stop and fired the ball to wicketkeeper Prasanna Jayawardene who took off the bails in a flash. Television umpire Asoka de Silva ruled a diving Bopara was short of his ground, giving him a pair of ducks for the test.
Muralitharan returned bowling figures 3-91, while debutant Welegedara had 2-59.
Sri Lanka's captain Mahela Jayawardene was satisfied with a 1-0 scoreline.
"I'll take 1-0 because this is an important test series for us coming back from Australia having lost 2-0," he said.
"Our guys worked very hard and I am proud with the way the team fought in this test match. It's just unfortunate, we can't control the weather," Jayawardene said.
Sri Lanka declared its first innings for 499-8 thanks to a crafty 213 from Mahela Jayawardene and 90 from Chaminda Vaas.
In reply England made its lowest ever score against Sri Lanka and was forced to follow-on.