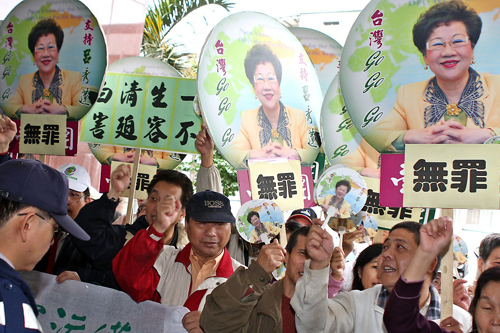 The trial of Taiwan's Vice President Annette Lu (呂秀蓮) on corruption and forgery charges for allegedly misusing an expense account opened yesterday in the latest high-profile case involving leading politicians.
Lu, who has prided herself on her clean fiscal record, is the highest-ranking Taiwanese official to stand trial on corruption charges.
Harvard-educated Lu is accused of claiming NT$5.6 million (US$174,000) in special expenses using more than 1,000 false receipts from December 2000 to May 2006.
Lu told a judge at the Taipei District Court that she had no knowledge of how her aides claimed the reimbursements, and insisted that all the funds she received were used for official functions.
Before stepping into the courtroom, Lu insisted on her innocence, saying she acted the same way as 6,500 other government chiefs entitled to special expenses.
"The judicial system remains divided in the way how the expenses should be claimed," she told reporters. "There is no reason to ask me, one individual, to bear the burden."
Lu said Taiwanese government auditors have for decades recognized special discretionary funds as subsidies for local and central government executives, allowing "loose standards" to be applied to the reimbursement payments.
"We must not allow the faults from an incomplete system of the old era to bring new disasters," she said.
Lu read a statement to reporters, complaining that Taiwan's justice system had inconsistently handled special allowance cases.
"The standards of justice are not the same," said Lu as a crowd of supporters demonstrated outside. "We hope the court can return justice to this historical collective karma."
Lu, vice president since 2000, is a 63-year-old former political prisoner and human rights advocate. She briefly stood for the Democratic Progressive Party nomination in the 2008 presidential race, but withdrew early in the process.
Two other leading members of the ruling DPP: Party Chairman Yu Shyi-kun (游錫堃), a former premier, and former Foreign Minister Mark Chen, were also indicted on corruption and forgery charges together with Lu in September.
Their trials are yet to be scheduled.
If convicted of corruption, they face a minimum of seven years in prison. The forgery charge is punishable by up to seven years in jail.
Thousands of officials in Taiwan use discretionary funds similar to the vice-president's allowance. Some of the funds require only limited filing of receipts. Questionable use of the allowance funds has set off a rash of indictments over the past year.
Frank Hsieh (謝長廷), DPP's presidential candidate and his running mate Su Tseng-chang (蘇貞昌), also a former premier, were cleared of corruption charges in September as their expenses were found to be legitimate.
Opposition leader and presidential hopeful Ma Ying-jeou (馬英九) was also indicted on the same special expense graft in February but the Taipei district court found him innocent in August. The high court is hearing Ma's case after prosecutors' appeal.
The biggest of the corruption scandals that have rattled Taiwan involves the president's wife, Wu Shu-chen (吳淑珍), who is on trial for corruption and forgery after allegedly embezzling NT$14.8 million from state coffers.
The president was named as a suspect in the case, but escaped immediate prosecution because he enjoys presidential immunity.