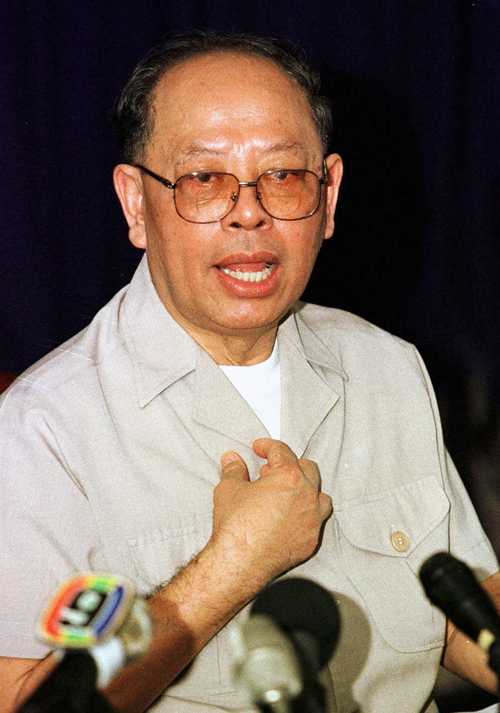 Ieng Sary, the former Khmer Rouge foreign minister taken into custody yesterday by Cambodia's genocide tribunal, was part of the communist group's inner circle, rising to power alongside its notorious leader Pol Pot.
But in the 1990s, when the Khmer Rouge was no longer in power, he defected with a large coterie of followers, effectively setting the stage for the group's collapse by the end of the decade.
His change of heart earned him a limited amnesty but left open the question of how much responsibility he bore for the atrocities the Khmer Rouge regime committed in the late 1970s, when 1.7 million Cambodians died of starvation, disease, overwork and execution.
As deputy prime minister and foreign minister of the regime, Ieng Sary was one of a few key decision makers in the group's policy-making central committee.
He has long been accused of personally persuading several diplomats and intellectuals based overseas to return to Cambodia to join the revolution after the Khmer Rouge overthrew a pro-American government in 1975. The returnees were arrested and put in re-education camps, and most were later executed.
Ieng Sary, born as Kim Trang on Jan. 1, 1930 - the date is sometimes disputed - in a former Cambodian province that is now part of southern Vietnam, received a government scholarship in the 1950s to study in France.
In Europe he joined a Marxist study group, and when he returned home in 1957 he became involved in clandestine communist activities.
He married Pol Pot's sister-in-law, Ieng Thirith, who was also taken into the tribunal's custody yesterday. Ieng Thirith served as social affairs minister for the Khmer Rouge.
While Pol Pot was known as "Brother No. 1," and Nuon Chea, the movement's chief ideologist - arrested in September - was "Brother No. 2," Ieng Sary was "Brother No. 3."
Yet Ieng Sary has long denied any responsibility for the Khmer Rouge atrocities. At a press conference following his defection to the government in 1996, he said Pol Pot "was the sole and supreme architect of the party's line, strategy and tactics."
"Nuon Chea implemented all Pol Pot's decisions to torture and execute those who expressed opposite opinions and those they hated, like intellectuals," Ieng Sary claimed.
"Do I have remorse? No," said Ieng Sary. "I have no regrets because this was not my responsibility."
But scholars and genocide researchers believe otherwise.
Known by his revolutionary alias as "Comrade Van," Ieng Sary received many internal Khmer Rouge documents detailing torture and mass execution of suspected internal enemies, according to the Documentation Center of Cambodia, an independent group gathering evidence of the regime's crimes but not connected to the tribunal.
"We have cleaned up the internal traitors and extracted confessions from them. We are gradually continuing to wipe out the remaining enemies, who are opposed to our revolution overtly or covertly," read a cable addressed to Ieng Sary in 1978, apparent evidence that he had full knowledge of the bloody purges.
In August 1979, eight months after a Vietnam-led resistance movement overthrew the Khmer Rouge regime, Ieng Sary was sentenced to death in absentia. The Hanoi-installed government's court, made up of early Khmer Rouge defectors such as Hun Sen, the current prime minister, held the proceedings in the fashion of a Soviet show trial, and served the purpose more of propaganda than justice.
The Khmer Rouge carried on fighting a guerrilla war from the jungle after their ouster, even after signing a peace agreement in 1991. Confined to a dwindling number of strongholds, mostly in border areas, and increasingly reduced to acts of banditry, Ieng Sary became the first member of the inner circle to defect. In August 1996 he seized control of thousands of Khmer Rouge guerrillas and the gem-rich area they controlled along the Thai border.
A month later, at the request of Prime Minister Hun Sen, the king rewarded Ieng Sary with an amnesty for breaking away from his comrades-in-arms. The amnesty lifted the death sentence against Ieng Sary and granted him immunity from prosecution under a 1994 law outlawing the Khmer Rouge.
Ieng Sary's amnesty was one of many contentious issues that dragged out the negotiations between the Cambodian government and the United Nations to establish the genocide tribunal.
The government was reluctant to make a clear commitment to revoke Ieng Sary's amnesty for fear it could trigger dissent among former Khmer Rouge followers, jeopardizing peace and stability.
But in June 2003, it agreed with the U.N. on the tribunal pact, which includes a clause saying the government "shall not request an amnesty or pardon for any persons who may be investigated for or convicted of crimes referred to in the present agreement."